While China has attracted much attention and criticism over its handling of the coronavirus outbreak, governments everywhere pose a risk for human rights with their own responses, advocates warn.

Roads remain empty in Wuhan, China, in late January, as the first coronavirus lockdown was enacted. Countries around the world later followed the measure.Credit:Getty Images

Cambodia, for instance, has detained a journalist and arrested other citizens for spreading “fake news” about the coronavirus, Human Rights Watch said. Philippines President Rodrigo Duterte threatened to shoot people who don’t comply with a lockdown.

Hungary passed a law that extends the government's emergency powers indefinitely, suspends elections, and gives government’s the power to jail journalists for “distorting” information on the pandemic, according to the COVID-19 Civic Freedom Tracker, an index created by the International Centre for Not-for-Profit Law.

Even democracies like Australia have the power to punish individuals for violating biosecurity rules.

Yet China’s relationship with the World Health Organisation shows the power authoritarian regimes have to use international groups to encourage wide acceptance of their actions.

The WHO has made statements seen as legitimising Beijing’s response to the pandemic, even as the Chinese government controversially denied the extent of it. Taiwanese officials said WHO shrugged off its warnings about the virus because China rejects Taipei's diplomatic status as an independent country.

China "has the power to capture and influence the agenda of international institutions," such as WHO, said Roberto Gonzalez of New York-based Human Rights Foundation.

China is not alone.

“Authoritarian regimes like … Russia, Saudi Arabia, Iran, Cuba, and Venezuela are very efficient at gaining highly coveted seats at international bodies, which they consistently use to exercise a heckler’s veto and prevent any significant exposure of their horrendous human-rights records,” Gonzalez said. 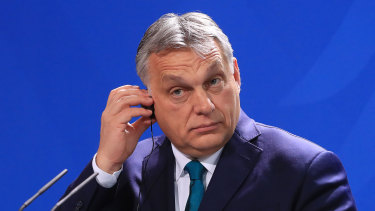 Hungarian Prime Minister Viktor Orban has been accused of seizing near-absolute power because of the coronavirus.Credit:Bloomberg

Starting on Monday, New York time, Human Rights Foundation is holding COVIDCon, to explore how "tyranny sparked and is exploiting the novel coronavirus pandemic to crack down on civil liberties."

Open to the public, the COVIDcon will be a virtual event, involving activists and advocates such as Hong Kong democracy activist Joshua Wong and writer Anne Applebaum.

The focus of the virtual convention reflects the contested nature of news around coronavirus.

Since the pandemic’s emergence, Beijing has also backed a multi-channel global information campaign to deflect responsibility and build a benevolent image around the world. 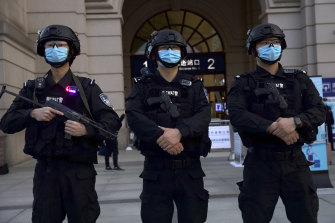 Riot police officers stand guard outside Hankou train station ahead of the resumption of train services in Wuhan on Wednesday.Credit:AP

Antony Dapiran, author of City on Fire: The Fight for Hong Kong, said: “It is a move that the Hong Kong government would no doubt have loved to have taken last year in the midst of seven months of pro-democracy protests that the government was powerless to stop.”

Once the pandemic recedes, liberal governments will be expected to remove the restrictions as soon as practicable, he said.

“Authoritarian regimes may take this opportunity to ‘normalise’ these restrictions on civil society and to keep them in place longer – or perhaps even permanently,” he said.

With this unknown confronting democracy, the defence of human rights must look outside captured multi-lateral fora, said Gonzalez.

“Frustrated civil society has been taking matters into their own hands to promote and advance human rights,” said Gonzalez.

HRF, for example, collaborates with activists in countries to support their pro-democracy and human rights.

“In the absence of efficient multilateral institutions that put human rights first, civil society should and must step up to hold those in power accountable,” Gonzalez said.

Budapest-based academic Peter Kreko says that leaders in general have gotten more support from voters at the outset of the pandemic.

"Authoritarian leaders in the East and the West alike are abusing the situation," by silencing critical voices, entrenching their own positions in power, and draining public finances while there is less scrutiny.

"Paying attention to these trends and keeping authoritarian leaders under pressure is crucial these days to avoid the spread of corona-autocracies," Kreko said.