Government school families are being warned that a decline in voluntary payments from parents this year could force schools to cut curricular programs such as food technology and visual art, leading to “stale and beige” education for Victorian children.

Caulfield secondary school Glen Eira College wrote to parents on Friday warning that it had already spent its annual budget in voluntary payments from families and was reviewing whether it will have to cut some programs next year. 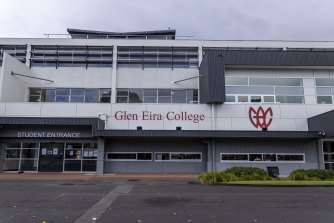 Glen Eira College parents have been warned the school might have to cut programs next year due to a lack of funding.Credit:Wayne Taylor

State school principals last year expressed alarm when the Department of Education and Training toughened its policy on parent payments, banning schools from pressuring them to make voluntary contributions on curricular essentials.

Glen Eira College principal Sheereen Kindler and council president Stephen Loyer said parents had contributed just 33 per cent of what the school had budgeted from voluntary payments this year.

“This has fallen well below past years’ support which reached approximately 80 per cent,” they wrote in a letter to parents.

“This important financial support for the school remains a key component to sustain our high-quality programs, which your children have benefited from over many years.”

The list of programs and materials that Kindler and Loyer said were in jeopardy include productions, concerts, art shows, house sports competitions and lunchtime clubs. Library books, digital subscriptions, IT resources and materials for subjects such as food technology, visual arts, photography and materials technology all rely on contributions from parents, the letter said.

Australian Principals Federation Victorian president Tina King said the department’s changes to how schools can seek contributions, including capping the number of times schools can ask parents for money, have had an adverse impact.

King said government schools rely on parental contributions to offer activities that enrich the curriculum for their children. Without them, learning can be “pretty stale and beige”, she said.

“Learning is free, teaching is free, but experiences are not, they cost money,” King said. “Schools get a budget with provisions for staffing and some minimal facilities maintenance, but anything that is above and beyond that has to be paid for from outside a school’s budget and that comes from locally raised funds.” 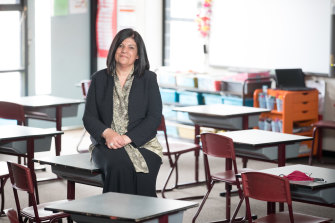 But Parents Victoria executive officer Gail McHardy said schools were making a mistake in resorting to urging parents to dip into their pockets. She said state schools should not pressure parents to pay more to support their children’s education, even if the school is short of funds.

“Schools being transparent with parents about their spending is important, but playing the desperation card, and putting that pressure back on to parents to pay, is not helpful, because every family will have a different financial situation,” McHardy said.

“The only way it is going to be addressed is if both state and federal governments fix the SRS [schooling resource standard] for public schools, because there is a complete imbalance and the public are not asleep, they’re awake to it.”

The schooling resource standard is an estimate of how much public funding a school needs to meet its students’ educational needs and forms the basis of Commonwealth and state education funding. Under the current agreement, Victorian schools receive less than 90 per cent of that funding per student and are on track to rise to 95 per cent by 2029. Non-government schools receive more of their SRS needs and are on track to reach 100 per cent.

Glen Eira College asked parents for a voluntary payment of $140 last year, to go toward “general contributions”, facilities maintenance and a building fund.

College parent Susannah Farfor said it was devastating to think that the school might have to cut back on popular programs it had spent 10 years building up, such as student lunch clubs in robotics and sharemarket trading.

She said the downturn in parent payments followed two years in which the school had struggled to raise funds through fetes because of COVID-19 lockdowns.

Farfor said paying a voluntary contribution to the school was like “paying it forward”.

“The facilities, programs and other activities that students get to enjoy were funded through the contributions of previous families,” she said.

A department spokesperson said all Victorian government schools are fully funded to give all students guaranteed free access to the required curriculum.

“The Victorian government recognises parent payments provide a valuable contribution to enriching a student’s educational experience and allow schools to offer a diverse range of programs and opportunities to their communities,” the spokesperson said.

“Schools can continue to request voluntary financial contributions from parents to support their schools and their program offerings.”