A passenger plane carrying at least 27 people has crashed into the ocean in far eastern Russia.

The Antonov An-26 aircraft, operated by Kamchatka Aviation Enterprise, departed from Petropavlovsk-Kamchatsky airport shortly before 1pm Tuesday and was preparing to land at Palana when it dropped out of radio contact around 3pm.

Two helicopters, a plane and naval vessels were dispatched to try and find the aircraft, before discovering the crash site in the Sea of Okhotsk as night fell.

Six crew and at least 21 passengers – including a child under 12 – were on board, according to Russian reports. Some put the number of passengers as high as 23, including a second child. 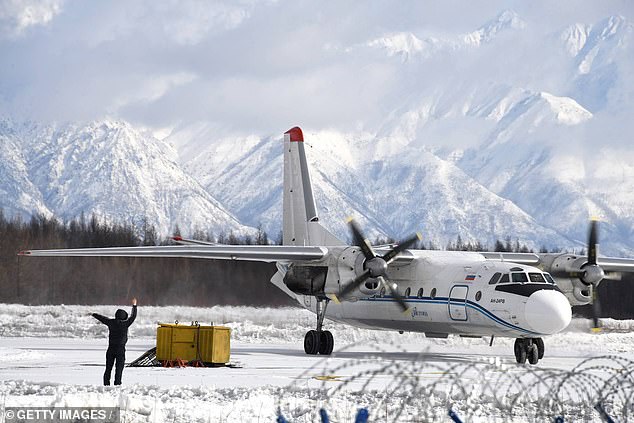 An Antonov An-26 plane, operated by Kamchatka Aviation Enterprise (file image), dropped out of radio contact while flying across far eastern Russia on Tuesday afternoon

Several senior officials from Palana village are said to have been on board the flight, including head of the administration Olga Mokhireva, 42, head of the mobilization department Alexander Andreikin, and his wife Olga Andreikina, who heads the financial department.

The pilot was named as Dmitry Nikiforov, and the co-pilot Alexander Anisimov, 27.

A mother-of-three is also believed to have been among the passengers.

It is not yet clear how the plane crashed, as visibility was good at the time with only low cloud and light winds.

The plane also had a certificate of airworthiness and had passed pre-flight checks, officials said.

Rescuers are thought to have found the plane after detecting a radio signal that was coming from its emergency beacon.

Regional deputy transport minister Anatoly Bannikov, said: ‘[The plane] was supposed to arrive at the Palana airport at 15:05 (local time).

‘The plane did not arrive at the appointed time.

‘According to updated data, there were 28 people on board… six crew members and 22 passengers, including one child born in 2014.’

Russian prime minister Mikhail Mishustin ordered a special commission to find out what had happened to the plane. 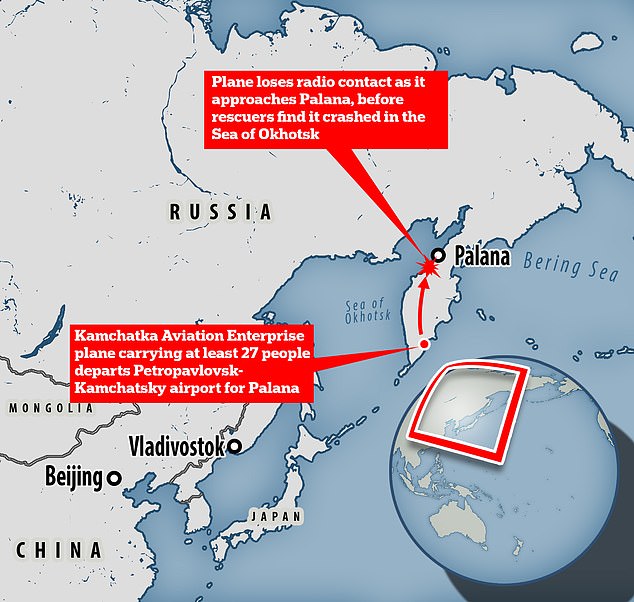 The plane was coming in to land at Palana airport when it vanished, before a crash site was discovered in the Sea of Okhotsk several hours later

A criminal case was also launched into its fate, a normal measure when a plane goes missing or crashes in Russia.

Russia, once notorious for plane accidents, has improved its air traffic safety record in recent years.

The last major air accident took place in May 2019, when a Sukhoi Superjet belonging to the flag carrier airline Aeroflot crash-landed and caught fire on the runway of a Moscow airport, killing 41 people.

In February 2018, a Saratov Airlines An-148 aircraft crashed near Moscow shortly after take-off, killing all 71 people on board. An investigation later concluded that the accident was caused by human error.

Flying in Russia can also be dangerous in the vast country’s isolated regions with difficult weather conditions such as the Arctic and the Far East.

The vanished plane was produced in 1982 and was owned by Kamchatka Aviation Enterprise, said local transport officials.

It has a valid certificate of airworthiness, they said.

The Soviet-era workhorse planes are widely used in remote areas of Russia.

The pilots were eventually found guilty, as they had alcohol in their blood.