Just three weeks ago – although it seems like a lifetime ago now – 250,000 people amassed over four days at the famous Cheltenham racing festival in Gloucestershire.

They spent that time huddled together in large groups, drinking, eating and gambling. In fact, it was the biggest party in Britain this year.

And everyone there was also breathing, spitting, coughing and drooling over each other, despite the world being engulfed by a deadly and highly virulent new type of flu called Coronavirus and numerous cases had begun to be recorded in this country.

I was astonished the festival was allowed to go ahead and said so forcefully at the time on Good Morning Britain.

‘How can anybody tell me, as this outbreak is beginning to erupt, that kind of gathering of people in close proximity is a good idea?’ I asked on March 11, the same day the World Health Organisation officially labelled Coronavirus a global pandemic.

‘What are the chances that some of the 60,000-odd people each day has the virus? I’d say reasonably high. The health of our elderly and those with underlying health problems should be more important than people going about having jollies.’

Today, those words look horribly prescient as the virus has begun to explode in Britain in a way that may end making Italy look not so bad by comparison. 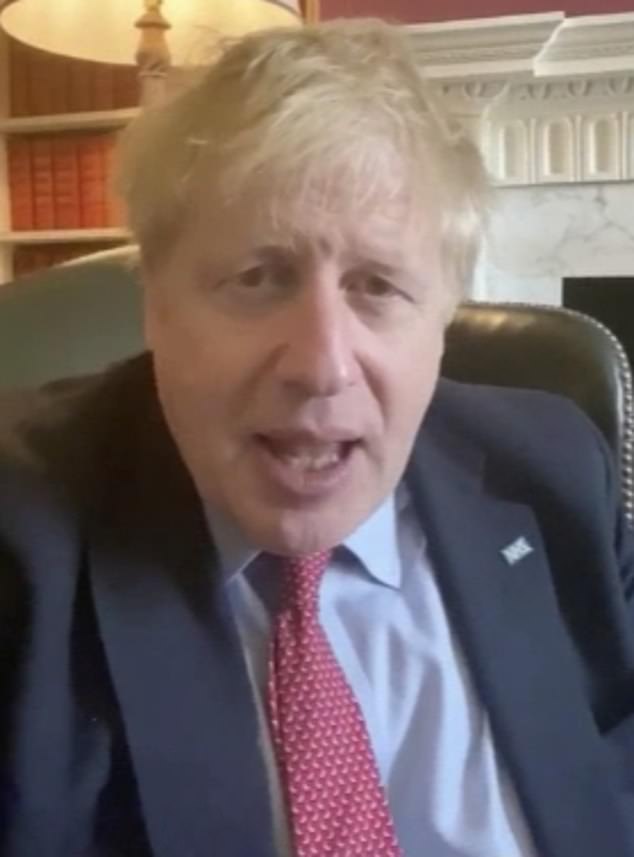 I don’t repeat them to make myself look smart, because anybody with a tiny ounce of common sense should have reached the same conclusion as I did that day.

What’s staggering is that Boris Johnson didn’t understand how mad it seemed.

Johnson is big on common sense.

Through his entire adult life, the British Prime Minister has repeatedly urged us all to display it, particularly during the interminable Brexit saga.

It’s been inextricably fused into his DNA, both as a journalist and then as a politician.

So, it’s incomprehensible to me that when faced with the biggest challenge of his life, Johnson seems to have abandoned any semblance of it.

Let’s not mince words here: his Government’s strategy to combat Coronavirus has been a complete fiasco from start to finish. 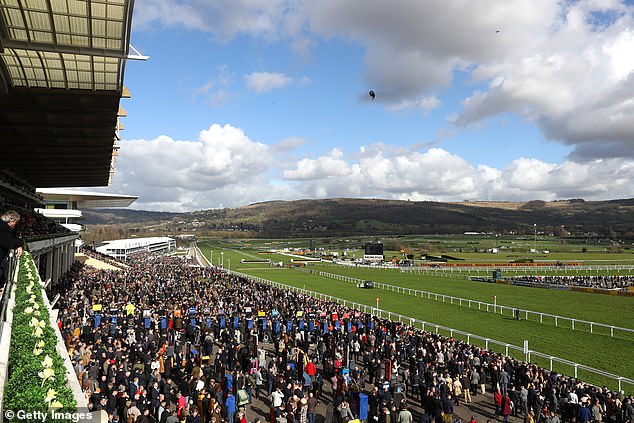 The stands at Cheltenham Race Course are pictured full of people on March 13, before the UK was put on coronavirus lockdown

And now I fear the appalling complacency, abject failures to properly prepare, and horrendous mixed messaging have dragged Britain sleep-walking into a potential catastrophe.

Johnson, who is currently self-isolating at No10 Downing Street having tested positive for the virus, can’t say he wasn’t warned.

The WHO first declared Coronavirus as ‘global emergency’ on January 30 as the infection and death toll in China – where it began – began to explode.

The first UK case of Coronavirus was confirmed the next day, January 31.

By March 3, it was raging across the globe with terrifying speed and ferocity, with over 100,000 cases reported, and over 3000 deaths.

Yet that day, Boris Johnson appeared in front of the British public and announced all we had to do to fight the virus was wash our hands.

In a jarringly jovial press conference, he smirked as he boasted of spending a recent night ‘shaking hands with everybody’ at a hospital containing Coronavirus patients, and saying he intended to carry on shaking hands. 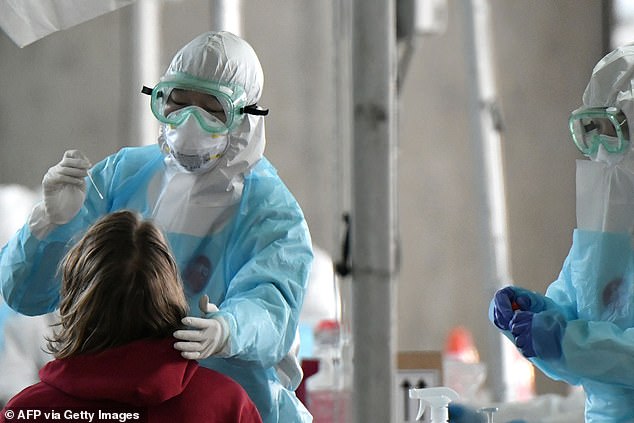 Testing by medics in full hazmat protective suits is pictured being carried out today in Seoul, South Korea, where testing is much higher than the UK

At the time, I expressed serious concern about this absurdly flippant attitude, but Johnson insisted he was ‘following the scientific evidence and advice.’

He was supported by Health Secretary Matt Hancock who said: ‘The impact of shaking hands is negligible.’ Hancock also now has the virus.

It’s little wonder, given how casual these two men were then about the threat of coronavirus, that they were equally laid back about the Cheltenham Festival.

The Government, it was confirmed by the Chief Scientific Officer Sir Patrick Vallance, was pursuing a policy of ‘herd immunity’ designed to deliberately allow the virus to infect tens of millions British people.

Extraordinarily, the Government also announced on March 13 that we would no longer be testing anyone but those already seriously ill in hospital, in direct contravention of WHO guidance that the best way to get on top of coronavirus is to ‘Test, test, test.’

Yet our entire strategy was dramatically reversed on March 16 after a report by infectious disease scientists at Imperial College – who had promoted the herd immunity tactic – concluded it would in fact be a total disaster which might cost 500,000 lives.

It’s hard to imagine a more shuddering U-turn, particularly given most other countries in the world were already operating a policy of suppression via lockdowns.

And it’s also crystal clear now that those weeks we spent on such a dangerously ill-conceived ‘sit back and let them all get it’ strategy cost us incredibly valuable time to adequately prepare.

As a direct consequence of this shameful strategic failure, Britain has been left fighting a war with our hands tied behind our backs, with nowhere near enough coronavirus tests, Personal Protective Equipment for health workers, or ventilators which are the determining factor as to whether many coronavirus patients live or die. 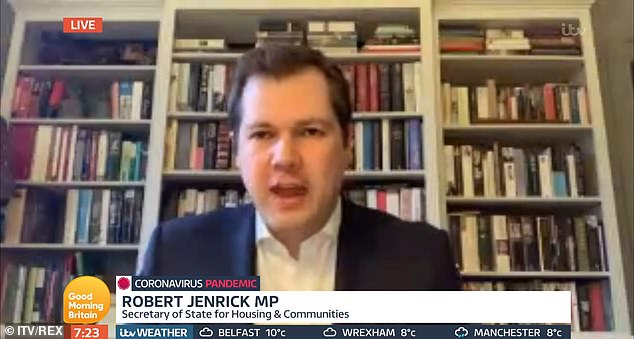 Today, my GMB co-presenter Susanna Reid and I interviewed Government Housing Secretary Robert Jenrick and asked him basic questions about the state of Britain’s current resources to fight the virus, and our strategy.

To call his responses a train-wreck would be the understatement of the year.

He confirmed we’re currently testing with the anti-gen virus tests just one tenth (8,000 or so per day) of the number Germany (80,000) is testing – though couldn’t explain why.

I can: we were too late to order it, and now we’re back of the queue as most other countries got in first.

But worse than that, there is plenty of evidence that we COULD still be testing many more NHS workers if it wasn’t for the fact that Public Health England have rejected offers of help and are insisting that all testing is done centrally through a unit that isn’t even up and running yet.

Meanwhile they have still not approved quick, cheap and easy antibody test kits that could be given to hundreds of thousands more people to tell if they’ve already had the disease and final determine how widespread the infection is, despite there being British manufacturers ready and willing to sell them.

Again, Germany is starting a scheme to test hundreds of thousands of its people.

In the meantime the British manufacturers are being inundated with orders from private companies who tend to have a greater sense of urgency than do our health service bureaucrats.

This chronic lack of testing means we have no idea how many people have the virus, or have had it, and without that information it’s impossible to let people go back to work and restart the economy which will be crucial to our ability to recover when this is all over.

More worryingly in the immediate moment, it also means most health workers can’t be tested and many are therefore forced to self-isolate for two weeks if they or a household member shows a symptom, without even knowing for sure they have it.

One paramedic this week revealed he and his three fellow paramedic flatmates have all been forced to do this – taking them off the frontline for 14 days at the most intense, vital time.

NHS workers have been up in arms about the shocking shortage of PPE, their fears for their safety compounded by the knowledge that 52 doctors have already died from coronavirus in Italy, and three have now died in the UK.

Yet all they hear from the Government is endless mealy-mouthed promises that the kit is coming, knowing for many of them it will come too late.

As for ventilators, numerous hospitals, especially in London which is the UK virus epicentre, have already run out – meaning doctors are having to make agonising decisions as to who lives and who dies.

And that’s before the coronavirus bomb has even really gone off.

I fear the worst, by far, is still to come.

Britain is lagging two weeks behind Italy but tracking at the same death rate, and we have a significantly less highly rated health system.

I don’t scare easily but I am genuinely afraid about what is coming and our ability to handle it.

And that fear has been massively compounded by the Government’s shocking handling of the crisis.

Even now, ministers continue to send terrible mixed messages – urging us all to ‘stay at home to save lives’ but then telling non-essential workers to go to work.

This has led to ridiculous scenes on public transport with thousands of people cramming into trains like lambs to the virus infection slaughter.

How can this possibly make any sense?

And we’re not even checking or quarantining people at our airports who continue to fly in from the worst virus-ravaged places like Italy or New York.

This too is insane.

All of this nonsensical decision-making is being driven by our supposed experts.

The Times today revealed the government’s top scientists, the ones Boris Johnson has been so heavily relying on including top Imperial ‘data modeller’ Neil Ferguson, judged Coronavirus to be only of ‘moderate risk’ at a teleconference on February 21, and didn’t even raise the country’s level to high risk.

By that day, 2,236 people had died from the virus in China, myriad other countries were experiencing outbreaks, and cruises ships like Diamond Princess were being swarmed by it.

This, we now know, was a disastrously wrong analysis, as was the ‘herd immunity’ strategy, refusal to order social-distancing, and the decision to stop mass testing.

To use the vernacular of Cheltenham Festival race-goers, Boris Johnson’s been backing the wrong scientific horse and it’s time he stopped trusting his dreadful ‘expert’ tipsters and trusted his own common sense.

I would immediately stop all non-essential workers going to work, strictly enforce strict 2-metre social distancing on public transport, and close our airports.

Then I would quadruple our efforts to get tests, PPE equipment and ventilators, so we arm our NHS with the tools they need to fight this hideous war.

It’s beyond belief that online supermarket Ocado can buy 100,00 private tests for its staff, as it did this week, when health workers can’t get them.

Right now, Britain is a country of heroic NHS lions led by dangerously incompetent donkeys – and many thousands of people are going to die as a result, including many of those trying to save them.