Western Australia’s environmental watchdog is calling for public comment on a bid to stop the removal of pine trees over the state’s biggest underground water source due to fears it will result in the starvation of endangered cockatoos.

Scientists and environmental activists have called for a moratorium on felling the trees at the Gnangara Mound, a major food source for Carnaby’s black cockatoos, while the Environmental Protection Authority process is under way. 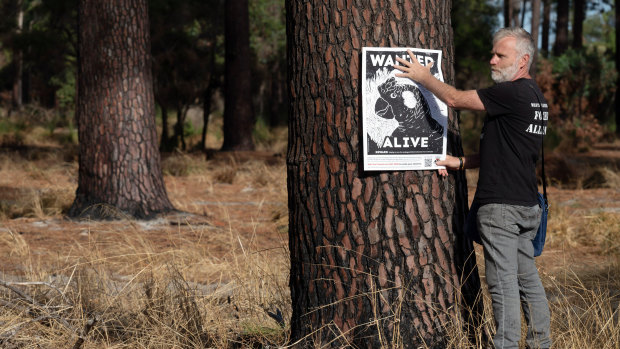 The cockatoos rely on the pines as a food source after urbanisation and fires destroyed much of their natural habitat, such as banksia woodlands.

The mound – which supplies almost 300 gigalitres of water annually to homes, businesses and horticulture in Perth – has struggled to refill due to a decline in rainfall, and 23,000 hectares of pine trees, cut down for use in the building industry, have not been replaced after it was decided they used up too much of the declining resource.

But Curtin University law lecturer and biologist Dr Hugh Finn said he was concerned if more trees were cut down and not replaced, it would be the “death knell” for the endangered black cockatoos.

His concerns prompted him to apply to the Environmental Protection Authority in June in a “last-ditch” bid to stop the remaining trees being cut down, arguing the state government not replanting the trees equated to a change in land-use and should not be allowed.

He was told he would have a response 28 days later, but instead the process took months, and the pines continued to be removed.

Finn received a response in December confirming his submission would be published for public comment “shortly”. The authority told WAtoday it would publish it for a seven-day period before the end of the year.

“It has been a frustrating and lengthy process,” Finn said.

“At the last roost count there was around 5000 [black cockatoos] crammed into the remaining patches of pines, and they polish off the food source available very fast.”

EPA chairman professor Matthew Tonts said the process had been drawn out due to consultation with agencies like the Department of Biodiversity, Conservation, and Attractions, and the Department of Water and Environmental Regulation, to determine whether the referral was valid.

If the authority decided to investigate further after the seven-day public consultation period, it could take until the end of 2023 for any action to be taken, when the state’s current Forestry Management Plan expires.

“We are calling on a moratorium on cutting down the remaining trees while we wait, otherwise by the time we reach the end of 2023, the trees will be gone,” Finn said.

His call was supported by Save the Black Cockatoos coordinator Paddy Cullen.

“This species is meant to be a priority, but it has not been made one,” he said.

“There has been a huge decline in population across the Perth and Peel region over the past decade, and they are spiralling towards extinction as their major food sources, including native banksia woodlands, dwindle.

“The pines at Gnangara Mound are the last feeding habitat in the area, and it is going under the bulldozer every day. We need a moratorium on this process if we have any chance of saving the population.”

Questioned on the possibility of enforcing a moratorium, the state government said it would be inappropriate to comment while Finn’s application was in the early stages of being reviewed.

A film titled Black Cockatoo Crisis has been made, in the hope of raising further awareness about the plight of the species.