Heroic villagers who quarantined themselves amid the outbreak of the Black Death in the 17th century are at the heart of a new poem on the coronavirus by the poet laureate.

Simon Armitage’s latest work, Lockdown, references how people in the Derbyshire village of Eyam, who were affected by the plague in 1665, took a series of selfless steps to help minimise the spread.

The poem tells how those who were infected left money soaked in vinegar – which was believed to kill the disease – was placed by villagers in exchange for food and medical supplies. 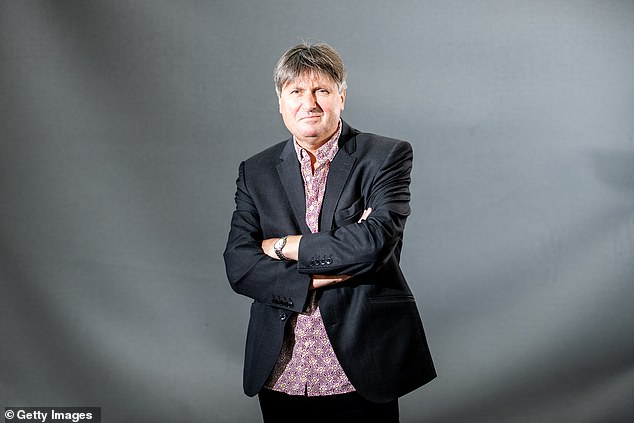 Poet laureate Simon Armitage, pictured, references the selfless heroics of the villagers of Eyam during the Black Death in his new poem, Lockdown, about the coronavirus crisis

And I couldn’t escape the waking dream of infected fleas

the Boundary Stone, that cock-eyed dice with its six dark holes,

Which brought to mind the sorry story of Emmott Syddall and Rowland Torre,

star-crossed lovers on either side of the quarantine line

whose wordless courtship spanned the river till she came no longer.

But slept again, and dreamt this time

of the exiled yaksha sending word to his lost wife on a passing cloud,

a cloud that followed an earthly map of camel trails and cattle tracks,

embroidered bedspreads of meadows and hedges,

the hieroglyphs of wide-winged cranes and the glistening lotus flower after rain,

the journey a ponderous one at times, long and slow but necessarily so.

It touches on the tragic tale of two lovers – one from Eyam and one from a neighbouring village – who were no longer able to visit due to the plague, so met secretly at a distance, until one stopped appearing, having fallen foul of the disease.

Lockdown also references Sanskrit poet Kālidāsa’s work, Meghadūta, in which an exile uses a passing cloud to send a message of comfort to his wife.

‘The cloud is convinced to take the message because the yaksha, which I think is sort of an attendant spirit to a god of wealth, tells him what amazing landscapes and scenery he’s going to pass across. I thought it was a kind of hopeful, romantic gesture,’ Armitage told The Guardian.

He said he thought a message about patience, as opposed to the frantic way of life we are often used to, could be learned with regards to dealing with the ongoing Covid-19 crisis.

Speaking about poetry more widely, he described it as ‘consoling’ in the way it urges people to focus and comtemplate issues.

‘Poetry is often about detail, even to the point where there’s just something sacramental in the ordinary descriptions of everyday life,’ he added.

‘In the relationship with thoughtful language, something more thoughtful occurs.’

Among the measures used by the villagers to control the spread of the plague was the boundary stone, which acted as a marker between Eyam, which was widely infected, and nearby Stoney Middleton which had not been hit.

The stone had six holes drilled into its surface, where money soaked in vinegar – which was believed to kill the infection – was placed by villagers in exchange for food and medical supplies.

The disease raged for more than a year in Eyam, claiming at least 260 lives, but the villagers were hailed for showing immense self-sacrifice and personal courage, and preventing the plague from spreading to other parishes.

Almost 350 years later a remembrance service is still held every Plague Sunday at Cucklett Delf, on the edge of the village.

Meanwhile, the tale of Emmott Syddall and Rowland Torre’ centres around two lovers who visit each other in the infected village, but soon realised it was too dangerous, and so would instead arrange to meet secretly, at a distance.

The pair were said to have only looked at each other, in silence, in fear of their plan being uncovered.

At the end of April 1666, Emmott stopped appearing, but Rowland would continue to go to their meeting place, in the hope of seeing her again.

He was one of the first people to re-enter Eyam when it was declared safe towards the end of the year, but then found out his sweetheart had died that April.