An investigation is under way after two men were killed in a car crash during a police pursuit earlier today.

The car, believed to be a BMW, ploughed into a road barrier near Brighouse Bus Station in West Yorkshire, at around 1am as it fled from officers in a West Yorkshire Police vehicle.

The incident has been referred to the Independent Office for Police Conduct (IOPC) after the two male occupants of the car, believed to be in their 20s, died.

In a statement today the police watchdog said: ‘We understand, at this time, that a West Yorkshire Police vehicle began a pursuit of a car in the centre of Brighouse. A short time later the car crashed into a road barrier on Bradford Road. 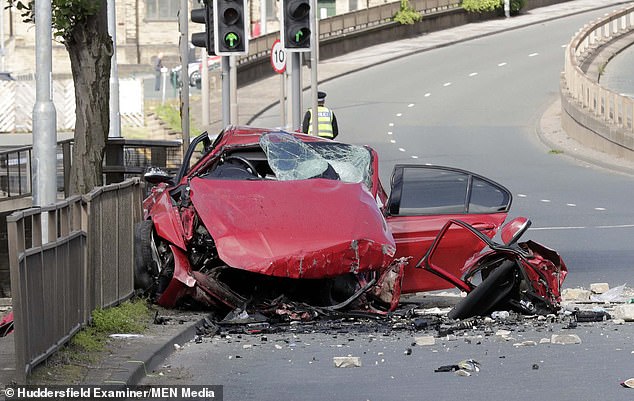 The Independent Office for Police Conduct has begun an investigation two men were killed when their car crashed into a road barrier in Brighouse, West Yorkshire, during a police pursuit 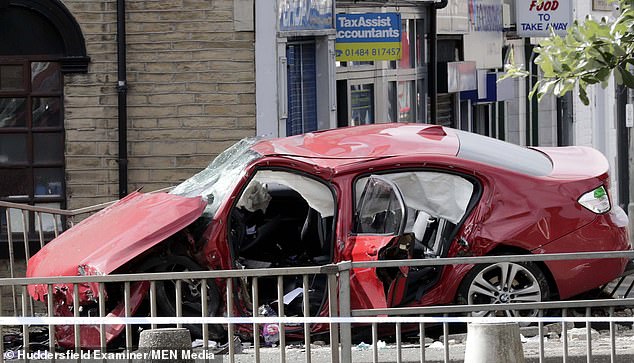 The vehicle, which appears to be a BMW, ploughed into the road barrier at around 1am today

‘The two male occupants of the car, believed to be in their 20s, have since sadly died.

‘Their next of kin have been informed and we will be making contact with them to explain our role.’

The mangled wreckage was later lifted onto a lorry and Calderdale Council said the road had been reopened.

Today the IOPC regional director Miranda Biddle said the police watchdog had begun an investigation to ‘establish and examine the circumstances of what happened’.

She said: ‘This is a tragic incident and my thoughts are with the men’s family and friends and all those affected, including the emergency services in attendance. 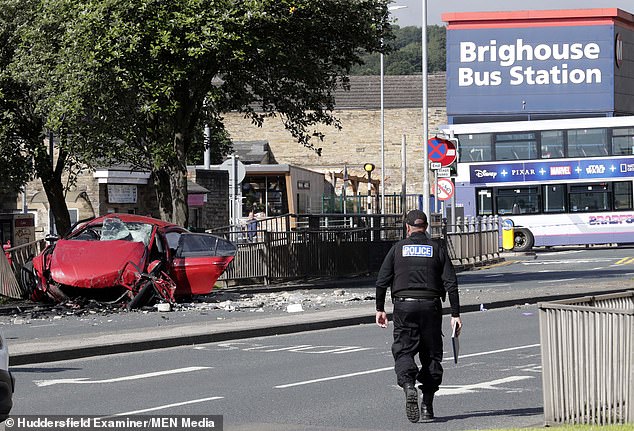 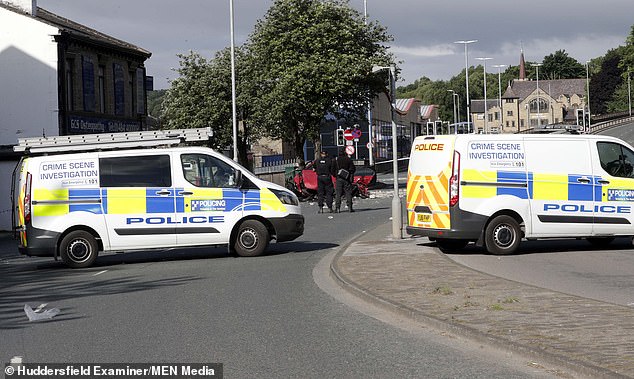 Pictured: Crime Scene Investigation officers arrive to the scene after two men died in a car crash during a police chase

‘We sent investigators to the scene and to the post-incident procedures, where the two officers in the police vehicle provided statements to us.

‘It is mandatory, when someone dies following police contact, that the matter is referred to the IOPC.

‘Our role is to establish and examine the circumstances of what happened; this work is already under way, and West Yorkshire Police is co-operating fully with our inquiries.’

West Yorkshire Police said in a statement: ‘Emergency services are currently at the scene of a serious road traffic collision in Brighouse.

‘At 1:07am today a car containing two male occupants was involved in a collision in Bradford Road, in Brighouse town centre.

‘Due to the involvement of a police vehicle in the circumstances leading up to the collision, the incident has been referred to the Independent Office for Police Conduct.’