Police believe there are gaps in the law when it comes to “grab and drag” offending after public outrage over the sentence given to a man who pulled a nurse into a Melbourne alleyway.

The Victorian Law Reform Commission was asked late last year by former attorney-general Jill Hennessy to examine whether the state needed a new “grab and drag” offence following community concern about the outcome in the case of Jackson Williams. 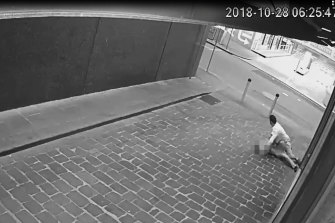 The woman was held down in the daylight attack.Credit:

The 21-year-old was found guilty of common law assault after he grabbed a woman from behind and dragged her into a laneway off Little Lonsdale Street in 2018. He put his hand over her mouth as he lay on top of her during the terrifying 37-second ordeal, which was captured on CCTV footage.

Williams was acquitted of intent to commit a sexual offence and sentenced for common assault by County Court judge Amanda Fox to 42 days in prison, which he had already served, and a 2½-year community corrections order.

The Office of Public Prosecutions “carefully reviewed” the case and did not appeal, saying the sentence did not fall outside the range of available sentences for common assault.

Following the sentence, Justice Party MP Stuart Grimley presented a petition to Ms Hennessy with more than 100,000 signatures calling for a new “grab and drag” offence to fill a perceived gap between sexual assault and common assault.

However, in submissions made to the commission’s review, legal industry groups argued the existing legislation captures the conduct of “grab and drag” and no changes are needed.

The law reform commission characterises “grab and drag” as the act of physically restraining or seizing a person, and pulling or moving them, against their will.

In Victoria Police’s submission to the inquiry, which did not comment specifically on the Williams case, the force argued reform was “necessary and appropriate” to address the serious nature of “grab and drag” actions on victims.

“Often, this type of behaviour provides a predicative marker of an escalating pattern of behaviour by an offender, that may lead to further serious offending, including but not limited to sexual offending, and homicide,” the submission stated.

While police don’t support the creation of a new offence, they called for the establishment of new “aggravating circumstances” which can be applied to the offence of common assault, and set out a proposal about how it could work in practice.

However, submissions made by the Law Institute Victoria, Victoria Legal Aid, Criminal Bar Association, the Office of Public Prosecutions and Liberty Victoria all questioned the need for the creation of a new offence and expressed concerns that it could create unnecessary complexity.

President of Liberty Victoria Julia Kretzenbacher said they believed the current offences covered the type of conduct targeted by the proposed laws.

“A ‘grab and drag’ offence would unnecessarily over-complicate the prosecution of this kind of offending,” she said. “It is well known that ‘hard cases make bad law’ and any proposed ‘presumed intent’ offence would undermine the presumption of innocence and flip the burden of proof.”

Mr Grimley told The Age that Victoria must take the offence of “grabbing and dragging” seriously to ensure offenders don’t go on to commit more serious crimes and ensure women can walk the streets without fear of being attacked.

Others who believed a new offence was necessary included Victims of Crime Commissioner Fiona McCormack, who said in her submission common assault offences may not always reflect the gravity and the harm caused to victims when they are overpowered by an offender and forcibly dragged.

The law reform commission will consider the submissions and deliver a report later this year.