Police have identified a plague doctor prankster who terrified children by walking the streets of Norwich dressed as a 17th century medic as a teenager boy.

The teenager had been spotted strolling past homes in Hellesdon dressed in a long, black overcoat with a wide-brimmed hat and a pointed mask with eye openings and a beak-shaped nose.

This macabre ensemble would have been worn by physicians during the Great Plague of London between 1665 and 1666, which was the last major epidemic of bubonic plague to hit the UK.

The characteristic beak would have been stuffed with sweet smelling herbs like lavender, which were at the time believed to ward off diseases.

But spooked residents in Norfolk complained the mysterious figure was ‘disturbing’ and ‘terrifying’ for children, reminiscent of ‘bring out your dead’ criers who would have transported victims of the bubonic plague away from homes 300 years ago. 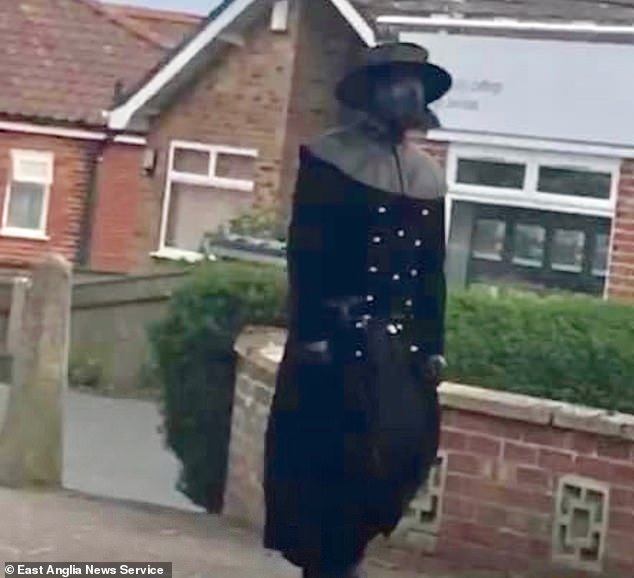 Norfolk Police have now unmasked the ghoulish figure as a local teenager who had dressed up as a 17th century plague doctor as a joke.

Officers said they have spoken to the boy about the ‘consequences of his actions’, but he will escape prosecution unless he defies police to continue his display.

A police spokesman said: ‘Officers from the local neighbourhood team have identified the individual as a boy in his late teens.

‘The individual has been spoken to about the consequences his actions may have on some people in the local community and was given words of advice as a result.’

Sightings of the teen, dressed in the black coat and beak-like mask, had prompted both alarm and amusement last month.

One person wrote on social media that the ‘plague doctor’ had ‘scared the life out of my missus’, adding that the costume must be ‘terrifying for kids.’ 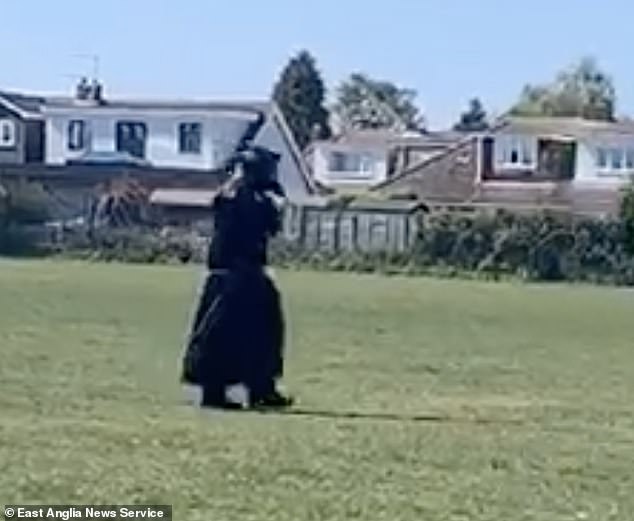 The teenager had been spotted strolling past homes in Hellesdon dressed in a long, black overcoat with a wide-brimmed hat and a pointed mask with eye openings and a beak-shaped nose 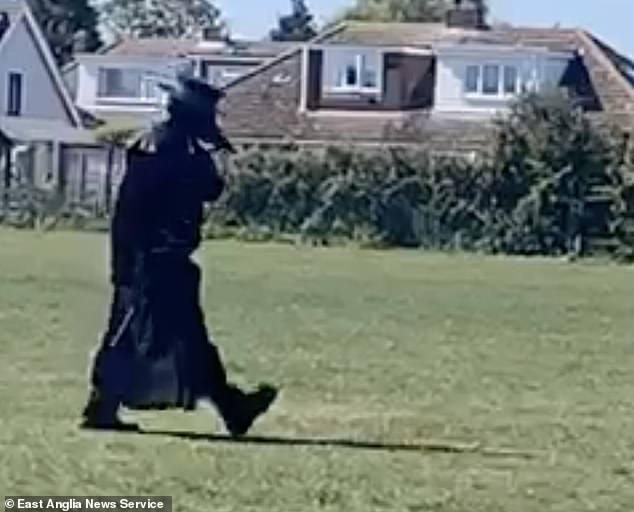 Officers said they have spoken to the boy (pictured) about the ‘consequences of his actions’, but he will escape prosecution unless he defies police to continue his display

Danny Buck, a historian at the University of East Anglia, said: ‘The police believe local residents are finding it disturbing.’

Jade Gosbell, 21, who took a photograph of the person walking across a recreation ground in Hellesdon, said: ‘It was like 20 degrees, he was wearing a full black suit, it just looked ridiculous.

‘It’s clearly for attention or something like that, because normal people just wouldn’t do that.’

The furloughed gym worker continued: ‘I was sitting there and I was getting angry myself as my mum has a phobia of masks.

‘I know that even in daylight if she was to go round the corner and bump into him she would be so scared. 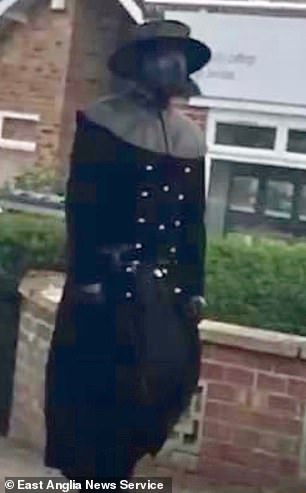 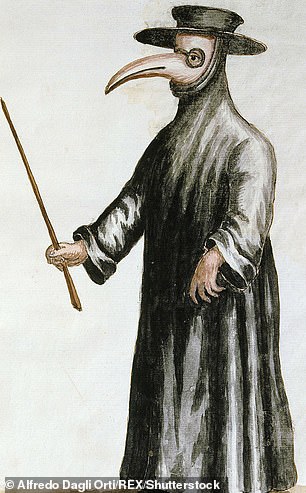 This macabre ensemble, thought to be designed by Charles de Lorme, would have been worn by physicians during the Great Plague of London between 1665 and 1666 (left: the teenager and right: an illustration of a 17th century plague physician)

After posting the photo on Facebook she added: ‘I was told that if I see him again to call the police.’

Another resident, Jenny Rogerson, 33, a mother-of-two, said: ‘We’re in lockdown and my husband was watching telly in the front room while I was in the kitchen.

‘He saw it first, and I didn’t believe him when he called out to come and have a look.

‘The kids rushed to the front window too and screamed when they saw this guy creeping down the street.

‘It frightened the life out of us. What sort of sick person does something like that?’

Norfolk Police said last week: ‘Officers have been made aware of an individual who was seen walking around the Hellesdon area wearing a plague outfit.

Plague doctors wore long, ankle-length overcoats and beak-like masks filled with herbs they believed would protect them from airborne diseases.

They also wore gloves, boots and a wide-brimmed hats as they treated bubonic plague patients in the 17th century.

Historians believe the ensemble was designed in 1619 by Charles de Lorme, who was the personal physician to several members of the French royal family between 1610 and 1650.

It is thought he came up with the idea for head-to-toe clothing for doctors caring for plague patients from a soldier’s armour.

‘Although no offences have been committed at this time, officers are keen to trace the individual in order to provide words of advice about the implications of his actions on the local community.

‘Should any further information come forward about any offences being committed, we will act accordingly.’

But some townsfolk can see no harm in it.

One tweeted: ‘Are they doing anything wrong, or just going about their business in a plague costume? Surely they are being extra-responsible by wearing a full face mask?’

Another tweeted: ‘Snitches get the plague’, and a third said: ‘Since when is the costume illegal?’

One expert says the Black Death, a bubonic plague which killed six in ten people in Europe in the 14th century, long before this costume was adopted, proved that even after a ‘Grim Reaper’ pandemic, life goes on as before.

Mr Gummer, a historian who was Tory MP for Ipswich before losing his seat in 2017, said history shows that taxpayers will pay the bill ‘for years’ for government measures to save the economy – but society will go back to how it was before.

Before he lost his seat, he chaired a COBRA meeting which looked at the government’s response to a flu pandemic.

He had also researched for a book called ‘The Scourging Angel’, about the Black Death and its effect on medieval society, before he became an MP.

There were major changes to society after the Black Death devastated Europe, he said, but during his research he came to realise that most of the changes had already started long before it hit the continent.

He added he does not believe the current pandemic will change society.

‘I think a pandemic like this might speed up some changes that would have happened anyway, but it won’t fundamentally change society of its own account,’ he said.

‘We are in strange times at the moment, but when this passes I think people will go back to life as it was before.

‘I don’t think this will fundamentally change society although it will take time to get back to normal.’

He warned there would be a price to pay for the strong action by the government to support the economy and workers.

‘I’m afraid we will be paying for this for many years. The national debt will be going up and that will have to be serviced,’ he added.

‘That means we will be having to pay more taxes and will not actually see any benefit from that.’

The plague, caused by the bacterium Yersinia pestis, was the cause of some of the world’s deadliest pandemics, including the Justinian Plague, the Black Death, and the major epidemics that swept through China in the late 1800s.

The disease continues to affect populations around the world today.

The Black Death of 1348 famously killed half of the people in London within 18 months, with bodies piled five-deep in mass graves.

When the Great Plague of 1665 hit, a fifth of people in London died, with victims shut in their homes and a red cross painted on the door with the words ‘Lord have mercy upon us’.

The pandemic spread from Europe through the 14th and 19th centuries – thought to come from fleas which fed on infected rats before biting humans and passing the bacteria to them.

But modern experts challenge the dominant view that rats caused the incurable disease.

Experts point out that rats were not that common in northern Europe, which was hit equally hard by plague as the rest of Europe, and that the plague spread faster than humans might have been exposed to their fleas.

Most people would have had their own fleas and lice, when the plague arrived in Europe in 1346, because they bathed much less often.