A prison has installed landline telephones in every cell so inmates can now call a helpline in the middle of the night if they are feeling sad or depressed.

The pioneering counselling service has been introduced in a bid to tackle suicide rates.

All 150 cells at the La Moye prison on Jersey now have a phone which prisoners can use at any time to anonymously call four fellow inmates who have been trained by the Samaritans.

Each on-shift ‘listener’ has undergone a ten-week training course. 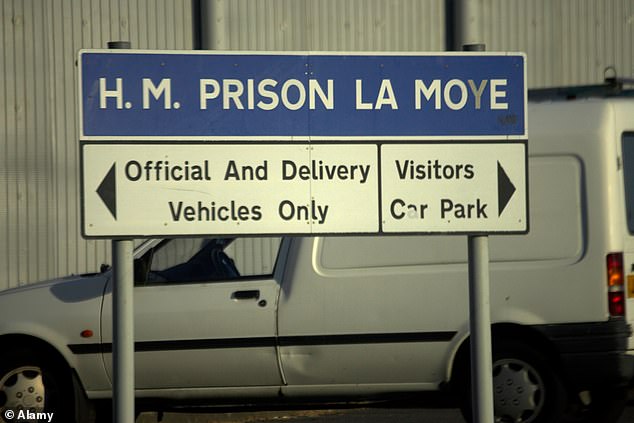 All 150 cells at the La Moye prison In Jersey now have phones, so prisoners can anonymously call four inmates who have been trained by the Samaritans

If the scheme is successful, the Samaritans are keen to see it rolled out nationally.

It is the brainchild of the jail’s governor. Nick Cameron, who said he wanted to help inmates who could be struggling in ‘the small, dark hours’ and believes that prisoners are more likely to talk to colleagues than official counsellors.

He said: ‘The dark thoughts of suicide and depression often occur in the middle of the night or the early hours of the morning.

‘It’s an important, simple initiative and means that someone who is struggling in the small, dark hours of the morning with depressive thoughts about taking their own life can talk to someone.

‘Prisoners are uniquely placed in that they can talk about the prison experience, which is something Samaritans cannot do.’

The Samaritans currently run a ‘Prisoner listener service’ – a suicide prevention scheme, staffed by prisoners – but it is limited to arranged, face-to-face meetings between vulnerable prisoners and listeners.

Mr Cameron added: ‘What we have done is put in place a scheme where listeners are not only accessible on a face to face basis but also via their in-cell phones at any time of day.

‘Most prison cells are locked at around 5pm and then don’t open again until 7am which means there are almost 12 hours when a prisoner is isolated in their cell.’

Any prisoner can apply to be a listener, but Mr Cameron said many would be excluded due to safety concerns.

Two other prisoners are currently being trained to bring the total at Jersey to six.

Mr Cameron said: ‘We obviously need to be sure about their motivations for doing it and also the Samaritans need to know they are getting people who will be able to handle the job.’

Any potential candidates will have to go through a vetting process before they are allowed to take part.

The chosen prison listeners will sign up to a rota, taking one week shifts each, so calls made during that time will come through to them.

Samaritans branch prison support officer José said: ‘If a prisoner is struggling they might not want to be seen to be contacting Samaritans, as they might worry about being perceived as weak.

‘Every call is free, not recorded and totally anonymous. There are no current plans to roll this out nationally and it will depend on each prison and prison service as to whether they have the facility to implement this.

‘However, the time will come when the scheme is an integral part of the support provided by Samaritans to all prisons.’