McFLURRY of interest! Deliveroo drivers form huge queues outside McDonald’s after fast-food chain reopened 15 branches for delivery only from today

Queues snaked around the block outside McDonald’s restaurants today as a small number reopened for the first time since early March.

The fast food giant opened its first 15 pilot sites from 11am for deliveries only – and they were swamped with UberEats and Deliveroo workers who were waiting for them to start serving.

And judging by the number of delivery drivers waiting patiently to enter the stores in London and the south-east, Britons are clearly desperate for their favourite McDonald’s meal after two months of lockdown.

Bosses have also announced the company is also to reopen its first 30 drive-through restaurants as early as next week as it pushes forward with its reopening plans, but the menu has been limited in size.

The fast food chain said it intends to begin the next phase of its reopening plans next week by opening 30 sites in the UK and Ireland for drive-through customers only on Wednesday May 20. It said it plans to reopen all of its drive-through sites by early June, in line with Government guidelines. 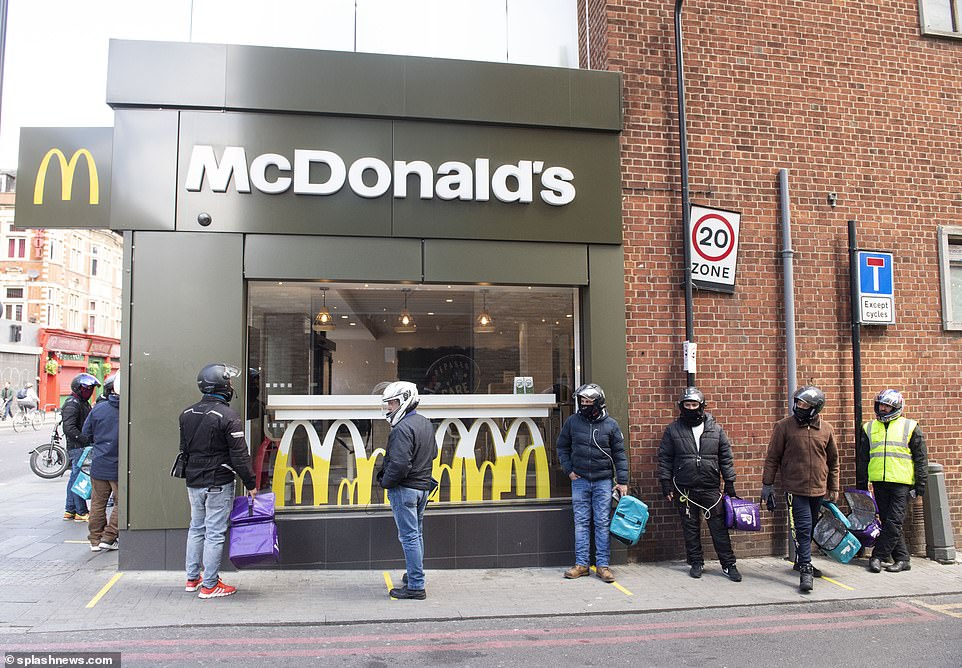 There was a queue around the block in Dalston, east London, as McDonald’s opened 15 stores for delivery services only ahead of a drive-thru reopening next week 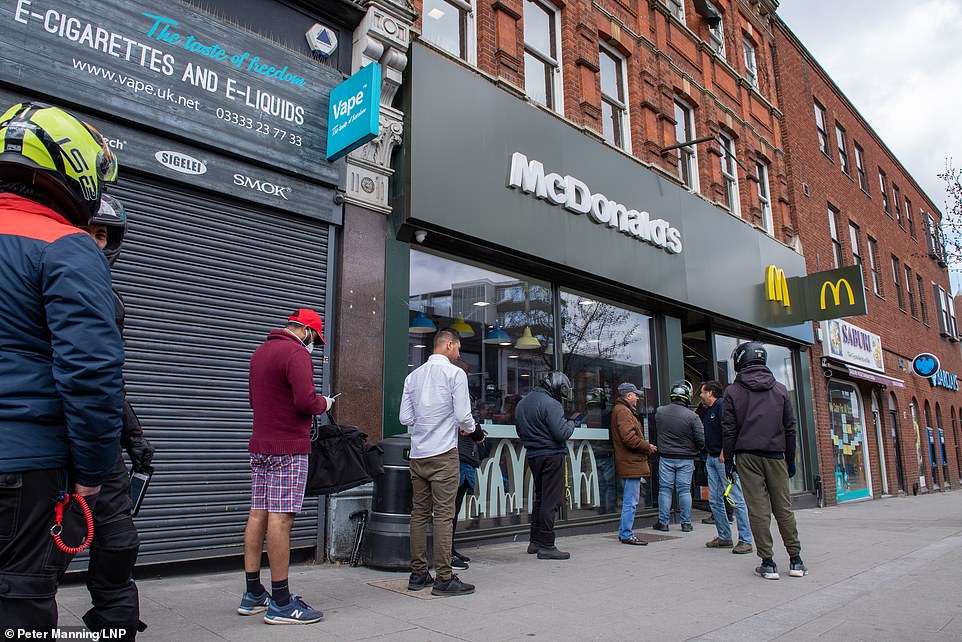 Delivery drivers wait outside the Harrow McDonald’s. McDonald’s has reopened 15 stores in the south east for delivery only service through Uber Eats – but Deliveroo staff were also there 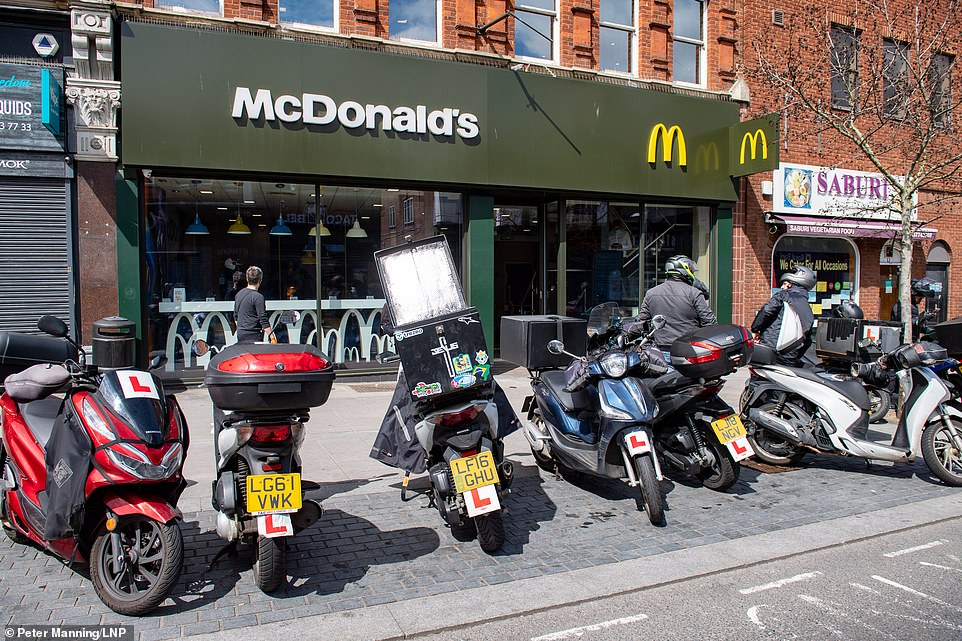 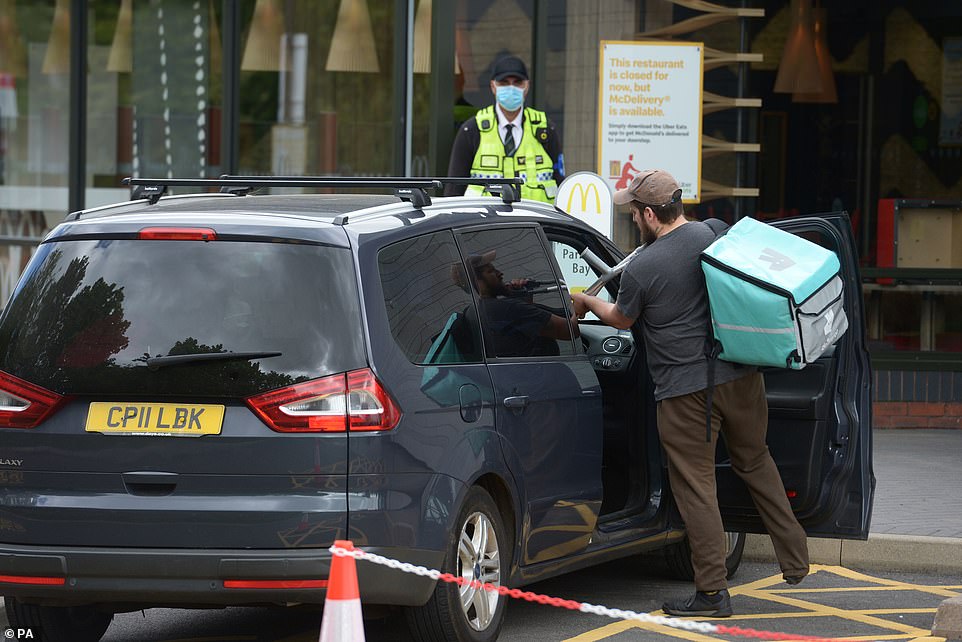 Deliveroo workers at a branch of McDonald’s in Boreham, Chelmsford, Essex, at opening time of 11am this morning, watched by a security guard in a mask 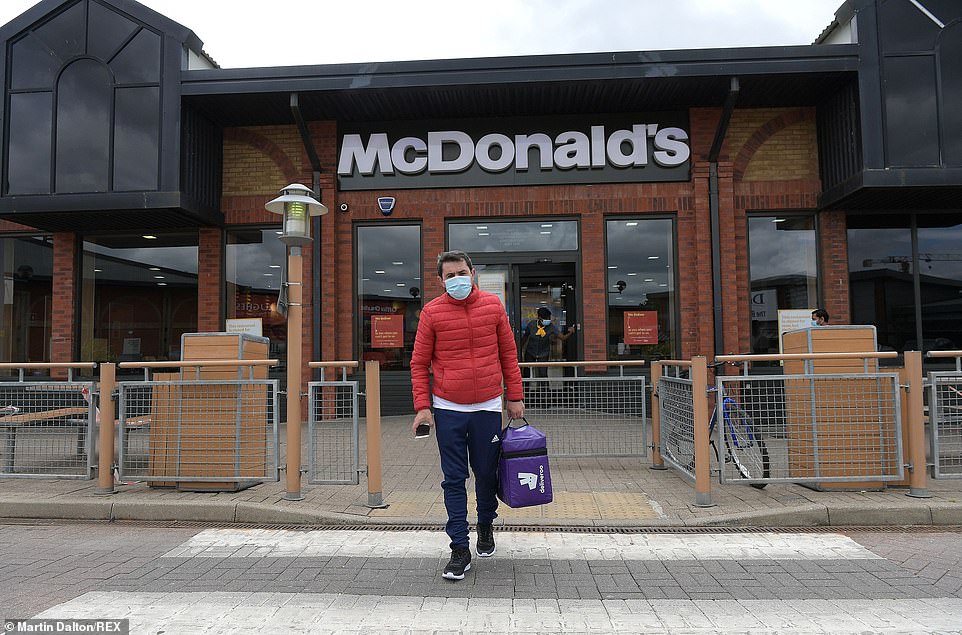 It comes as fast food rival Subway reopens more than 600 of its UK stores on Tuesday for delivery and takeaway as it serves customers for the first time since the lockdown.

What will be included in McDonalds’ limited menu? 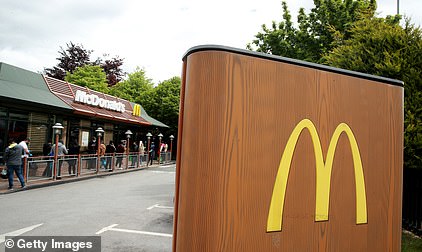 McDonald’s said it will cap the amount customers can spend to £25 per car and will ask customers to use contactless payment.

This will take place alongside safety measures the chain already announced, such as contactless thermometers for staff, Perspex screens and protective equipment.

The company called for customers to be ‘patient and supportive’ of staff as sites reopen, warning that service ‘will not be as quick as you might be used to’ as workers adjust to the changes.

Paul Pomroy, McDonald’s chief executive officer for UK and Ireland, said: ‘There has been an incredible response to news of our reopening and we know many of you are eager for us to extend our reopening plans at a faster pace.

‘The wellbeing of our employees, suppliers and delivery partners’ couriers is my top priority and we will only extend our plans at a pace that enables us to create a safe working environment for our teams.

‘As we get accustomed to the new processes and procedures, we will look to reopen more restaurants, for longer hours and reintroduce more menu items.

‘But only when I am confident we can do so whilst maintaining the new procedures we have introduced for the protection of our people.’

Meanwhile, Subway said it has reopened more than 600 stores on Tuesday in the first phase of its reopening programme.

It said the sites have reopened with new operational and social distancing safety measures to protect customers and staff.

The chain said customers will be able to have food from these sites delivered via Just Eat, Uber Eats or Deliveroo.

Colin Hughes, country director for Subway UK & Ireland, said: ‘Everybody in our Subway family and the wider communities they serve, has shown great resilience in adapting to these challenging times that we currently find ourselves in.

‘We are extremely grateful for their ongoing support in anticipation of this next phase of our gradual reopening, which will enable us to continue to serve our communities and frontline workers, who have helped us all so much in recent weeks.

‘The weeks and months ahead will continue to be challenging for everyone and Subway will play its part in supporting the new normal whatever that may look and feel like.’ 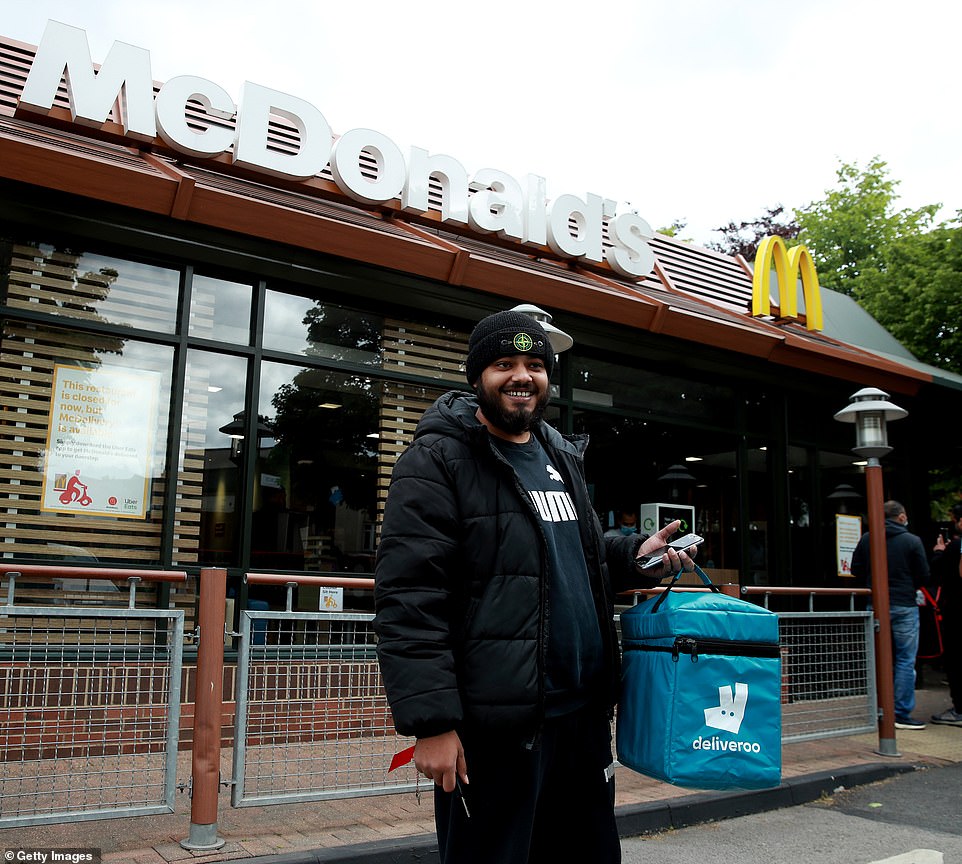 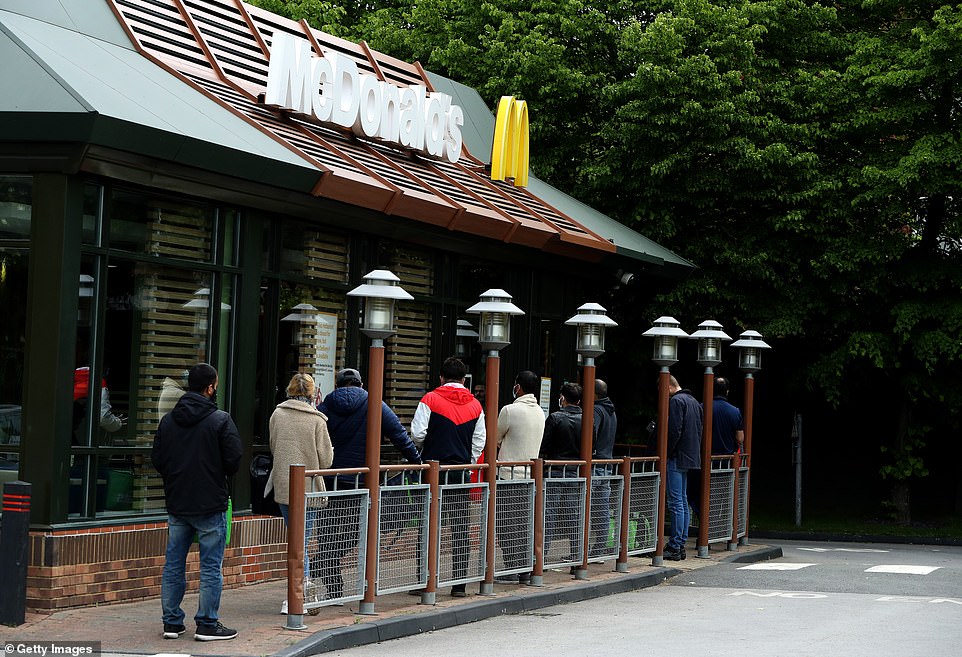 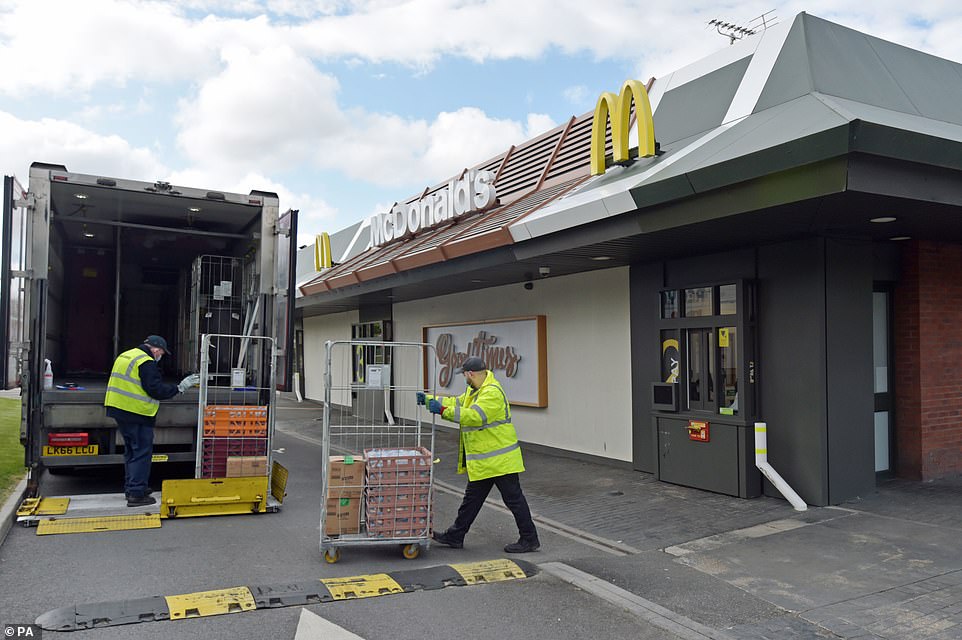 Deliveries of food and drink arrived at stores this morning, pictured in Chelmsford – but the menu has been limited for the time being

Which other food and drink chains are already reopening in the UK?

Home Delivery will also be restored at the 24 locations with the company’s partners Just Eat and Deliveroo.

The new ordering system will allow customers to order their food and pay for it online then collect it from outside their nearest TGI Fridays restaurant, where social distancing measures will be in place.

The menu will consist of 22 of the restaurant’s favourite dishes, covering appetisers, mains, desserts and kids’ options.

Five Guys kept 13 restaurants open for delivery and click and collect orders at the outset.

It then reopened 16 stores at the end of April for business and a further 16 will reopen on May 5 bringing the total to 45 out of 104 restaurants that will be open.

Some Costa Coffee branches have been open inside hospitals to serve NHS staff through the lockdown.

But the decision to run a total 33 stores across Britain indicates that Costa Coffee is one of many chains seeking to kick-start trading.

On May 4, photos showed motorists queuing for hours to get a drink at a Costa drive-thru in Edinburgh, sparking fears people are ignoring lockdown measures as more high street chains reopen. 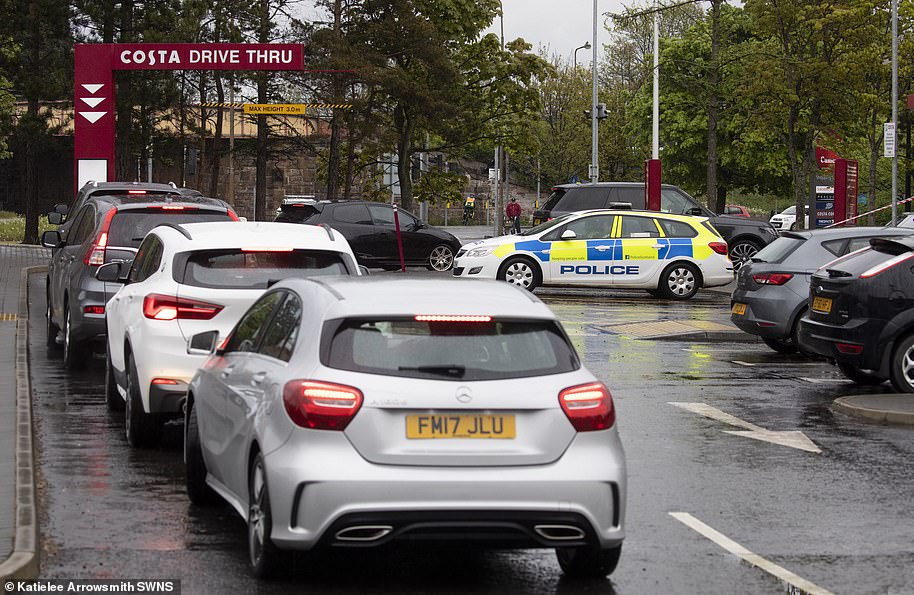 Drivers were seen queuing for a coffee at Costa Drive Thru, Cameron Toll, Edinburgh on the morning of May 4

Popular chicken chain Nandos shut its door on March 23 due to the pandemic.

Nandos has now opened six restaurants with four in London and two in Manchester – for delivery only.

Burger King today announced on April 28 that they were opening the first drive-thrus for customers to use again. The restaurants are open in Havant, Hampshire, Dundee, Aberdeen, Reading, Hillington (Norfolk), Southampton, Merto, (London) Springfield Quay (London).

Drivers were photographed in a line around the block in Havant when the drive-thru first opened and staff were seen wearing masks and gloves over their uniforms as they handed burgers and fries to customers in Hampshire.

The popular restaurant offering Japanese and Asian food reopened its kitchens to deliver food to customers’ homes from last Thursday in Peckham and Hackney.

Fast food giant KFC announced on April 29 the reopening of another 80 branches for delivery as Britain continues to edge out of lockdown.

The fried chicken chain said 100 of its stores up and down the country would be able to bring orders to customers’ homes from May 4.

On Tuesday KFC announced it was reopening dozens more drive-thru services. From today it will run the drive-thru lanes at 55 restaurants, that are already open for delivery.

A spokesman said: ‘We’ve been working hard to responsibly reopen our restaurants and now we’re spreading our wings a little further.’

It reopened 71 more cafes for takeaway and delivery on Monday May 11 after a successful trial. 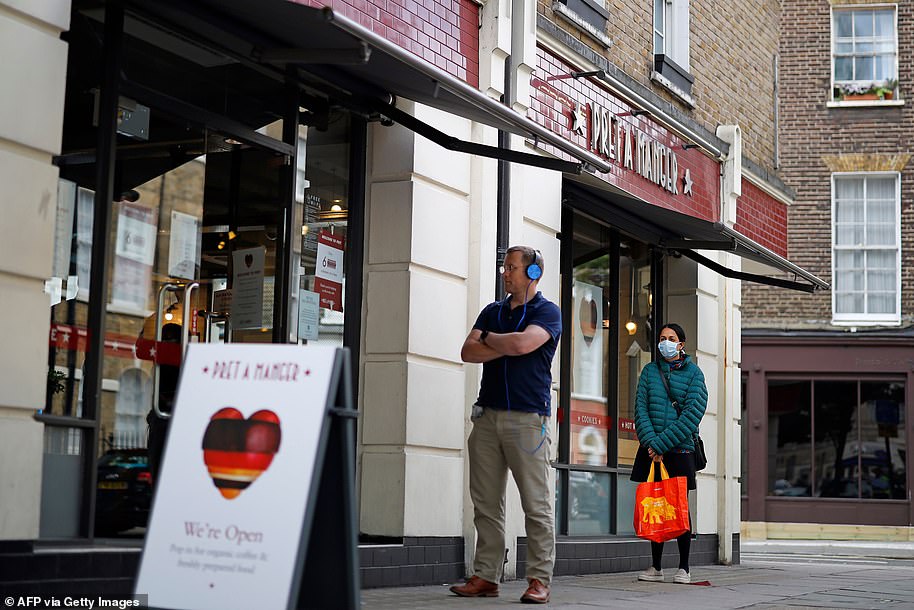 Customers adhere to social distancing as they queue to enter a recently re-opened Pret-A-Manger shop in London. The sandwich chain announced they are opening a further 71 outlets from Monday May 11

It will bring the total number of reopened shops to more than 100.

Each shop will be fitted with Perspex screens at the tills, while restrictions will be in place on the number of customers allowed in the stores.

It has opened stores in Newcastle as part of its trial period, including one of the shops reopened at Kingston Park shopping centre.

Greggs previously halted plans to reopen 20 of its stores after fears of overcrowding.

Only a small number of stores have currently reopened as part of their gradual reopening process.

Restaurants preparing to offer a delivery-only service from 11am on May 13 are mainly in London and the surrounding counties – with three in Luton and another three in Chelmsford.