Rampaging CAMEL attacks and kills two men, aged 42 and 67, at Tennessee petting zoo: Animal was put down ‘for the safety of everyone on the scene

The Obion County Sheriff’s Office announced on Friday that it received reports of a camel on a loose that was attacking people at Shirley Farms Thursday afternoon.

In audio obtained by CBS News, a dispatcher could be heard reporting ‘two 911 calls of people being viciously attacked by a camel.’

The camel was later put down ‘for the safety of everyone on the scene,’ and Bobby Matheny, 42, and Tommy Gunn, 67, were pronounced dead. 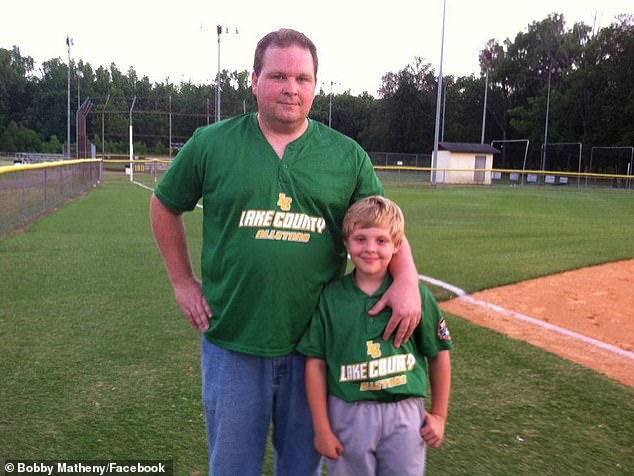 Bobby Matheny, 42, was one of two victims killed when the camel attacked on Thursday 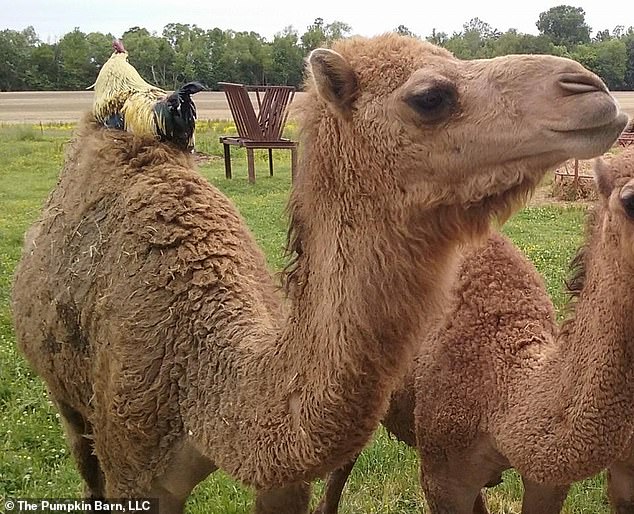 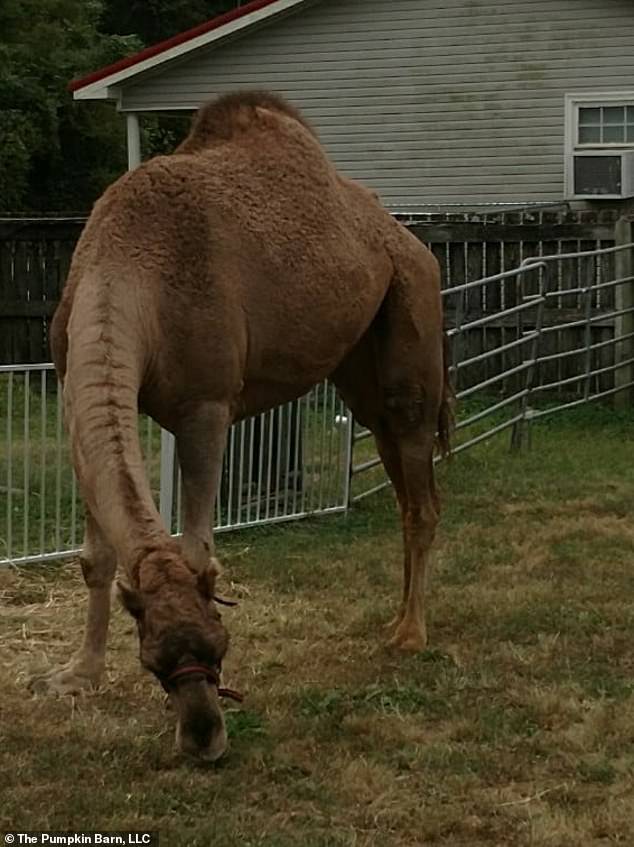 Officials from multiple agencies responded to the scene of Shirley Farms, on the site of The Pumpkin Barn, LLC, shortly before 5pm

The Obion County Sheriff’s Office said they first received received a call about a loose camel at Shirley Farms, on the site of The Pumpkin Barn, LLC, at around 4.44pm.

Officials from multiple agencies responded to the incident, and deputies who arrived on the scene immediately found two unconscious victims, as the camel remained on the loose, Sheriff Karl Jackson said on Friday.

Officers on the scene immediately tried to provide aid to the victims and move them to a safe place, he said, as the camel attacked an Obion County Sheriff’s Office vehicle.

It then moved towards the deputies, who were transferring a victim to EMS, at which point, Jackson said, ‘officers had to put the camel down for the safety of everyone on [the] scene.’

In the aftermath, Matheny and Gunn succumbed to their injuries, and were pronounced dead on the scene.

Nick Beres, a reporter for News Channel 5 Nashville, later reported that he spoke to a family member of one of the victims, who said they were trying to help capture the animal when it cornered them and attacked, stomping them to the ground.

As a camel expert explained to Beres: ‘A full grown [camel] can fit your head, arm, leg or torso in its mouth.

‘They have enough strength to rush arms and legs along with your neck, while kicking forwards and backwards.

‘Camels will do a combination of all those things while kneeling forward to crush you,’ the camel expert said. 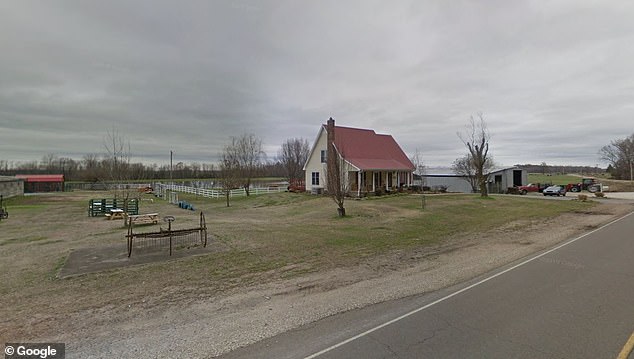 The petting zoo has previously been cited by the USDA for animal abuse and safety concerns.

In 2018, a report obtained by DailyMail.com said an inspector on the scene noticed ‘that the public were petting and feeding animals without any employee/attendant present.

‘There is a barrier present between the public and the non-human primates, but not for an y of the other species present, including a zebra, camels, llamas, alpacas, goats, sheep, pigs, fallow deer, kangaroo, zebu, rabbits, cavy and prairie dogs.

‘The only attendant noted present at the exhibit was the cashier who does not have a direct line of sight on any of the animals,’ it said.

‘To prevent injury to the pubic and the animals, and to ensure proper human-animal interactions/feedings, an attendant must be present.’

Then in 2019, the USDA reported that the only source of water for the camels and zebras ‘was a very small shallow muddy creek running through their enclosure.

‘Access to potable water is necessary to prevent dehydration and spread of disease/parasites,’ the inspection report reads.

‘The camels and zebras shall be provided potable water at all times, or as often as necessary for the health and comfort of the animals.’

In a statement to DailyMail.com, PETA Foundation Associate Director of Captive Animal Law Enforcement Debbie Metzler said: ‘Shirley Farms has a history of failing to have employees supervise interactions with camels, among many other citations for violating federal law, so this incident is tragic yet unsurprising.

‘Injuries abound when animals are exploited for entertainment, and PETA urges everyone to avoid sleazy roadside attractions as if lives depended on it—because they do.’ 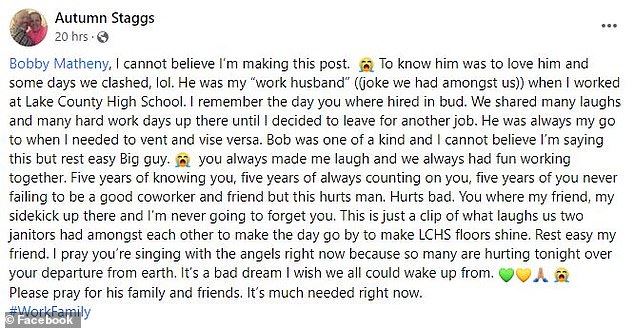 Following the news of Matheny’s death, tributes started pouring in on Facebook, with Autumn Staggs, a former co-worker of Matheny writing: ‘I cannot believe I’m making this post’

Following the news of Matheny’s death, tributes started pouring in on Facebook, with Autumn Staggs, a former co-worker of Matheny writing: ‘I cannot believe I’m making this post.

‘To know him was to love him, and some days we clashed,’ she wrote of Matheny, calling him her ‘work husband’ when they both worked as janitors at Lake County High School.

‘I remember the day you were hired,’ Staggs reminisced. ‘We shared many laughs and many hard work days up there until I decided to leave for another job.

‘He was always my go-to when I needed to vent and vice versa,’ she explained.

‘Bob was a one-of-a-kind, and I cannot believe I’m saying this but rest easy big guy.

‘You always made me laugh and we always had fun working together.

‘You were my friend, my sidekick up there and I’m never going to forget you. Rest easy my friend.

‘I pray you’re singing with the angels right now, because so many are hurting tonight over your departure from Earth. It’s a bad dream I wish we all could wake up from.’

A funeral service for Matheny will be held on March 13 in the gymnasium of Lake County High School, according to an online obituary for him, with staff members serving as honorary pallbearers.

Shirley Farms told CBS News that they are ‘upset and grieving,’ but do not have any further comment at this time.