An unregistered school in Melbourne’s east that caters for young people who struggle to fit in with mainstream education and charges almost $30,000 a year is being investigated by the state’s education regulator.

Riverside Grammar School in Hawthorn opened last year under the leadership of Jon Carnegie, who used to work at Trinity Grammar School. A previous school he ran – that carried his surname – had its registration cancelled in 2012 for failing to comply with minimum standards. 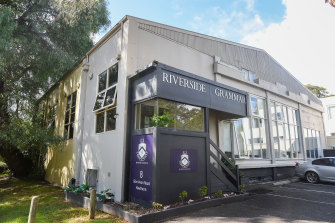 The new venture, Riverside Grammar, is described on its website as an independent, co-educational high school for students “seeking a personalised learning experience”. It is pitched at “young, often marginalised youth, looking for an alternative to the mainstream education system”.

The school is run out of a nondescript two-storey building next to the Yarra River. On the front entrance are several large dark blue signs emblazoned with the school name and crest and a Latin motto, Cognita vita reali, which translates as “real life learning”.

The organisation caters for a very small cohort of students aged between 13 and 19, and provides a year 13. Dr Carnegie declined to answer questions about how many students attend. A 2021 prospectus shows that the Hawthorn day school costs $7480 per term, while a “live-in retreat” in the Otways costs $14,960 per term.

The school does not say it offers the Victorian Certificate of Education (VCE), but says all Riverside Grammar students aspire to and work towards a “VCE outcome or equivalent” and that the school has an ATAR VCE average score of 76, placing it in the top 24 per cent of students in Victoria. It is unclear where these figures are drawn from. 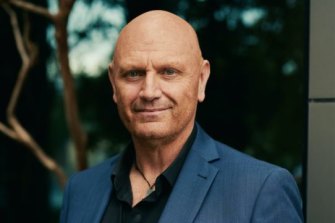 According to the fine print on its website, the school is not under the authority of either the state or federal education departments. Students either remain enrolled at their school of origin while attending Riverside Grammar, or enrol in a different Department of Education institution such as Virtual Education Victoria, “which will then become their school of origin for the purposes of statewide academic assessment and regulation”.

Virtual Education Victoria declined to comment on the relationships between the schools.

Riverside also says it offers “animal therapy” at its Otways retreat, an annual desert camp program and a survival camp on Stradbroke Island.

In a statement, the Department of Education said Riverside Grammar School is not a registered school and is not registered to provide senior secondary courses such as VCAL or VCE.

The Victorian Registration and Qualifications Authority is currently investigating whether the entity is compliant with the Education and Training Reform Act 2006, a spokesman said.

All Victorian schools must be registered with the VRQA and are required to meet minimum standards for governance, financial management, curriculum, teaching practice and providing a safe environment for children. The VRQA reviews independent schools, generally every five years.

Unlike ‘university’, the word ‘school’ is not a prohibited term. However, it is an offence under the Education and Training Reform Act to “carry on or conduct a school” unless it is registered. Breaches can result in fines.

When contacted, Dr Carnegie said: “Riverside Grammar has not been informed by either DET or VRQA of any formal investigation and therefore cannot comment.”

The VRQA said it had been in contact with Dr Carnegie this week.

Dr Carnegie previously worked at Trinity Grammar School in Kew, where he received media attention and a teaching award for helping students in his class write a letter to Nelson Mandela, who later visited Australia on their invitation.

The 56-year-old describes himself on his website as an “educator, writer, and advocate for educational and social reform”.

In a newsletter published several years ago, Dr Carnegie said that the Carnegie School would become known as Riverside Grammar School from January last year.

“The name change represents a transition into a new era, where we take the best of the old school and merge it into a more professional sustainable independent model,” he said. 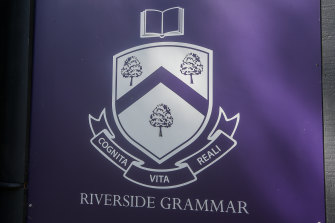 Riverside Grammar is listed as a “charity program” under The Carnegie School Inc, a charity registered with the Australian Charities and Not-for-profits Commission.

Paul O’Halloran, a workplace relations lawyer who assists schools in addressing alleged non-compliance among school staff, said he would be concerned about any institution operating outside mainstream regulation.

“Non-compliance with minimum standards occurs in even the most highly regulated and compliant schools,” he said.

“I would be concerned that an organisation that was essentially off the grid could hypothetically escape all external scrutiny.

“No school should be immune from external scrutiny.”

Dr Carnegie, a registered teacher with the Victorian Institute of Teaching, founded the Carnegie School in 2006, which aimed to provide an “alternative model of education” for students who fall through the cracks of mainstream education.

The school’s registration was first suspended between December 2009 and mid-2010 for failing to meet minimum standards such as not having on-site toilets.

The state’s education regulator announced in June 2012 it planned to close the school for “significant” breaches, including failing to respond to a parent’s complaint and employing a teacher before she had been registered. The school’s registration was cancelled in September that year.

In 2013, Dr Carnegie fought the decision by lodging an application in the Victorian Civil and Administrative Tribunal. He argued that by cancelling the registration, the regulator had discriminated against him because of his personal association with people who have a disability.

At the hearing, he accepted that the school had not been compliant with the standards.

“He said that he accepted there had been failings, and did not fight the fact that the school had been closed. Dr Carnegie expressed his strong view that it had been discriminatory to close the school without consulting the children and their families,” according to a decision published by the tribunal.

“Dr Carnegie … described himself as fighting on behalf of them, and of all abused children.”

The regulator said the decision to cancel the school’s registration was made because the school did not comply with the minimum standards.

It was ruled that there was no prospect of Dr Carnegie succeeding and the claim was dismissed in early 2013.

Dr Carnegie has won several teaching prizes, and has previously worked as a journalist.

A spokesman from Independent Schools Victoria said the organisation that describes itself as Riverside Grammar School was not a member of its peak body.

“Membership of ISV is restricted to bona fide independent schools that meet the standards required for registration by the VRQA, Victoria’s education and training regulator,” the spokesman said.