‘It was very, very self-centred’: Royal expert claims Meghan Markle’s keynote summit speech ‘felt a bit flat’ and was ‘too much of a reference to her own personal experiences’

Meghan Markle’s keynote speech at the One Young World summit ‘felt a bit flat because it was very, very self-centred’, a royal expert claimed today.

The Duchess of Sussex last night delivered her first in-person address in Britain since quitting as a working royal amid the Megxit crisis more than two years ago.

But Daily Mirror royal editor Russell Myers said the speech in Manchester, which was billed in advance as being about gender equality, was a ‘missed opportunity’.

He told ITV’s Lorraine that the talk to 2,000 delegates at the opening ceremony ‘was a bit too much more of a reference about her own personal experiences’.

The programme’s presenter Lorraine Kelly also pointed out that she ‘didn’t hear much about gender equality, which is what the conference is all about’. 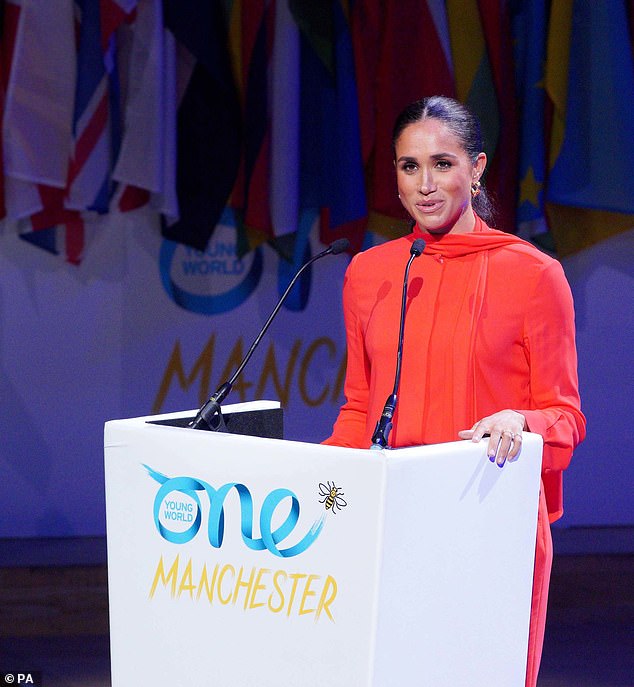 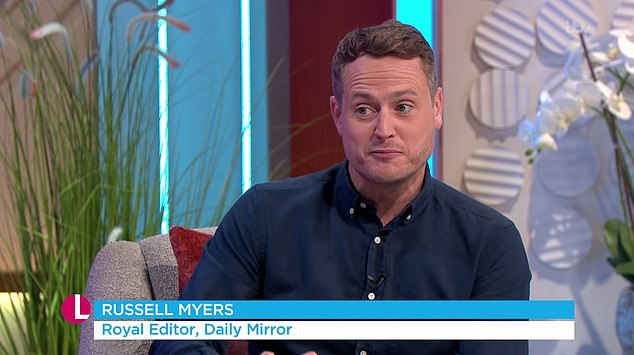 The former Suits star, who was dressed in a vivid red high-necked sleek trouser suit, smiled and held hands with the Duke of Sussex as they made their way through the auditorium to huge cheers, as delegates held up their phones to film them.

Former actress Meghan told attendees said how her life had changed when she last joined the summit in London in 2019 – singling out her role as a wife and a mother – but making no mention of becoming a senior royal the year before.

What’s next for Harry and Meghan on their mini European tour?

The Duke and Duchess of Sussex are to appear in Germany for an Invictus Games event today, fresh from Meghan’s first in-person address in Britain since quitting as a working royal.

Harry and his wife are expected to meet officials and potential competitors in Dusseldorf to mark the one-year countdown to the 2023 games in the city.

The duke founded The Invictus Games to aid the rehabilitation of injured and sick military personnel and veterans across the globe, by giving them the challenge of competing in sporting events similar to the Paralympics.

The Dusseldorf games will take place in September 2023, with more than 500 competitors from 21 nations across 10 sports.

This year’s games took place in The Hague in April, and during that event a camera crew filming for a Netflix documentary called Heart Of Invictus – a series from Harry and Meghan’s Archewell Productions following people competing at the event – was seen close to the couple.

They are expected to attend a reception in Dusseldorf in the early afternoon, before Harry delivers remarks at an Invictus press conference later in the day.

Brigadier General Alfred Marstaller, chief executive of the Invictus Games Dusseldorf, said those involved were ‘honoured’ to welcome the couple for the event.

They are due to return to the UK for the WellChild Awards in London, where Harry will deliver a speech on Thursday.

Reflecting on the speech, Mr Myers said: ‘The content of the speech, everyone was really interested in – and what did Meghan have to say? This was her big moment, the first time she was speaking in public since leaving the Royal Family.

‘And unfortunately it has felt a bit flat because it was very, very self-centred – for want of a better phrase.’

He said ‘somebody actually counted the amount of times that she mentioned herself, and it was an astonishing 54 times in a seven-minute speech’.

Mr Myers continued: ‘It did seem like it went on for quite a long time, but I do think we have to take some positives out of it.

‘She said that it was very, very nice to be back in the UK, she spoke about her time as a mother, how her life had obviously changed from the time that she was an actress.

‘Spoke a bit about self-imposter syndrome, and about how when she was invited to be part of this organisation, she was sitting at the table with world leaders and how she felt that she wasn’t worthy, and yet here she is.’

After watching a clip from the speech, host Lorraine said: ‘Do you know what, she’s really good at giving a speech. There were two speeches that were made yesterday – Meghan and Liz Truss – and I have to say Meghan knocked it out the park.

‘And she really does. She knows how to communicate – of course she does, she’s been trained., she’s a trained actress and all of that, we know that. She does have great communication skills.

‘But I didn’t hear much about gender equality, which is what the conference is all about.’

But Meghan delivered the final address of the ceremony, declaring the summit open.

Mr Myers said: ‘It’s all about the vision of the future, and it’s quite interesting that Sir Bob Geldof was speaking just before her and of course his speech was super-impassioned, railing against world leaders, saying to the young people – there’s 2,000 young people there from 190 counties – you can be the change.

‘And I think we sort of lacked that from Meghan. She is a fantastic orator, I’ve always said it – whenever you are in her presence, as I have been many, many times, you are in awe of her, because she really holds the room, she really captivates it. 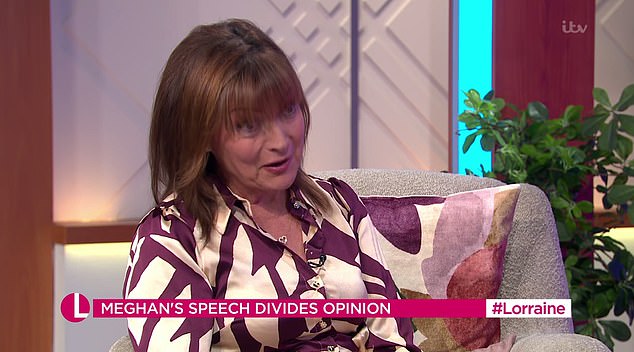 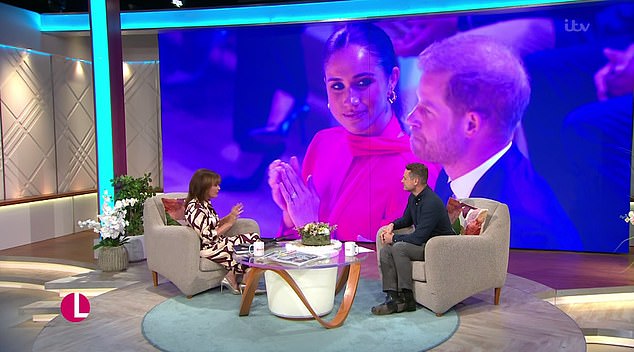 ‘And I just felt it was a little bit of a missed opportunity. It was a bit too much more of a reference about her own personal experiences, but we’ve come to expect that from Meghan I think.’

In Manchester’s Bridgewater Hall yesterday evening, Meghan said in her speech: ‘I joined you in London in 2019. And by that point, it’s fair to say, my life had changed rather significantly. I was now married, and I was now a mom,’ she said, leaving a pause at the end which was filled with huge cheers from the audience.

‘My world view had expanded exponentially, seeing the global community through the eyes of my child,’ she added, speaking about her son Archie.

The trip comes just days after Meghan’s controversial interview with The Cut magazine, in which she said it takes ‘a lot of effort’ to forgive when asked if there was room for forgiveness between her, the royals and her own family, and hinted that she can ‘say anything’.

She said in the interview that ‘just by existing’ she and Harry were ‘upsetting the dynamic of the hierarchy’ before they stepped down as senior working royals in 2020.

Last night, Megan spoke about the first time she was asked to be a counsellor for One Young World in 2014 and having a ‘pinch me moment’.

‘And there I was, the girl from Suits. I was surrounded by world leaders, humanitarians, prime ministers and activists that I had such a deep and long-standing respect and admiration for. And I was allowed in, to pull up a seat at the table.

‘I was so overwhelmed by this experience, I think, I think I even saved my little paper place-marker with my name on it. 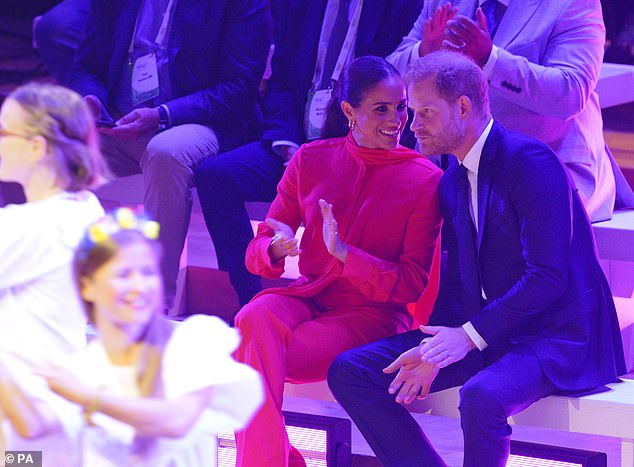 She added that she had doubted herself despite what she saw as her ‘important and meaningful’ work, but said One Young World had seen in her ‘the present and the future’.

‘I was so nervous, I doubted myself and I wondered, wondered if I was good enough to even be there?

‘What I was doing in the world, albeit important and meaningful as far as I saw it, was it deserving to have a seat at this table?

‘But One Young World saw in me what I wanted to see fully in myself. They saw in me, just as I see in you, the present and the future.’

The duchess told the delegates: ‘You are the future, but I would like to add to that you are also the present. You are the ones driving the positive and necessary change needed across the globe, now, in this very moment.’

It was the Sussexes first appearance in the UK since the Platinum Jubilee in June, when they appeared briefly at the service of thanksgiving and were not included in the line-up of working royals on the Palace balcony.

During the proceedings yesterday, the couple sat in the front row on stage, side by side on a bench, as they joined One Young World counsellors to watch the flag bearers enthusiastically parading the flags of more than 200 countries.

Meghan, with her hair in a ponytail, swayed in time to the music, which included Dancing In The Streets and Respect, as she clapped her hands.

Harry leaned over to whisper in his smiling wife’s ear a number of times.

To cheers, Meghan said in her speech: ‘I’m thrilled that my husband is able to join me here this time.’

She added: ‘My husband has long advocated for important and necessary impact in the world, focusing a huge part of his life’s work on the youth.

‘For both of us, bearing witness to the power that you hold in your hands and the unbridled enthusiasm and energy that you have to see things come to fruition, it is just an absolute privilege.’ 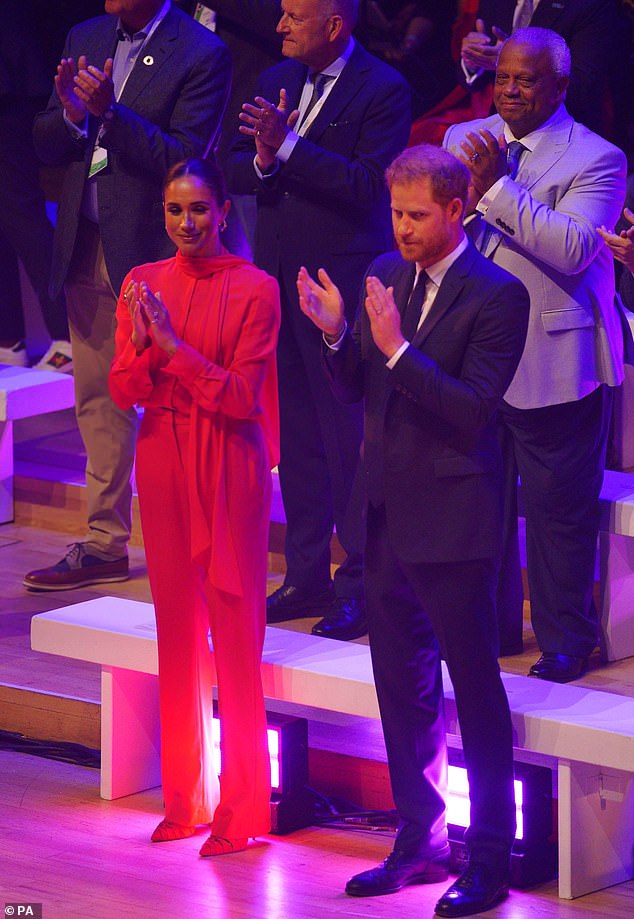 The couple travelled by train from London to Manchester, and flew commercial from the US to the UK.

The Sussexes are said to have hired one of Harry’s ex-Metropolitan Police protection officers, who is said to now work in the private sector, as part of their security team for the whirlwind working trip.

Harry and Meghan are staying at their Frogmore Cottage home on the Windsor estate, but are not expected to meet with the Cambridges, who have moved to Adelaide Cottage, less than a 10-minute walk away.

Next stop for the Sussexes will be Germany, for the Invictus Games Dusseldorf 2023 One Year To Go event, which is taking place today, before they return to the UK for the WellChild Awards in London, where Harry will deliver a speech on Thursday.

David Jones, co-founder of One Young World, told delegates that Meghan was an ‘incredibly powerful voice for gender equality’.