Russia will mark the 75th anniversary of the Soviet victory in World War II with a military parade later this month having cancelled its initial May 9 demonstration due to the coronavirus.

Asymptomatic Russian troops and those who have developed an immunity to the disease will march in the parade, Russia’s Defense Minister Sergei Shoigu said on Tuesday.

Last week, President Vladimir Putin ordered the military to hold the rescheduled parade on June 24, while declaring that Russia’s coronavirus outbreak had stabilised despite posting its record death toll from the virus on the same day at the time.

Shoigu went into more detail today, and said that 14,000 troops will march across Red Square in Moscow, while 50,000 more will march through 27 other cities that house military units, according to The Moscow Times.

A report in May estimated that around 400 Russian troops had been infected with Covid-19 participating in rehearsals for the May 9 parade. 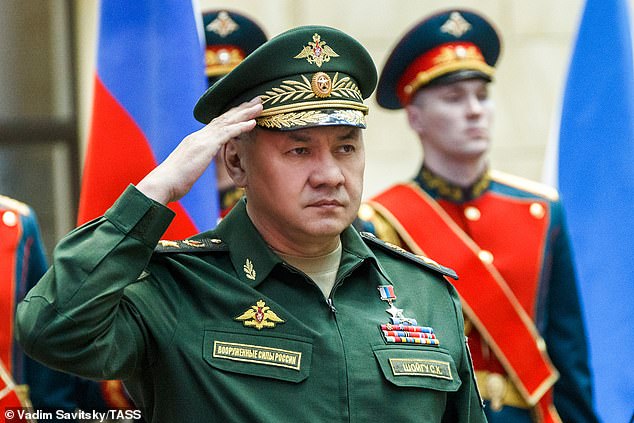 Russia’s Defense Minister Sergei Shoigu, pictured on May 29, 2020 at a military awards ceremony, announced on Tuesday that 14,000 troops will march through Moscow in a postponed parade to mark the 75th anniversary of the soviet victory in World War II. A further 50,000 troops will march in 27 other cities around the country

‘Mostly military personnel with immunity to Covid-19 and without signs of infectious diseases will be allowed in the parade,’ Shoigu said at a meeting of the Defense Ministry board. ‘I demand that contacts are eliminated between the parade crews and troops and civilians not involved in rehearsals.’

In his statement, Shoigu said the number of coronavirus cases and recoveries among the military had started to trend in the right direction.

‘Since the beginning of March, six and a half thousand people have been infected in the Armed Forces, more than four thousand three hundred of them have already been discharged.’

In a separate newsletter from the Ministry of Defense, a reported 1,500 troops are currently being treated for Covid-19, or are self isolating, as of Monday.

The public statement from the Ministry announcing the rescheduled parade said that people from 19 foreign countries are also invited to join, and also announced that the country will be taking the opportunity to display new military equipment.

’25 units of weapons, military and special equipment, 75 aircraft will be presented. Viewers will see over 20 new models of military equipment, including Su-57 and MiG-31K aircraft,’ the statement read.

Shoigu said that ‘special anti-epidemic measures’ will be taken on the day to protect military personnel from further risk of infection, and that each location will have ’round-the-clock medical centres’ available.

Due to the coronavirus, on April 16 Putin postponed the parade that was set to take place on May 9, which would have marked 75 years to the day that the Soviet Union achieved victory over Nazi Germany in 1945.

Instead, Russia held subdued celebrations, which saw Putin lay roses at the Eternal Flame war memorial, fighter jets fly over Moscow and fireworks set off all over the country.

Putin gave a solemn speech at the war memorial outside the Kremlin walls and made no mention of the coronavirus, focusing squarely on the sacrifices of the Soviet era.

‘Our veterans fought for life, against death. And we will always be equal to their unity and endurance,’ Putin said, adding: ‘We know and firmly believe that we are invincible when we stand together.’

Russia and ex-Soviet countries hold their victory celebrations a day after the UK and many other countries, who host theirs on May 8. This is due to the fact that all combat actions ceased on May 8 at 23:01 Central European Time, which was already May 9 in the USSR. 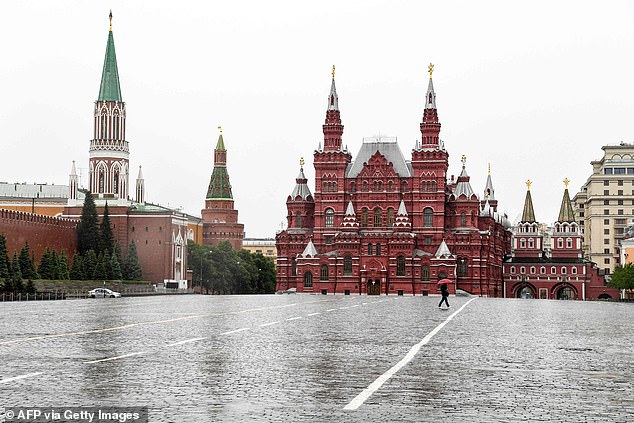 Meanwhile, Putin yesterday announced that a nationwide vote on reforms that could allow him to stay in power until 2036 will be held on July 1 after coronavirus delayed the initial April 22 referendum.

Putin told a government meeting today that the situation had broadly stabilised and the vote could go ahead on 1 July.

The number of coronavirus infections in Moscow has dropped sharply, he said, allowing the capital to start easing some restrictions.

Putin is currently required by the constitution to step down in 2024 when his second sequential and fourth presidential term ends.

‘I really hope the country’s citizens will take part actively in the vote on the amendments to the constitution,’ Putin told a televised government video call from the Novo-Ogaryovo in Moscow.

Critics have dismissed the vote as a constitutional coup which they fear will be rigged and urged voters to stay away or to reject the proposed changes. Others have accused him of failing to support businesses and ordinary Russians battered by the coronavirus.

His approval rating fell to a historic low of 59 per cent in an April poll.

According to the Jonhs Hopkins University, Russia is the country with the third highest number of reported coronavirus cases, after the U.S. and Brazil, seeing 423,186. It has reported a relatively low 5,031 deaths related to the virus.