Washington: First he ordered the detention of at least four senior members of his own royal family. Two days later he plunged Saudi Arabia into a price war with Russia that sent energy and stock markets around the world into free fall.

For a while, Crown Prince Mohammed bin Salman of Saudi Arabia had appeared to be living down his reputation for dangerous aggression.

Perhaps chastened by the blowback over his connection with the killing of dissident journalist Jamal Khashoggi, the 34-year-old prince had kept a low profile for more than a year. 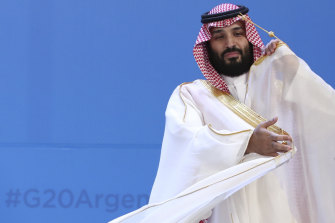 Saudi Arabia’s Crown Prince Mohammed bin Salman at the G20 in Argentina where he was seemingly treated the same as other world leaders.Credit:AP

Now his new power plays are reviving debates in Western capitals about whether he is too rash to trust as a partner. His sudden, steep cut to the price of oil has rocked a global economy already at risk of falling into recession, threatened to burn through Saudi Arabia's cash reserves and undermined his grandiose promises of new investments to lessen the kingdom's dependence on oil.

"It is mutually assured destruction for any oil exporting economy, certainly including Saudi Arabia and Russia and probably the United States as well," said Greg Brew, a scholar of the region and a fellow at Southern Methodist University.

"But this is typical MBS, right?" he added, referring to the crown prince by his initials. "He is a risk taker, and he is prone to impulsive decisions."

The detention of the senior royals, which began to leak out on Friday, has not been acknowledged or explained by the Saudi officials. 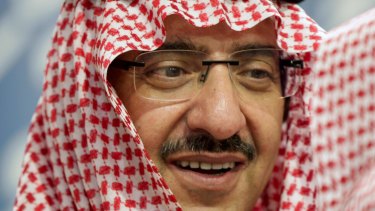 Two of the detained princes — Prince Ahmed bin Abdulaziz, the younger brother of the crown prince’s ageing father, King Salman, and Prince Mohammed bin Nayef, the former crown prince and interior minister — had once been seen as possible rivals for power. Their arrests stirred anxious speculation among cowed members of the royal family that Crown Prince Mohammed might be sidelining opponents in preparation for taking the throne from his father, who is 84 and has sometimes appeared forgetful or disoriented.

People close to the royal court, though, insisted Mohammed had merely lashed out at his uncle and cousins for speaking critically about him. He wanted to teach the rest of the family a lesson.

"It was quiet for a while and people were wondering if MBS had mellowed," Steffen Hertog, a scholar at the London School of Economics, said. "But clearly his character is pretty persistent." 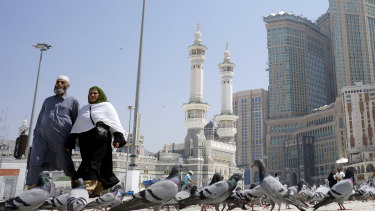 Muslim worshippers walk past pigeons after the noon prayers outside the Grand Mosque, in the Muslim holy city of Mecca, Saudi Arabia, on Saturday. The kingdom has taken unprecedented measures against the virus’ spread, including halting all pilgrimage in Mecca, Islam’s holiest site.Credit:AP

Analysts say that the kingdom needs a so-called break-even price of about $US80 a barrel to meet its budget without either further drawing down those reserves or adopting painful austerity measures. But the price on Monday fell to about $US35 a barrel, less than half the break-even price.

A downturn of as much as two years could cut into those reserves severely enough to put pressure on the Saudi exchange rate as well as the plans to diversify the economy, Hertog said.

Mohammed's economic plan for the country centred on a public offering of shares in the Saudi state oil company, Aramco, to raise money to invest in other sectors. But plans for a debut on a major international market were pulled in favour of the more lax Saudi domestic exchange, and over the last two days the oil price cut has sent shares tumbling by 20 per cent, shaving $US320 billion off the value of the company. 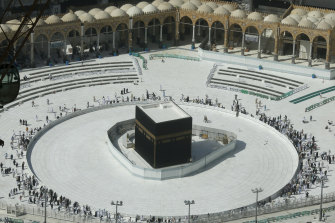 Few worshippers were allowed to enter after dawn prayers to circumambulate the Kaaba in the Grand Mosque, in Mecca, over fears of coronavirus.Credit:AP

The timing of the price war so soon after the round-up of his royal relatives on Friday has aroused speculation that Mohammed sought to contain potential opponents in anticipation of trouble. Perhaps he wanted to preempt any foes before economic pain from the downturn made him politically vulnerable, some suggested.

"The threat to MBS is not coming from his royal rivals," argued Kristin Smith Diwan, a scholar at the Gulf States Institute in Washington. "It is coming from the collapse in oil revenues and what that does to his ambitious economic plans."

But other analysts, former diplomats and officials with experience in Saudi Arabia, and Saudis close to the royal court said that Mohammed had consolidated power so thoroughly that he had little left to fear.

With a level of ruthlessness unprecedented in modern Saudi history, Mohammed has seized more direct power over the kingdom than any monarch in decades, largely by intimidating into submission his own sprawling ruling family. Even in a severe downturn, the members of the royal family he detained had little hope of challenging him. 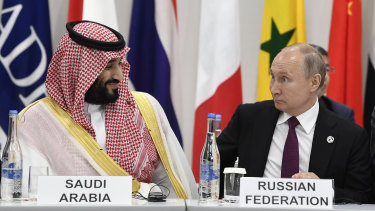 He had already put the same royals under tight surveillance, limiting their ability to plot against him, according to people close to the royal court.

A spokesman for the Saudi government did not respond to a request for comment on Monday.

The most senior figure detained, Prince Ahmed bin Abdulaziz, more than 70 years old, had once been recorded in London making comments distancing himself from the crown prince's policies but had since appeared submissive, at least in public.

The other prominent royal detained, Prince Mohammed bin Nayef, had already been under house arrest since 2017, when he was removed from his posts as crown prince and interior minister by the current crown prince.

Previous Saudi rulers might have provided some advance warning to Washington and London before such high profile detentions, former diplomats said. Mohammed had met in Riyadh last week with British Foreign Secretary Dominic Raab and last month with US Secretary of State Mike Pompeo.

Yet the prince gave no indication that the arrests were imminent, according to diplomats and other officials with knowledge of the matter. 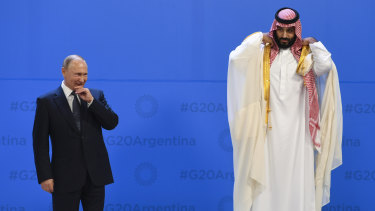 Western officials worry about the "reputational risk" of associating with such an unpredictable leader, said Emile Hokayem, a scholar at the International Institute for Strategic Studies. But so far Mohammed has faced few adverse consequences.

He has led a five-year military intervention in Yemen that has produced a humanitarian catastrophe. The United Nations envoy to Yemen Martin Griffiths on Saturday warned of intensifying fighting in the oil and natural gas-rich province of Marib during a visit to the city.

"Yemen is at a critical juncture: it will either silence the guns and resume the political process, or we will slip back into large-scale conflict and suffering," Griffiths said.

"Marib has been a haven for hundreds of thousands of displaced Yemenis. Just last week, thousands of families arrived here fleeing fighting in al-Jawf."

The prince also rounded up hundreds of his royal relatives and other wealthy Saudis in a Ritz Carlton hotel in 2017 to squeeze them for repayment of what he claimed was self enrichment. He even temporarily kidnapped the then prime minister of Lebanon Saad Hariri in 2017 and forced him to announce a resignation (which the Hariri later retracted).

American intelligence agencies concluded that in 2018 Mohammed ordered the killing of Jamal Khashoggi, a Saudi dissident and Washington Post columnist who lived in the US.

Since then, some analysts have seen signs of maturation, in particular his pulling back from a potential armed clash with his nemesis, Iran, last year. At a meeting last year in Japan of the leaders of the world's 20 largest economies, Mohammed was welcomed as a fellow statesman and tapped to host the group's next summit in Riyadh. 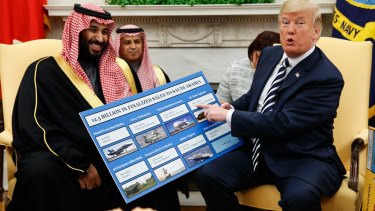 President Donald Trump called him "a friend of mine."

"You have done a spectacular job," the President told him.

And when the crown prince shook world markets on Monday, Trump emphasised the positive.

"Good for the consumer, gasoline prices coming down!" he said in a Twitter posting.

Andrew Miller, a researcher for the Project on Middle East Democracy and a former State Department official, said the detentions and price war were "just MBS".

"Contrary to what many had said previously, he has not learnt any lessons and he has not matured," Miller said. "He has drawn the opposite lessons, that he is above the law, because Saudi Arabia is so important to its Western allies that he will always be welcomed back into the fold."