Second wave of Covid-19 this winter could lead to more than 120,000 extra deaths, scientists warn

A second wave of coronavirus this winter could result in 120,000 hospital deaths, scientists warn.

Action must be taken now to mitigate the ‘reasonable worst case scenario’ which would see the NHS overwhelmed, the Academy of Medical Sciences says.

The grim forecast – which does not include care home deaths – was commissioned by the Government’s chief scientific adviser, Sir Patrick Vallance, to help preparations.

It warned that hospitals could see 120,000 Covid-19 deaths between September and June while also battling a surge in demand from usual winter pressures such as flu. 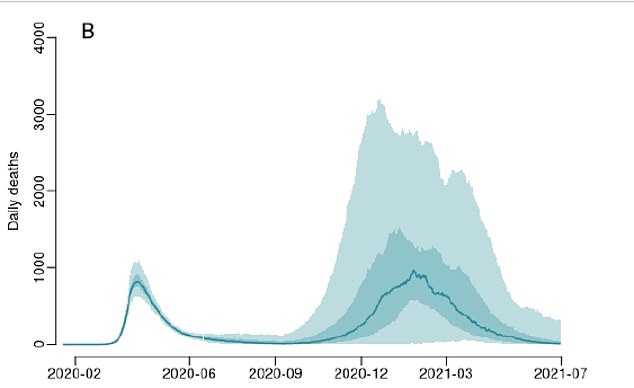 Modelling by the Academy of Medical Sciences estimates more than 120,000 people could die from coronavirus this winter in a ‘reasonable worst-case scenario’ 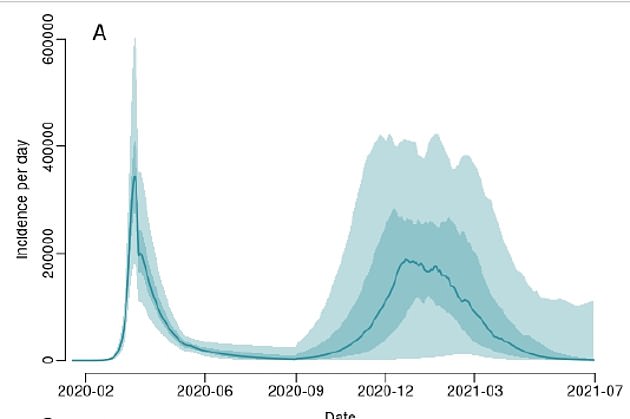 The modelling presumed the R – the average number of people each Covid-19 patient infects -would rise to 1.7

But daily death toll is down to 11

Britain’s coronavirus death rate has risen by its lowest daily level since mid-March, figures have revealed.

Only 11 deaths were reported in care homes and hospitals yesterday – the lowest daily rise since March 12.

The latest figures from the Department of Health show that the overall death toll is 44,830. But this is thought to be an underestimate as it includes only those who were confirmed to have the virus.

Figures released by the Office for National Statistics last week, which includes those suspected of having Covid-19, suggests that over 55,400 have died.

Although the death rate is typically lower at weekends and on Monday, the decline in numbers is a sign that the pandemic is easing. But yesterday the World Health Organisation warned that if the public does not adhere to advice, the pandemic will get ‘worse and worse’.

The estimate was based on the R rate, which measures the virus’s ability to spread, rising to 1.7 – roughly half the level of its peak infection rate – from September.

While measures have been successful in reducing it below 1, scientists fear it could climb again as lockdown eases and winter allows viruses to spread more easily.

The study by 37 scientists and academics, Preparing For A Challenging Winter 2020/21, suggests the peak of any second wave would hit hospitals in January and February, when the Health Service is traditionally most stretched.

Professor Stephen Holgate, a Medical Research Council clinical professor of immunopharmacology who led the study, said: ‘This is not a prediction, but it is a possibility. The risk could be reduced if we take action immediately.’

One vital preparation will be to ensure as many health and care workers, children and vulnerable people as possible are vaccinated against flu.

And the NHS test and trace programme must be scaled up to cope with the surge of various winter illnesses with similar symptoms to Covid-19 to ‘disentangle’ patients who have coronavirus from those with flu and other respiratory viruses.

A rapid system of monitoring must be established, the report said, and hospitals must clear the huge backlog of postponed treatments – which could be added to in a second coronavirus wave.

Professor Azra Ghani, an expert in infectious disease epidemiology at Imperial College London who worked on the study, said the figure of 120,000 deaths was based on more social contacts at work, school and gatherings, combined with winter conditions which tend to aid the spread of viruses.

‘We tried to capture something that we think might happen if absolutely everybody almost forgot about Covid,’ she said. ‘It doesn’t mean we think it’s likely to happen, it’s really to get a sense of what it could look like and why we must remember Covid has not gone away… and why we must act now.’ 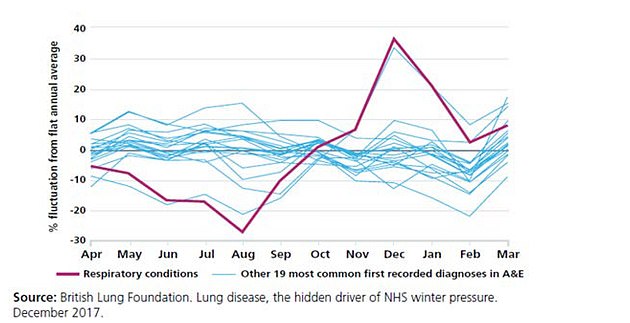 The number of patients suffering from respiratory conditions from August until March surges, data from the British Lung Foundation shows

The figures also do not do not take into consideration future lockdowns or the recent success of a trial of the steroid dexamethasone, which slashed death rates in Covid-19 patients.

Both of these could substantially reduce the number of coronavirus deaths in the UK, the researchers conceded.

Health Secretary Matt Hancock said he plans the ‘biggest flu vaccination programme in history’ as part of a drive to stop the NHS being overwhelmed this winter. 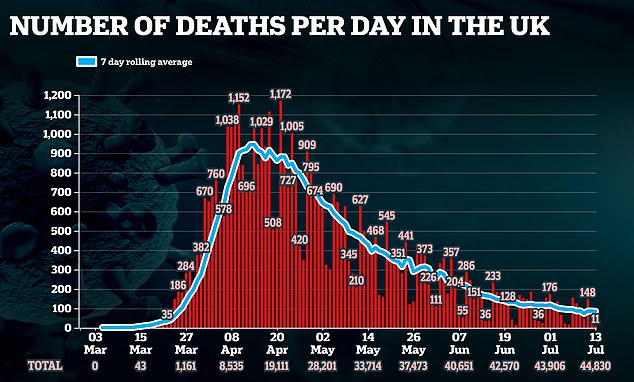 A further 21 people have died from coronavirus in 24 hours bringing the UK’s total death toll to 44,819 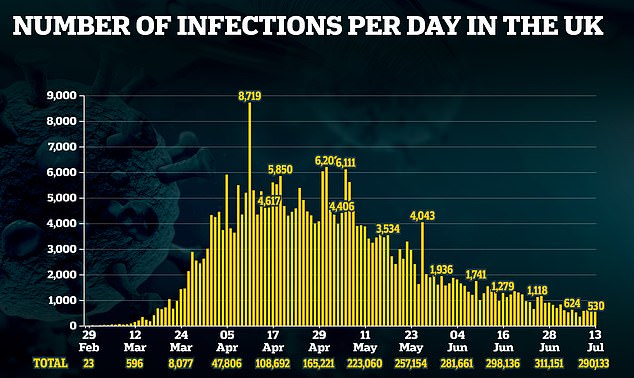 ‘We have procured enough vaccine to be able to deliver on that, but then it’s a big task,’ he told a virtual conference of the National Pharmacy Association. We all know that, having had an incredibly hard six months, the next big moment is as winter approaches.’

The Government is also working on a coronavirus vaccination programme should a successful vaccine be found, he said.

Health bosses fear 10million people in England alone could be waiting for treatment and tests due to Covid-19 disrupting services this year.

People spend more time indoors during the colder months, where infectious illnesses like the coronavirus and the flu find it easier to spread.

A lack of the immune system-boosting vitamin D, made by the body when it’s exposed to sunlight, also makes illnesses more common.

‘This is due to a combination of seasonal infections such as flu, and the effects of colder weather, for example, on heart and lung conditions.

‘This winter we have to factor in the likelihood of another wave of coronavirus infections and the ongoing impacts of the first wave. We have to be prepared that we might also experience a flu epidemic this year.

‘Faced with these potential challenges, and after an already tough year, it would be easy to feel hopeless and powerless.

‘But this report shows that we can act now to change things for the better. We need to minimise coronavirus and flu transmission everywhere, and especially in hospitals and care homes.

‘We need to get our health and social care, and the track, trace and isolate programme ready for winter. This can be done, but it must be done now.’

Wards where the chance of dying is SIX times higher

A patient’s chance of dying from Covid is hugely dependent on where they are treated in hospital, NHS data reveals.

One trust in the South West has a mortality rate of 80 per cent, while at one in London it is only 12.5 per cent.

Doctors say the variation is ‘concerning’ and cannot be explained solely by some hospitals covering areas with older populations who are more at risk.

NHS England has plotted the death rates for all 135 acute hospital trusts in the country.

It has not identified them by name, only by region. The second-highest rate is 68 per cent, by a trust in the North West, with another in the South West at 62 per cent.

The second-lowest rate, 13 per cent, is in the Midlands with another London trust at 14 per cent, according to data obtained by The Guardian.

Dr Nick Scriven, a former president of the Society for Acute Medicine, said the range was ‘concerning’, adding: ‘[It] does look larger than you would expect and should prompt further analysis.’