Shanghai morgue workers reacted in a flustered disbelief when they discovered an elderly patient they were delivering to the morgue in a body bag was still alive.

The incident took place in the metropolis’ Putuo District on Sunday as Chinese authorities impose a merciless lockdown on the city’s 25 million inhabitants in a bid to enforce their zero Covid policy.

A video showing the bumbling workers in full Covid PPE went viral on Chinese social media, sparking outrage among a populace already raging at the heavy-handed actions of Shanghai authorities.

The Putuo district authorities yesterday announced an investigation and that they had sacked five officials involved in the blunder.

The video shows two staff from the nursing home and one mortuary worker loading the body bag into the back of a hearse.

Moments later they take it out again, open it up and pull a cover from the man’s face. 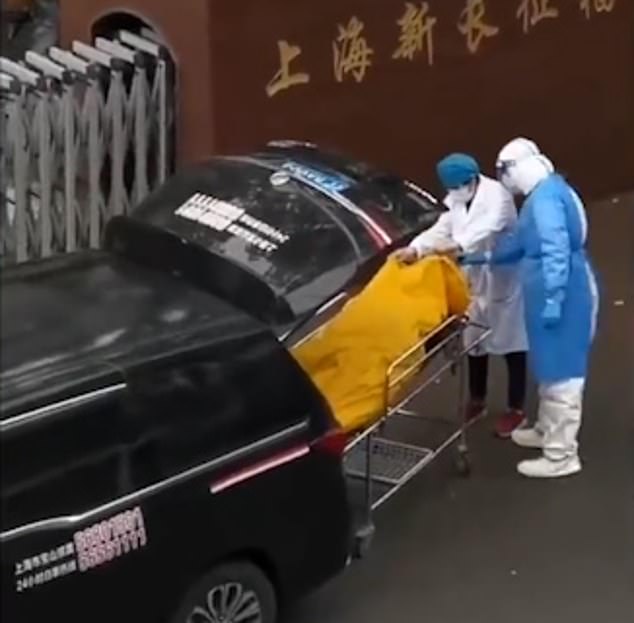 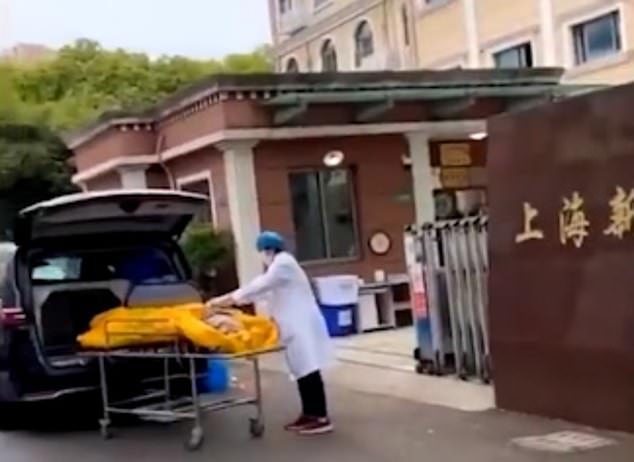 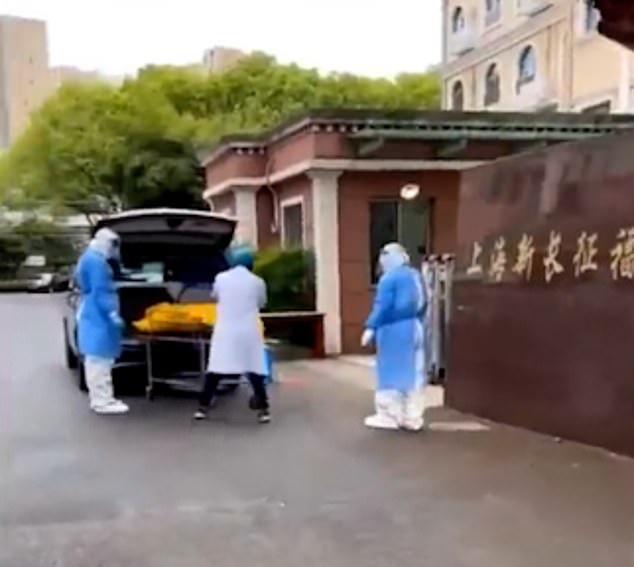 But one of the workers can be seen covering the man’s face again even after realising he was still alive.

They then transfer him back to the nursing home with the elderly man still inside the body bag.

The person filming can be heard calling the incident a ‘disgrace for human life’, adding: ‘Now they’re discussing what to do. Get them out of there; what else can you do? What you’re doing is immoral.

‘They’re not even dead, and they’re put in a van to go to the funeral home.’

Authorities said in a statement the man was receiving treatment in hospital in a stable condition.

‘On the afternoon of May 1, reports were posted online that a so-called dead body being transferred from the Shanghai New Long March Care Home was found to show signs of life,’ it said.

‘Putuo district government … launched an immediate investigation and sent the elderly man to receive treatment in hospital, where he is currently stable.’

Authorities announced that the doctor who signed the death certificate has been struck off and four senior officials in the Putuo government would be fired.

The care home that sent the man to the mortuary apologised for the mistake.

The incident is seen as symptomatic of the callous and inhumane zero Covid policy which has seen millions of residents trapped in their apartments with little access to basic necessities such as food and water.

Social media users were scathing of the incident, with one comment saying: ‘Shanghai is a terrfying place!’ and another talking of the ‘chaos’ engulfing China’s biggest city.

Another user wrote: ‘This incident took place in one of China’s most prosperous cities and happened to be filmed. How much is happening in other cities that is not caught on camera? Today, it’s this man, in the future, it’s us.’

The streets of many districts in Shanghai have been like ghost towns in recent weeks, populated only by the white-clad Covid workers who enforce the lockdown on residents.

Under the harsh lockdown rules, most people are strictly forbidden from leaving their homes for any reason. Those with Covid are forced to state-run quaratine centres.

Roughly 400 deaths from Covid have been reported in Shanghai care homes but there is suspicion that this figure is underreported, with other causes being listed on death certificates.

Only 62 per cent of over-60s have ben fully vaccinated and for over-80s the number drops to 15 per cent. There are also doubts about the efficacy of the Chinese vaccine Sinovac.

A study by the University of Hong Kong found that two jabs from Sinovac would provide ‘insufficent’ antibodies against the Omicron variant currently ripping through Shanghai.