Heart-stopping footage captured the moment a helicopter went down on Miami’s famous South Beach, smashing into the azure waters just feet away from swimmers.

It plunged towards the turquoise Atlantic waters that were filled with hundreds of swimmers and paddlers enjoying the balmy Florida weather.

Moments later, the chopper hits the water just off Tenth Street, sending an almighty splash into the air.

Miraculously, no-one was killed by the impact.

Two people who were in the helicopter have been hospitalized, and are said to be in a stable condition, with part of the beach closed off while cops investigate what happened. 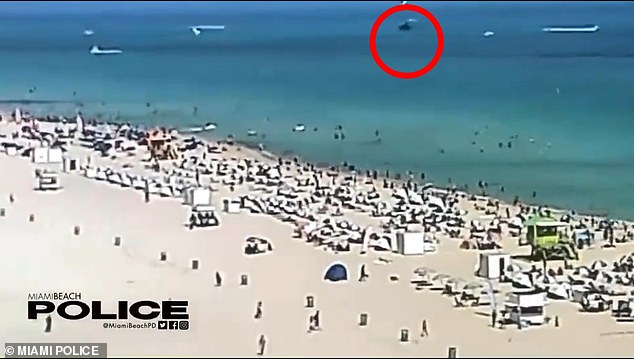 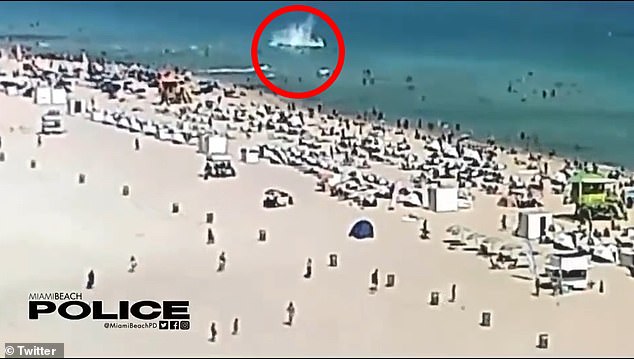 Moments later it slams into the Atlantic with a huge splash. Two people inside the helicopter were taken to hospital in a stable condition

A Miami Beach Police spokesman tweeted: ‘This afternoon at 1:10 p.m., MBPD received a call of a helicopter crash in the ocean near 10 Street.

‘Police and @MiamiBeachFire responded to the scene along with several partner agencies. Two occupants have been transported to Jackson Memorial Hospital in stable condition.

‘The beach area between 9 to 11 Street is currently closed. The FAA is responding to the scene.

Seconds after the chopper hit the ocean, nearby jet skis powered over to help those injured.

Boats were on the scene shortly afterwards.

It remains unclear if the helicopter that crashed is a commercial or public aircraft, and there is not yet any indication as to why it crashed.

Stunned onlookers shared clips of the crash aftermath. One Twitter user called stan the man said: ‘I’m sittin on south beach Miami… a f****** helicopter has just crashed into the sea in front of us…

The Federal Aviation Authority is set to launch an investigation into the incident.