Manila: The Philippine President has threatened to order police to shoot "troublemakers" and stop a massive food and cash aid if people resort to riots and defy a lockdown imposed on millions to fight the coronavirus outbreak.

President Rodrigo Duterte said in a televised speech that he also would ask the police to punish people who attack doctors and health workers with toxic chemicals by dousing the offenders with the potentially lethal substance or force them to drink it. Troublemakers would starve in jails, he warned. 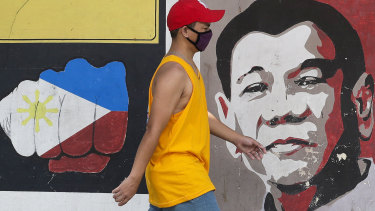 A man wearing a protective mask walks past an image of Philippine President Rodrigo Duterte in Manila.Credit:AP

Duterte, who has been condemned for his brutal anti-drugs crackdown that has left thousands of mostly poor suspects dead, issued the warnings hours after police broke up a rally by slum dwellers pleading for food aid and arrested 21 of them in suburban Quezon city.

"My orders are for the police, the military and the villages, in case there's trouble and there's an occasion where they fight and your life is threatened, shoot them dead," Duterte said, adding that the viral outbreak "is getting worse".

Amid delays and widespread complaints in the distribution of promised cash and food packs, Duterte said he was transferring that responsibility from politicians to a department led by an ex-general and warned he would be harsh with those who would steal the aid.

The Philippines has reported 2311 cases of the COVID-19 illness, including 96 deaths, and expects infections to soar after more test kits arrived and laboratories were opened.