Six prisoners have died after a series of jailhouse riots in Italy which were sparked by tough new measures to stop the spread of coronavirus.

Inmates set their prison on fire in Modena yesterday in an angry protest over a ban on family visits, unions said.

Six inmates are confirmed to have died, including three who had been transferred to different prisons as authorities tried to quell the uprising.

Justice ministry sources said two of the deaths in Modena were caused by an overdose from drugs found in the jail infirmaries, while a third prisoner was found blue in the face and their cause of death was still unclear.

Police were today clashing with relatives who had gathered outside the jail, in northern Italy which is at the centre of the virus outbreak.

The riot was one of several around the country with other disturbances taking place in Salerno, Naples and Milan among others. 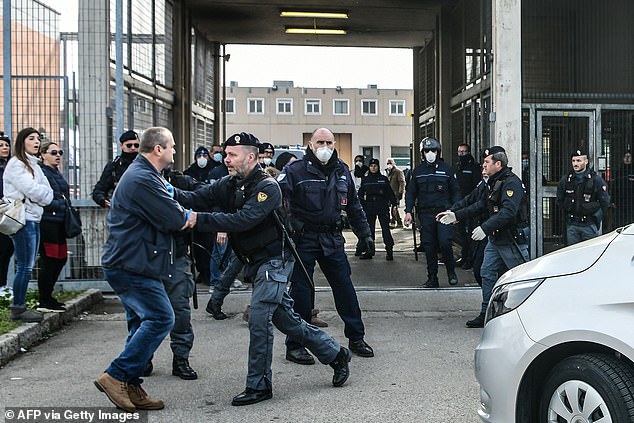 A relative of an Italian prison inmate clashes with police outside the SantAnna jail in Modena today, where six prisoners died yesterday following riots 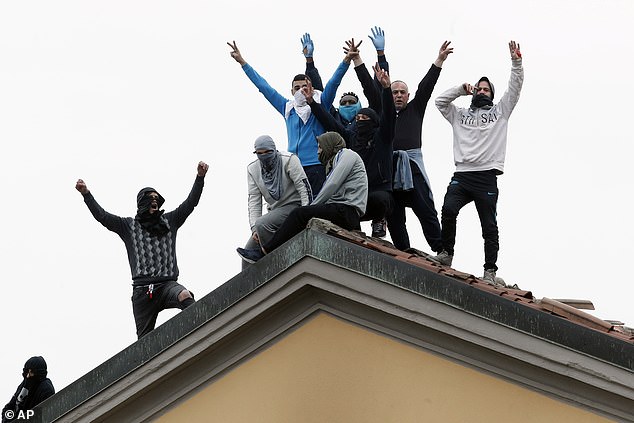 Inmates stage a protest on the roof of the San Vittore prison in Milan today, in northern Italy where drastic new measures have been imposed to stop the spread of coronavirus 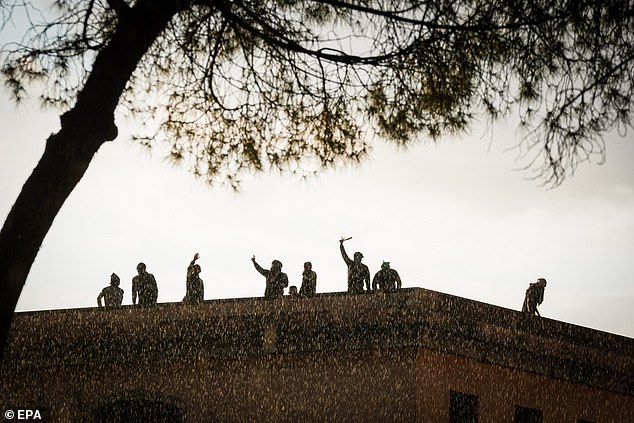 Inmates protest on a wall of the Poggioreale prison in Naples yesterday, in southern Italy outside the area that has been quarantined

According to Il Corriere, a group of 60 inmates set fire to the prison in Modena after the tough new measures were announced.

Footage broadcast by local media showed police and fire trucks outside the prison as black smoke swirled into the sky.

Around 500 people were at risk of escaping until authorities laid siege to the penitentiary and eventually stormed the building.

Once inside, they discovered a ‘surreal scene and a devastated building’, reports say, seizing a supply of drugs.

The head of Italy’s prison service, Francesco Basentini, said three inmates had at the jail and three others had died after being transferred to other prisons.

‘There have been a series of rebellions across the country,’ Basentini said in a televised interview.

Prison officers’ union Sappe said some 80 prisoners had been transferred to other jails after the uprising.

‘The inmates that have been moved were those who managed to reach the yard in a bid to escape,’ Seppe’s secretary general Giovanni Battista Durante said.

‘We are told other prisoners inside the jail have barricaded themselves in and probably have illegal weapons’.

He said colleagues from the prison had told him the jail had been ‘completely destroyed’. 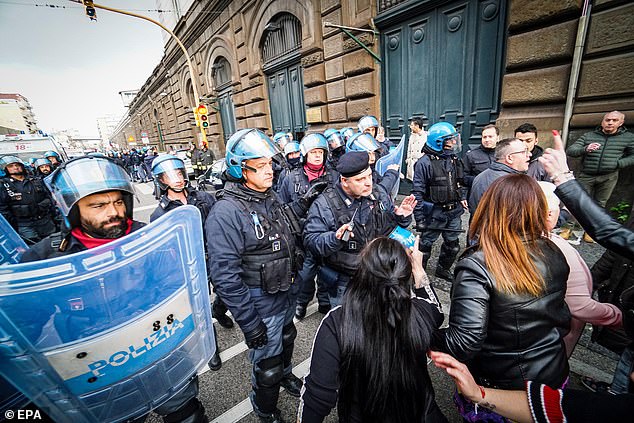 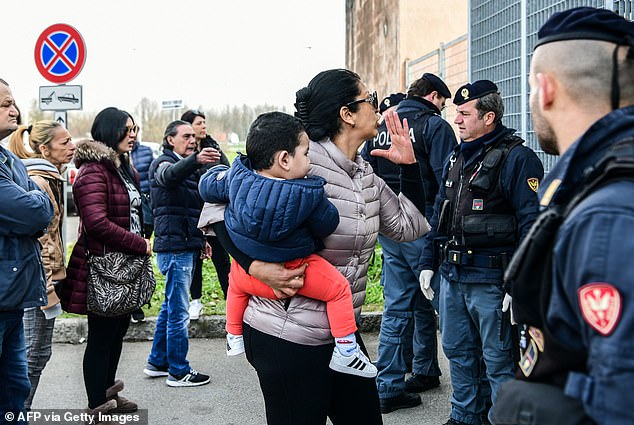 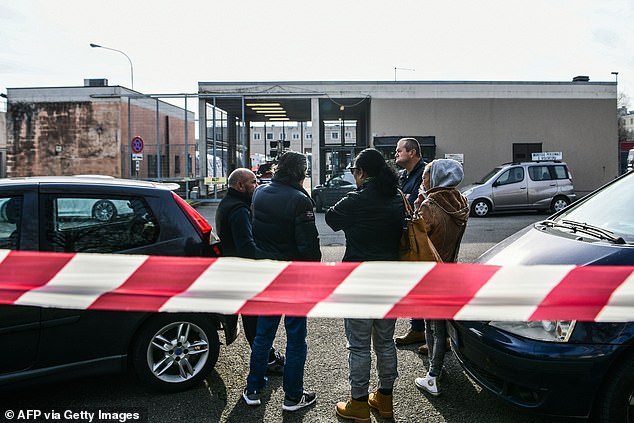 Two of the Modena prisoners are believed to have died of drug overdoses, while another was found dead with their skin coloured blue.

At least another four inmates are reportedly in hospital in serious conditions, while at least two prison officers were injured.

In an emergency decree on Sunday, the government imposed limits on direct contact between inmates and their families.

Prisoners will be allowed to contact visitors by phone or other remote methods under the measures, in place until March 22.

Rights group Antigone called on authorities to help prisoners communicate with their families, but urged the inmates to keep calm, while wardens called for a crackdown.

‘All necessary measures must be taken to reduce tension and, meanwhile, we appeal to all prisoners to stop all violence,’ Antigone said yesterday.

‘We had already warned tensions were growing in prisons, and that we feared it could end in tragedy,’ it said in a statement following the revolts.

‘All necessary measures must be taken to ensure prisoners their full rights, stopping this escalation of tension and preventing others from dying. One death is already too much,’ it said.

Far-right League leader Matteo Salvini said: ‘The gates of the prisons shouldn’t be thrown open with the excuse of the revolts.’ 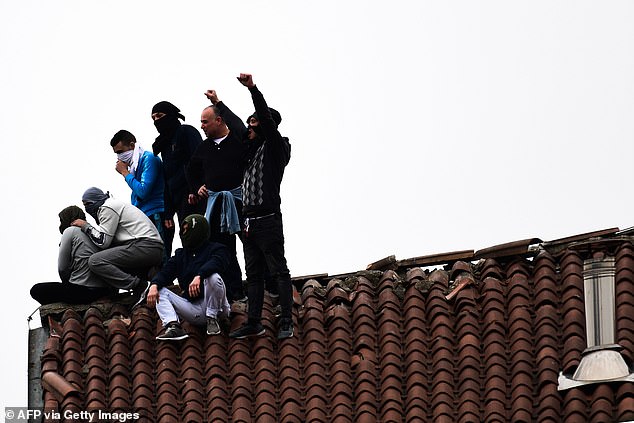 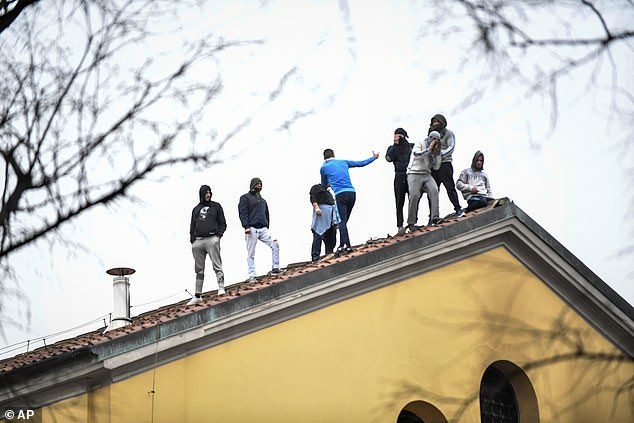 Inmates stage a protest against new rules to cope with the coronavirus emergency, as they stand on the roof of the San Vittore prison in Milan today 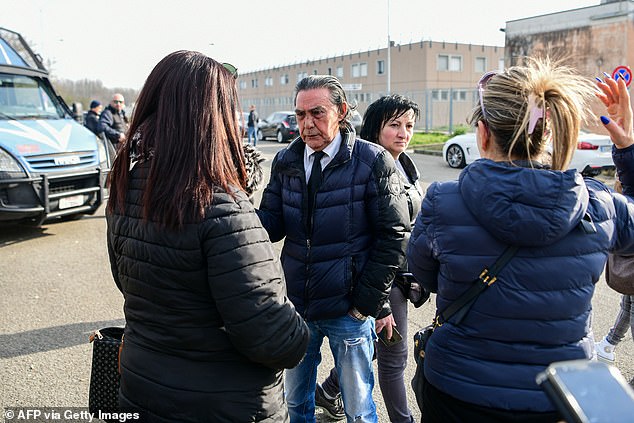 Relatives of inmates gather outside the SantAnna prison in Modena, Emilia-Romagna, inside the quarantined zone in northern Italy

Prisoners also revolted at Naples Poggioreale in the south, Frosinone in central Italy and Alexandria in the north-west, unions said.

Similar scenes played out in Padova in the north and Bari, Foggia and Palermo in the south, media reports said.

At Frosinone, south of Rome, police had to be called in to restore order after about a hundred prisoners barricaded themselves into a section of the prison.

At the Torre del Gallo jail in Pavia, south of Milan, two guards were reportedly taken temporarily hostage, enabling prisoners to steal the keys and release their fellow convicts.

Italian media said there were reports of violence against guards and between rival prisoner gangs.

At Frosinone, south of Rome, police were called in to restore order after about 100 prisoners barricaded themselves into a section of the prison.

The protesting inmates drew up a list of demands, including the right to have visits, and tried to negotiate with the prison management, the Agi news agency reported.

Families of some of the inmates at Poggioreale, a suburb of Naples, gathered outside the prison to support them.

Sappe said two guards had been taken hostage in the northern city of Pavia and were released after a police raid.

The uprisings came as Italy issued new nationwide rules to try and stem the spread of the virus, which has killed 366 people so far and infected 7,375.

It is now the second-worst affected country in the world, behind China.