The Party’s OVER: Social bubble could be limited to just 10 family and friends until 2021 as scientists warn weddings, birthdays and church are the worst coronavirus ‘super-spreader events’

Social bubbles could be limited to fewer than ten people and super-spreader indoor events could be banned until well into 2021 to avoid a second peak of coronavirus infections, scientists revealed.

Senior epidemiologist Adam Kucharski has warned Britain could face ‘exponential growth’ in Covid-19 cases if groups of people start getting together to celebrate as lockdown measures are eased.

‘Look at where these super-spreading events occur, it’s often at family gatherings and meals and weddings and parties and all these things that socially we want to happen,’ Dr Kucharski told The Sunday Times.

His team at the London School of Hygiene and Tropical Medicine found the usual infection rate sees one person spread the virus to an average of three others. 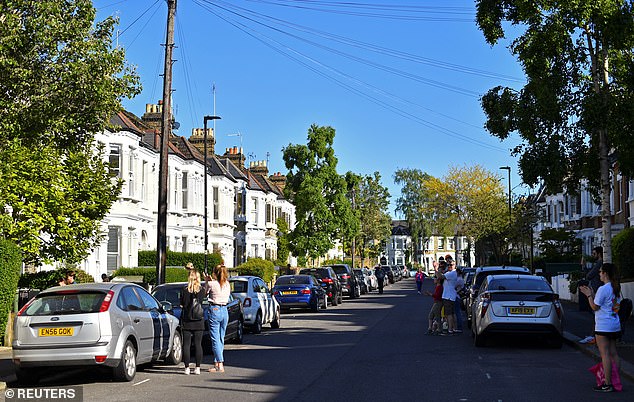 Senior epidemiologist Adam Kucharski has warned Britain could face ‘exponential growth’ in Covid-19 cases if groups of people start getting together. Pictured, people social distance as they gathered for a street party in Clapham on April 25

But when large groups meet in badly ventilated environments the infection rate soars.

Dr Kucharski, author of bestselling book about epidemics The Rules of Contagion, said: ‘As soon as measures are lifted, we risk being back where we started, facing exponential growth.’

‘It seems likely that these kinds of close interactions between people will need limitations.’

Another study, by the Division of Molecular and Clinical Medicine at the University of Dundee, found social groups outside of the home, school and work should be limited to five people.

Social contact, defined by the study as a conversation or physical touch, should be kept at no more than ten people each day, the authors said, to make contact tracing possible. 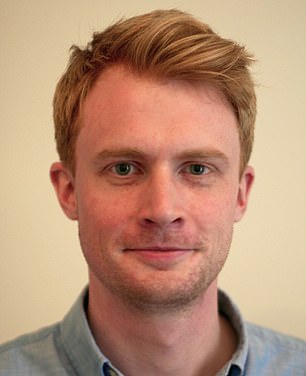 They told The Sunday Telegraph: ‘Lockdown can barely contain the disease’s spread.

And Brits will have to ‘substantially’ reduce the level of social interaction they were having before the pandemic to ensure the number of cases doesn’t start to rise out of control.

‘Our data is more consistent with a need to adopting a “new normal” that can provide the optimal balance between allowing economic activity while ensuring very substantial reductions in prior social contacts – 90 per cent reductions according to our best estimates.’

In research published last week Dr Kucharski’s team found the transmission rate while exercising in a park was ‘very low’ and those under the age of 20 were 75 per cent likely to be asymptomatic.

For over 70s there is only a 24 per cent chance of having the virus but not knowing about it.

The outbreak in the UK is two weeks behind Italy’s, meaning its daily death and infection jumps are decreasing at a slower rate.

It comes as the government is preparing to lift restrictions on outdoor activities such as picnics as the first stage in relaxing the lockdown rules. 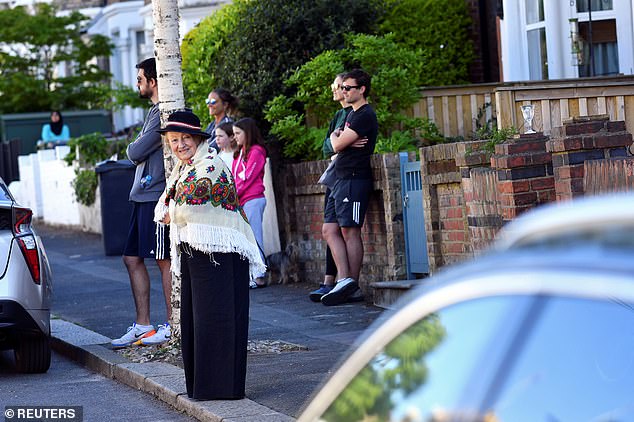 Brits will have to ‘substantially’ reduce the level of social interaction they were having before the pandemic to ensure the number of cases doesn’t start to rise out of control. Pictured, a street party in Clapham on April 25

Ministers are understood to be ‘optimistic’ people will download a phone app to trace the spread of coronavirus, but conceded the task to get the contact tracing system running remains ‘significant’.

Communities Secretary Robert Jenrick said he thought the ‘vast majority’ of people would download the app and ‘play their part’ – though insisted it was just one element of the plan to stop the spread.

Contact tracing will be central to the Government’s efforts in slowing the spread of coronavirus, and will involve alerting people who have been in contact with an infected person and asking them to self-isolate.

It has been used extensively in South Korea, Hong Kong and Germany, where outbreaks have been contained more quickly.

The Government intends to use an app and a phone team to carry out the tracing.

Mr Jenrick told the daily Downing Street press conference: ‘Contact tracing will rely on all of us in society playing our part but I’m optimistic about the prospects for that. 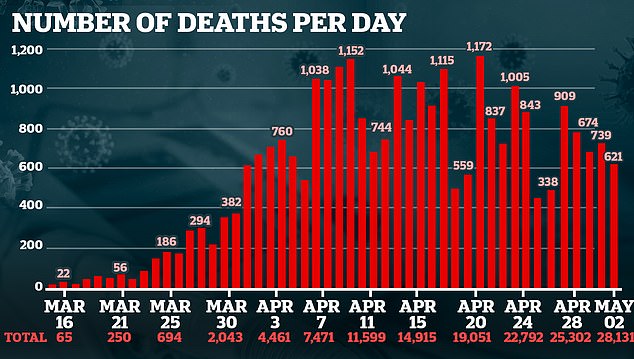 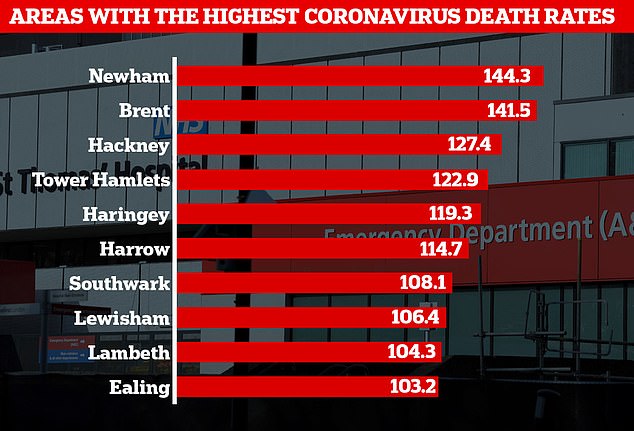 Boroughs in London accounted for all of the top ten worst hit local authorities, the report showed

‘This has been a national effort so far – if you think of the different measures that we’ve brought forward, the restrictions, the vast majority of people have got behind it and I think that they will do again when we are able to launch the app on a national scale.’

Deputy chief medical officer Dr Jenny Harries said to get contact tracing ‘up and running at scale and effectively’ is ‘another significant task but (there is) lots of preparation under way’.

She said: ‘We need the whole population to work with us on this, it’s quite an exciting adventure.’ 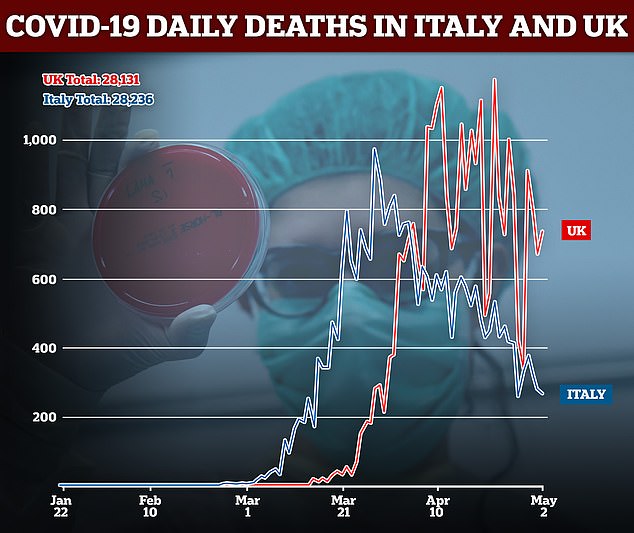 Britain’s death toll (28,131) is bound to overtake Italy’s (28,236) by next week and make the UK the second worst-hit country in the world, behind only the US (65,173). The outbreak in the UK is two weeks behind Italy’s, meaning its daily death and infection jumps are decreasing at a slower rate

Primary schools could re-open on June 1, with students from Years 10 and 12 becoming the first in a wave of secondary pupils flocking to classes.

Boris Johnson is hoping to put teachers on three weeks’ notice to re-open primary schools in England to all pupils as soon as next month.

Whitehall sources have claimed the earliest possible return of primary schoolchildren is intended to help parents to return to work.

It will also prevent damage being done to ‘early years development’ about which Gavin Williamson has warned, according to The Sunday Telegraph. 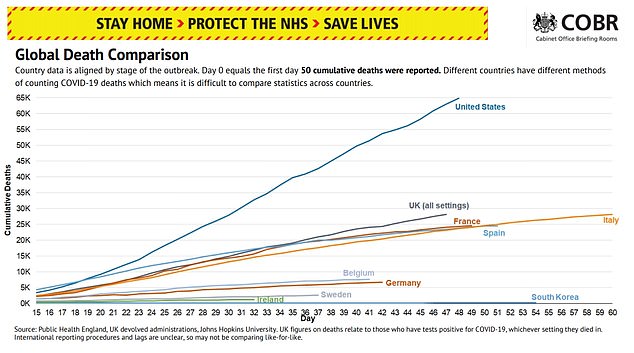 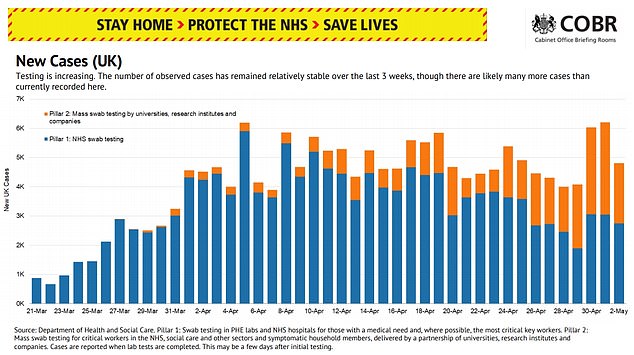 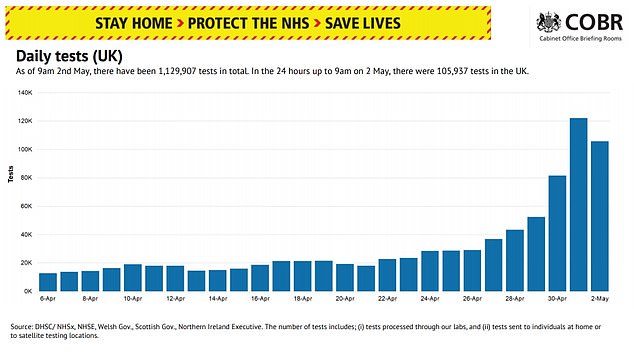 Meanwhile arts students could be the last to return to university after students of medicine, dentistry and veterinary science in the autumn.

A spokesperson for the Department for Education said: ‘Education Secretary Gavin Williamson has not set a date for schools reopening.

‘Schools will remain closed, except for children of critical workers and vulnerable children, until the scientific advice indicates it is the right time to reopen and the five tests set out by Government to beat this virus have been met.’