VIGILANTES in South Africa have said they are "willing to die" to protect the streets from looters as a 14-year-old boy was reportedly shot dead by taxi drivers guarding a mall.

South Africans have taken matters into their own hands as security forces struggle to contain an eruption of violence sparked by the jailing of former president Jacob Zuma. 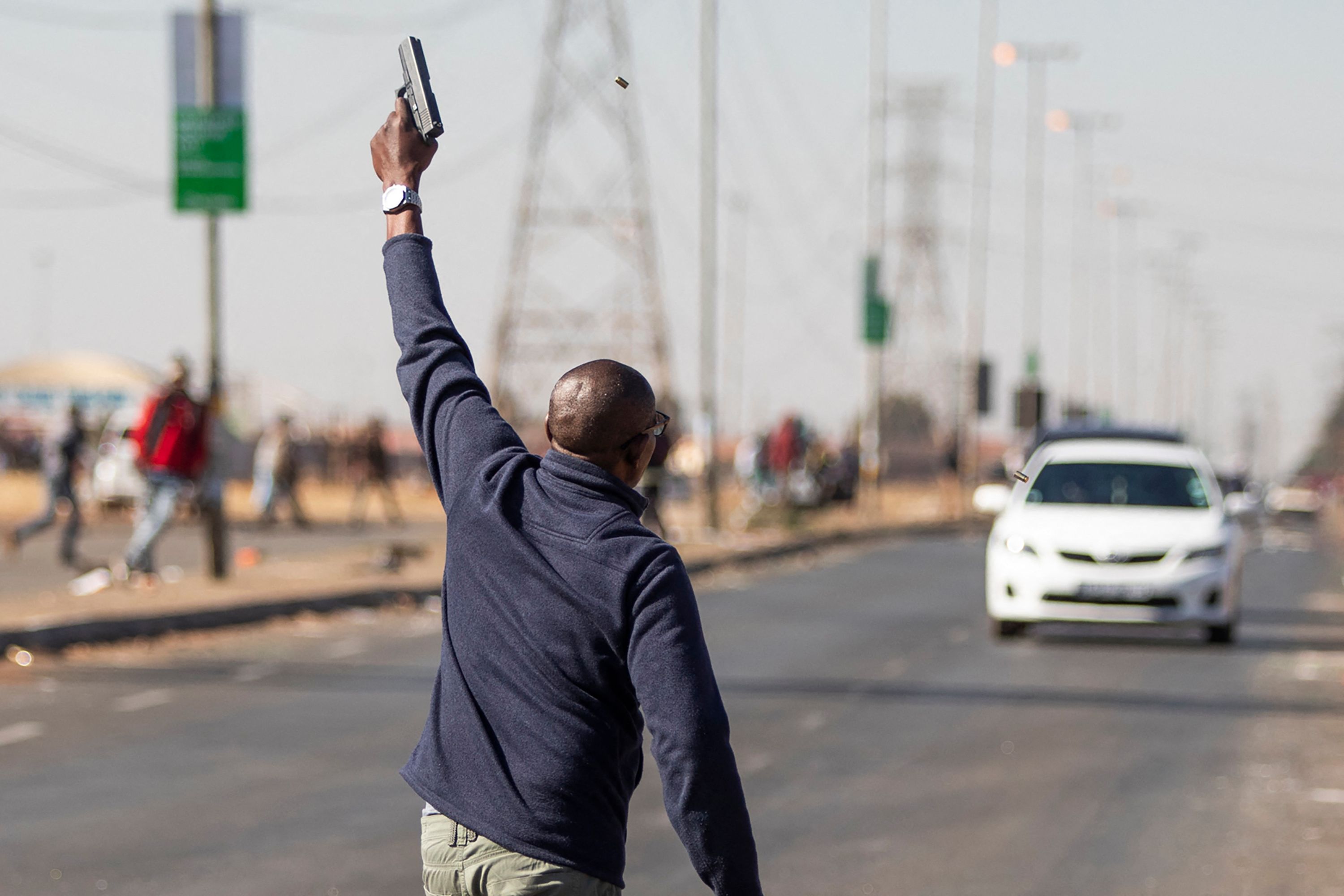 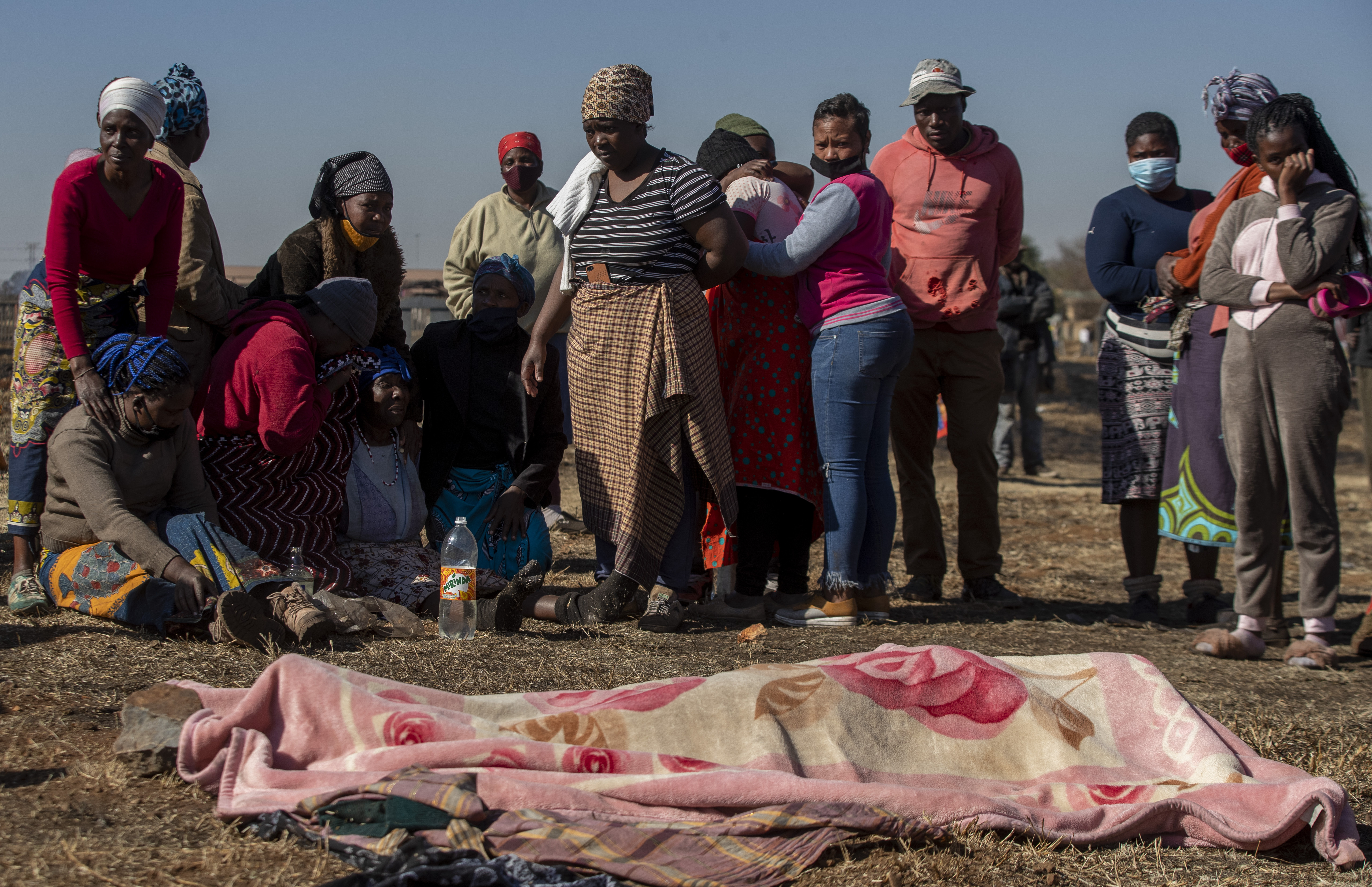 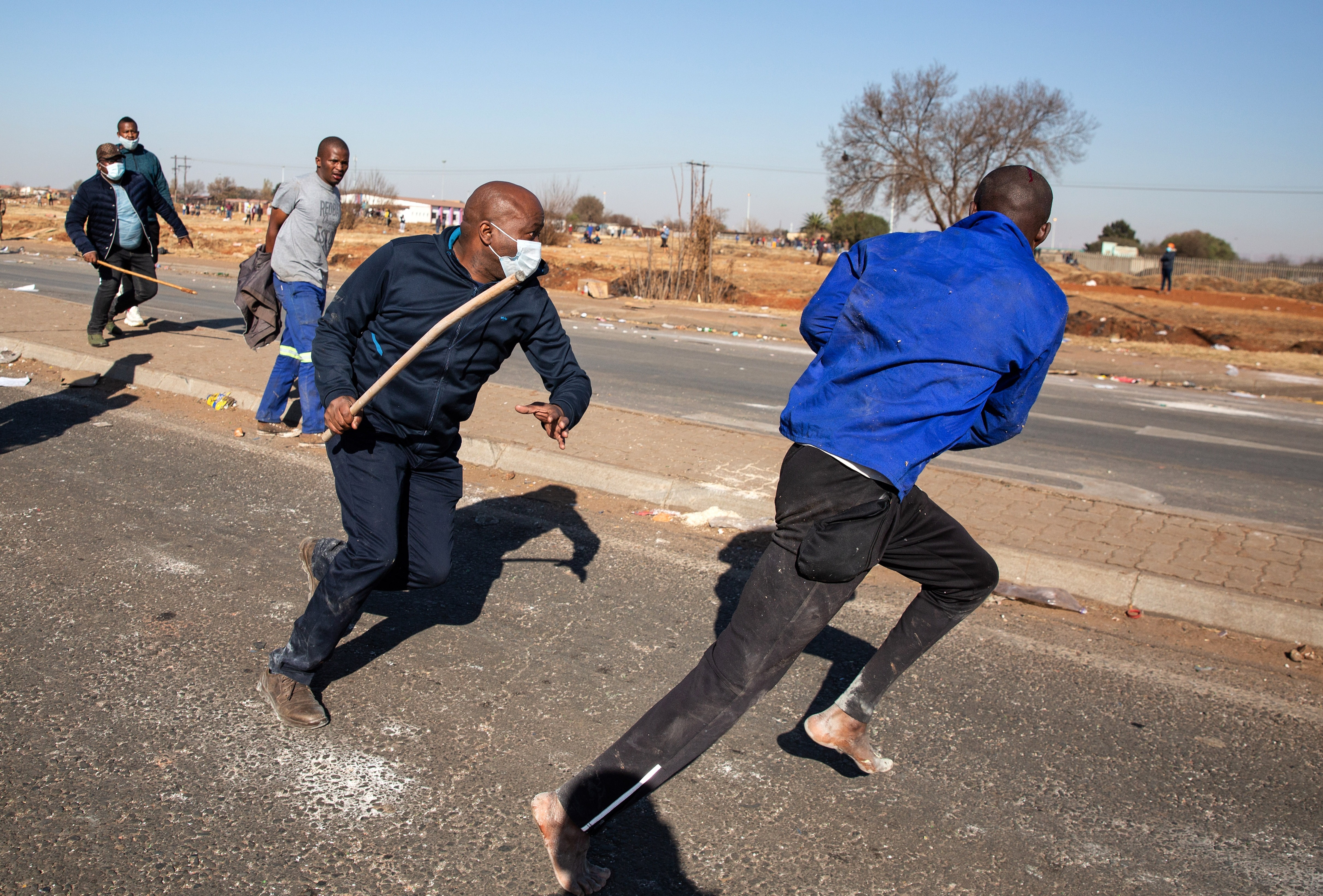 At least 72 people have died and more than 1,200 arrested as thousands of people ransacked shops, stealing food, electrical appliances, alcohol and clothes.

Shocking images showed hundreds of people running towards a warehouse on Wednesday and tearing through containers as the violence battered the country for a sixth day.

Defence minister Nosiviwe Mapisa-Nqakula said 25,000 troops will be deployed in the coming days to assist the overrun security forces.

But armed residents have already taken to the streets to guard buildings as looters snatch everything from food and alcohol to big-screen televisions and furniture.

According to The Times, a guard armed with a rifle told a local TV news crew: "Some of us are willing to die, and it’s not for the camera."

In Durban, armed South Africans set up roadblocks at the entrances to their neighbourhoods, as residents in Tembisa forms a human shield around the Birch Acres shopping mall to stop looters.

But fears are mounting that the vigilantism could fuel the crisis after a 14-year-old boy was reportedly shot dead by armed taxi drivers outside the Chris Hani Mall in Vosloorus.

He was killed around midday on Wednesday when a group of armed taxi operators arrived to chase away suspected looters, News24 reports.

The taxi drivers, who claimed their office at the mall had been ransacked and torched, opened fire after the looters reportedly refused to leave.

But the teenager's brother, Abednigo Sithole, said Dlamini was not part of the group the looters when he was killed.

"Taxi operators are above the law. They killed him in front of the police," Sithole told News24.

A crowd of residents were pictured gathering around Dlamini's body outside the mall, which was covered with a blanket.

It comes as the rampant looting hit supply chains and transport links in the southeastern province of KwaZulu-Natal, sparking fears of food and fuel shortages.

Long queues have formed outside any food shops, petrol stations and pharmacies which are still open, while some residents in Johannesburg are panic-buying goods after shelves were stripped bare in some supermarkets.

President Cyril Ramaphosa has warned parts of the country "may soon be running short of basic provisions following the extensive disruption of food, fuel and medicine supply chains".

Community leader Nhlanhla Lux, 33, told the Financial Times: "We are on the verge of eating each other."

State-owned logistics operator Transnet declared a "force majeure" yesterday – an emergency beyond its control – on a key rail line that links Johannesburg to the coast due to the unrest.

Earlier this week, the country's largest refinery SAPREF shut its plant in Durban, which is responsible for a third of South Africa's fuel supply.

"It's inevitable that we will have fuel shortages in the next couple of days or weeks," the Automobile Association's Layton Beard said.

Christo van der Rheede, executive director of the largest farmers' organisation, AgriSA, said producers were struggling to get crops to market due to the logistical "shambles".

He warned if law and order were not restored soon, "we are going to have a massive humanitarian crisis".

Sugarcane fields were torched in KwaZulu-Natal, the main cane-growing region, while cattle were stolen elsewhere.

The government has been under mounting pressure to increase boots on the ground to quickly put a lid on the violence battering an already struggling economy.

The country's army reserves have now been called on in a bid to curb the violence.

Soldiers should "report ready with their necessary equipment" on Thursday, the defence ministry said in a statement.

The violence has also disrupted the Covid vaccine rollout and medicines deliveries to hospitals.

The country, which has recorded more than 2.2 million infections, is in the middle of a brutal virus third wave. 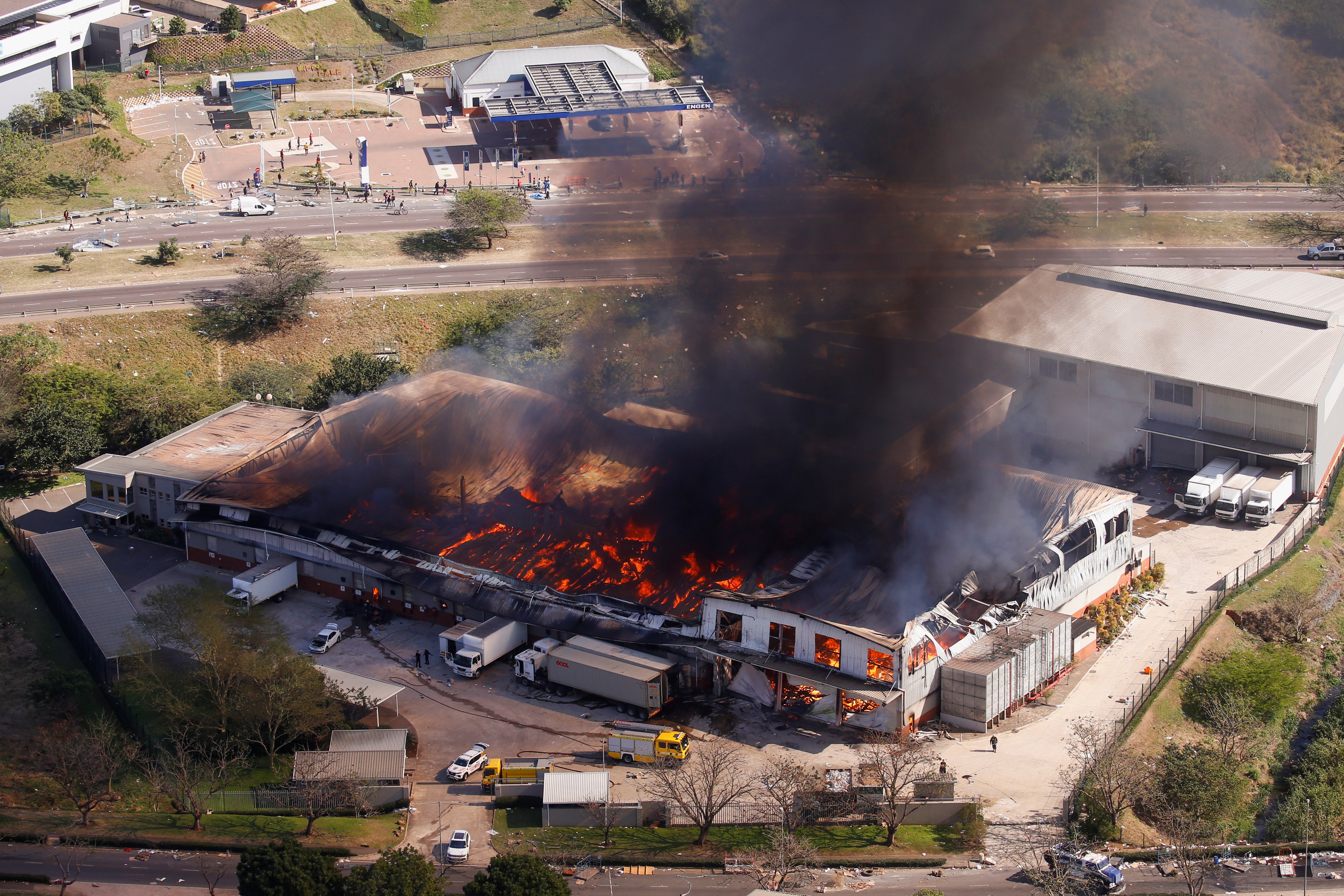 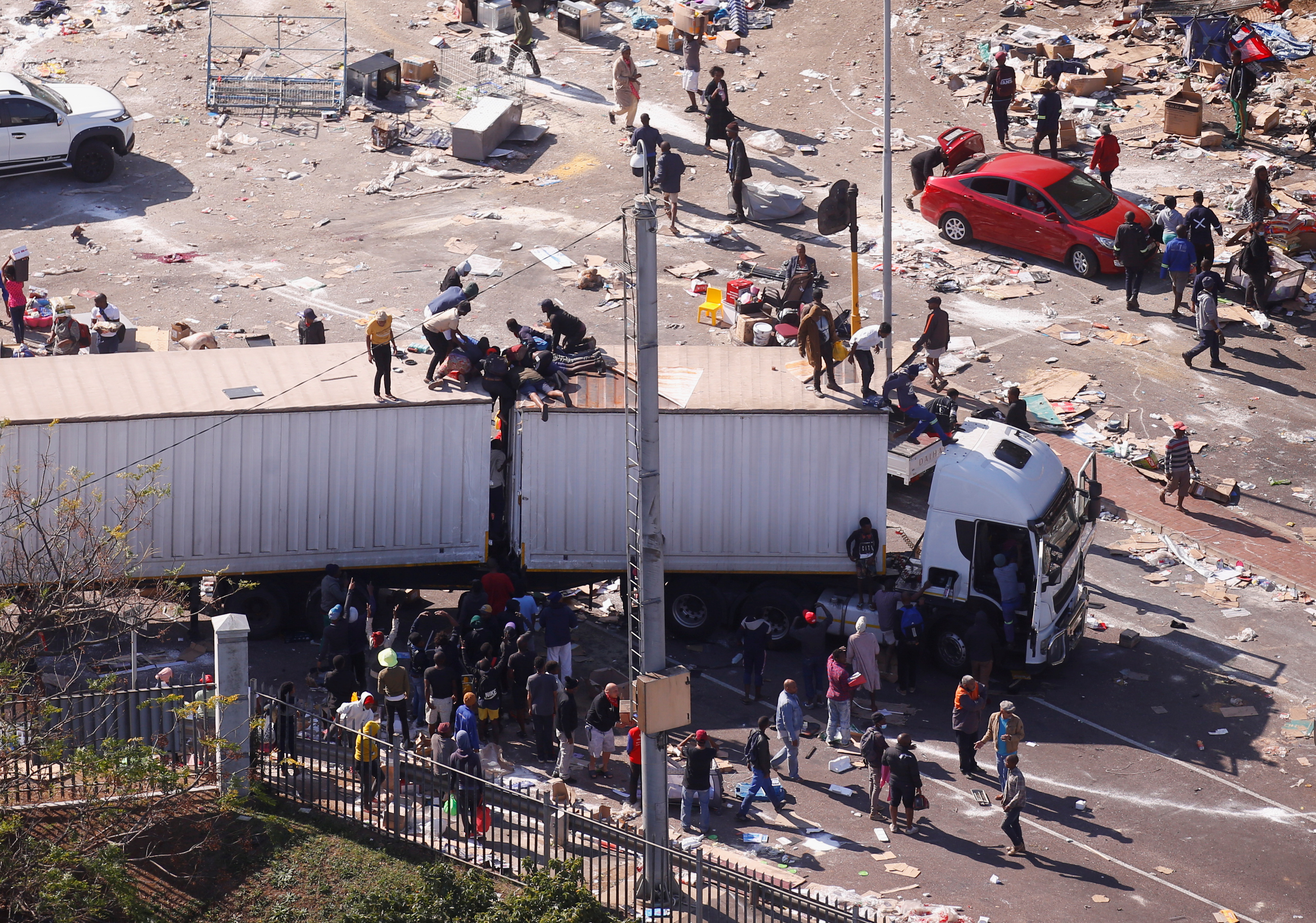