The stock market is braced for more falls this morning after British firms had £250billion wiped off their value last week amid the fallout from coronavirus.

As the first British death was confirmed, shares around the world plunged last week – triggering an alarming fall in the value of savers’ pensions and investments.

The rout knocked £4.6trillion off global shares in just one week, as markets across Europe, Asia and the US were hammered.

The FTSE 100 index of the UK’s largest companies fell another 3.2 per cent – or £54.2billion – on Friday hit the lowest level since July 2016, shortly after the Brexit referendum.

It had shed 11.1 per cent, or £206.6billion of its value, since markets opened last Monday morning. 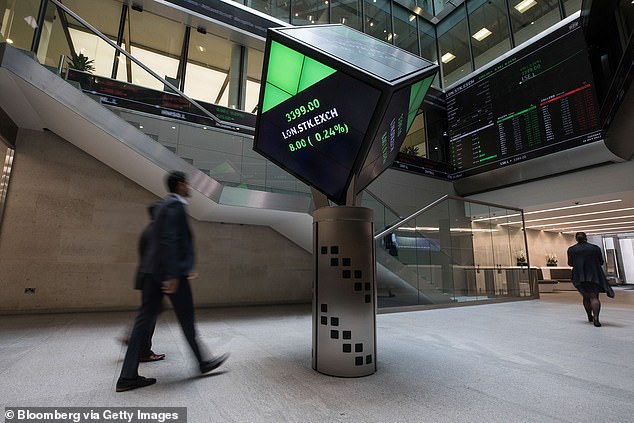 The FTSE 100 index (pictured) of the UK’s largest companies fell another 3.2 per cent – or £54.2billion – on Friday hit the lowest level since July 2016, shortly after the Brexit referendum

The weekly rout on the FTSE 100 is the third biggest on record, after the credit crunch in 2008 and the Black Wednesday crash in 1987.

The vast majority of savers will have money tied up in FTSE 100 firms, either in pensions, investment funds or stock market ISAs.

Russ Mould, of investment firm AJ Bell, described it as a ‘catastrophic day for investors’, but said the reaction of financial markets was overblown.

Emma Wall, of Hargreaves Lansdown, said: ‘The market can trigger our fight or flight instinct, but when the market has fallen, that is arguably the worst time to sell as you are selling at a less valuable price.’

She added that the ‘best thing to do would be to try to ignore it’.

Elsewhere, Japan’s Nikkei fell heavily overnight on Thursday over fears this summer’s Olympics could be cancelled.

On Wall Street, the Dow Jones suffered its biggest daily points drop on record on Thursday, and fell another 3 per cent yesterday. Global shares have also clocked up their worst week since the financial crisis, losing a tenth of their value this week.