The Importance of Being in Mayfair: Stunning Grade II listed four bedroom house on the London street where Oscar Wilde once lived goes on the market for £7.95m

A stunning Grade II-listed mansion on the London street where Oscar Wilde once lived has gone on sale for £7.95m.

The elegant house is in the exclusive cul-de-sac St James Place in Mayfair, which is where the flamboyant playwright lived for five months during 1893 and 1894.

This was one of the most important times of his career, with his play A Woman of No Importance premiering to great success in 1893 and his most popular play, The Importance of Being Earnest, premiering at the nearby St. James’ Theatre on King’s Street in 1895. 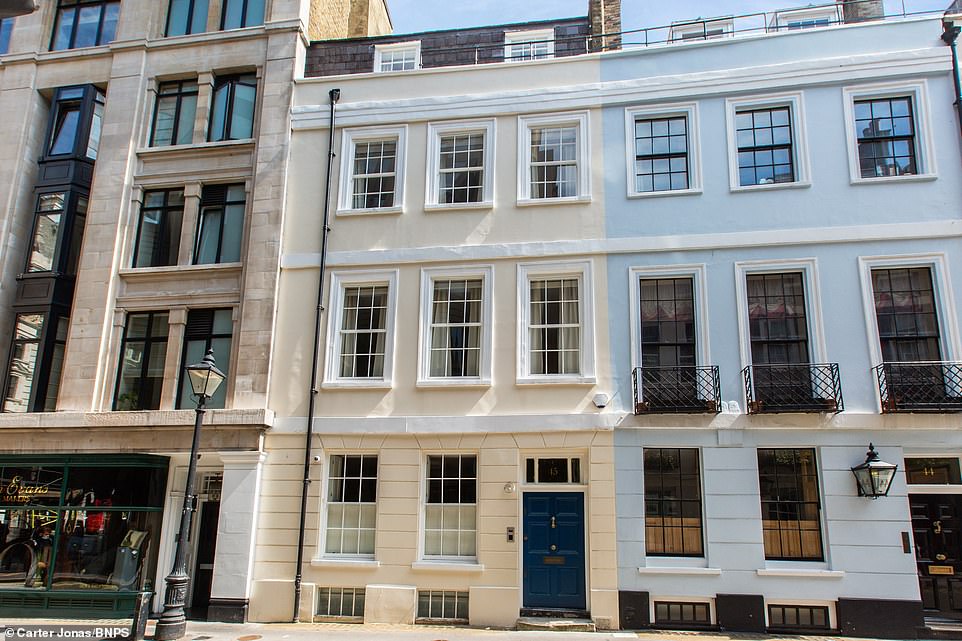 The elegant house is on St James Close, an exclusive cul-de-sac in Mayfair in London. It has been put on the market with estate agent Carter Jonas 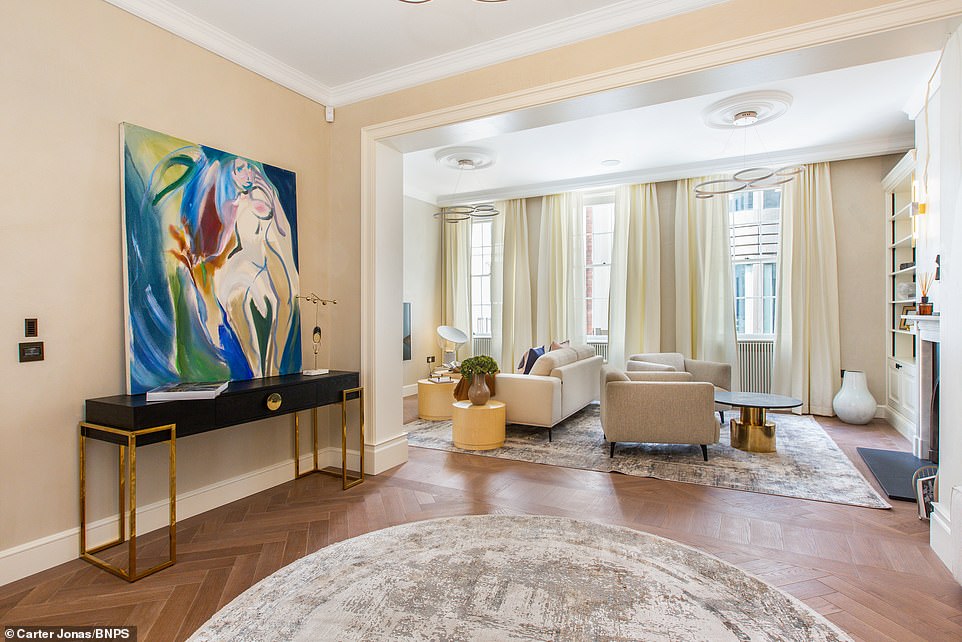 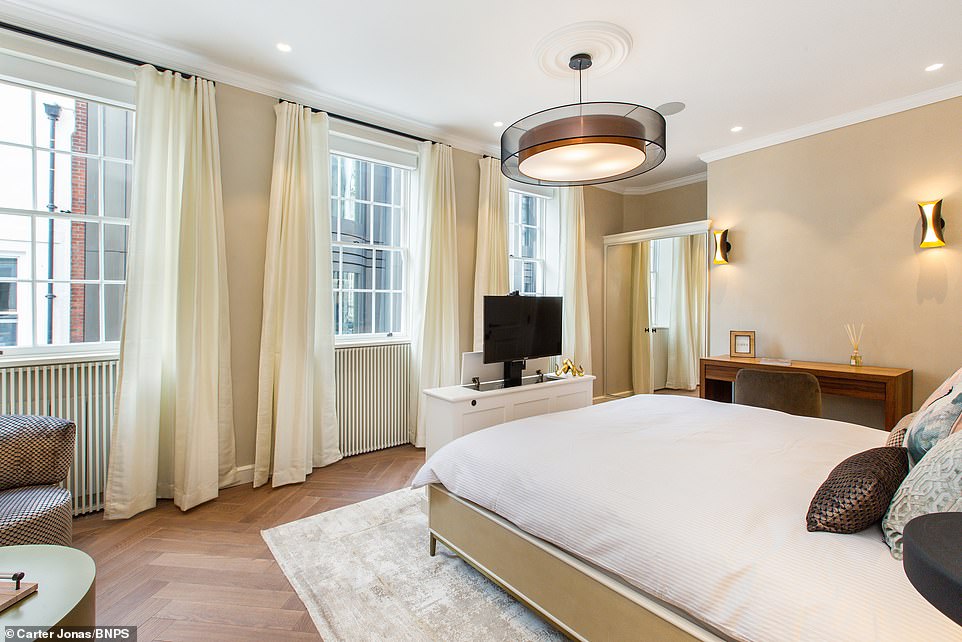 The estate agent Carter Jonas has listed the house, which dates back to the 17th century, with an asking price of £7,950,000

The elegant house dates back to the 17th century and has four bedrooms, four bathrooms and two reception rooms, with a steam room, treatment room and media room, arranged over six levels.

Visitors arrive at the ground floor which has a kitchen and a dining room with a media room leading from it.

Stairs lead to the first floor, which is given over to the reception room which has a fireplace and luxury herringbone wooden flooring. 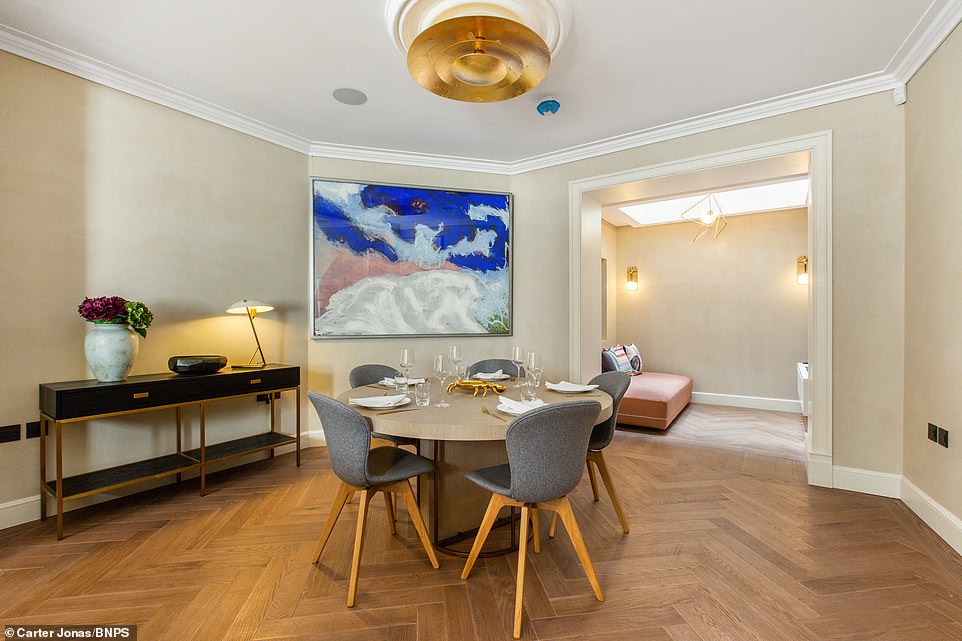 On the ground floor visitors will find a kitchen and a dining room with a media room leading from it, while there is also a reception room on the first floor 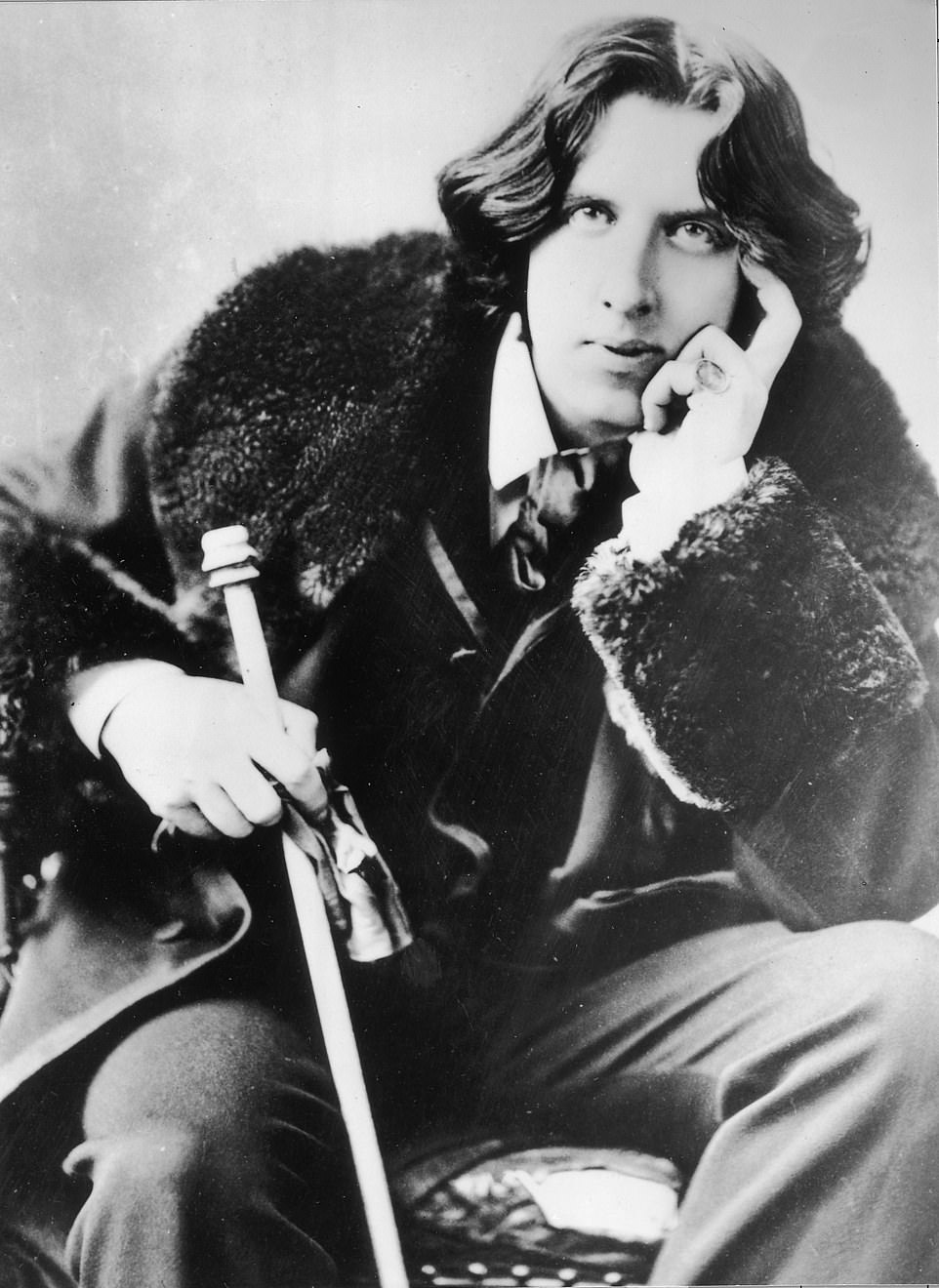 The street was home to flamboyant Irish poet and playwright Oscar Wilde (pictured) for five months in 1893 and 1894, during which he released one of his plays Woman of No Importance

The second floor has the main bedroom with a dressing room and bathroom and there are two more bedrooms and bathrooms on the third and fourth floors.

The lower ground floor has a further bedroom and bathroom, plus a steam and treatment room.

St James Place is close to some of London’s most iconic stores, including Fortnum & Mason and The Burlington Arcade, as well as Michelin starred restaurants and a number of private clubs. 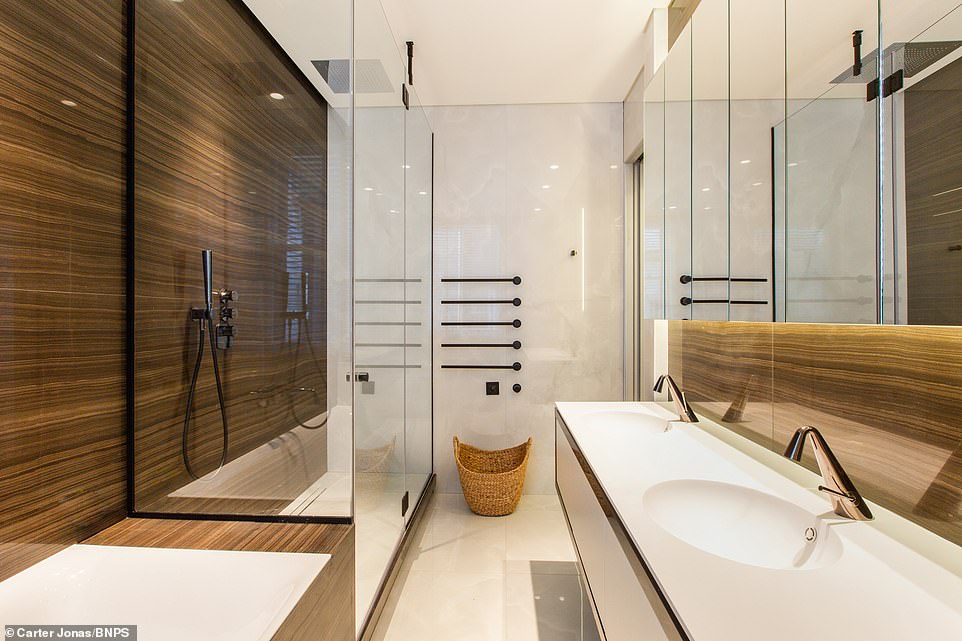 Despite the historic nature of the house it has been renovated to include modern furnishings, including this bright bathroom 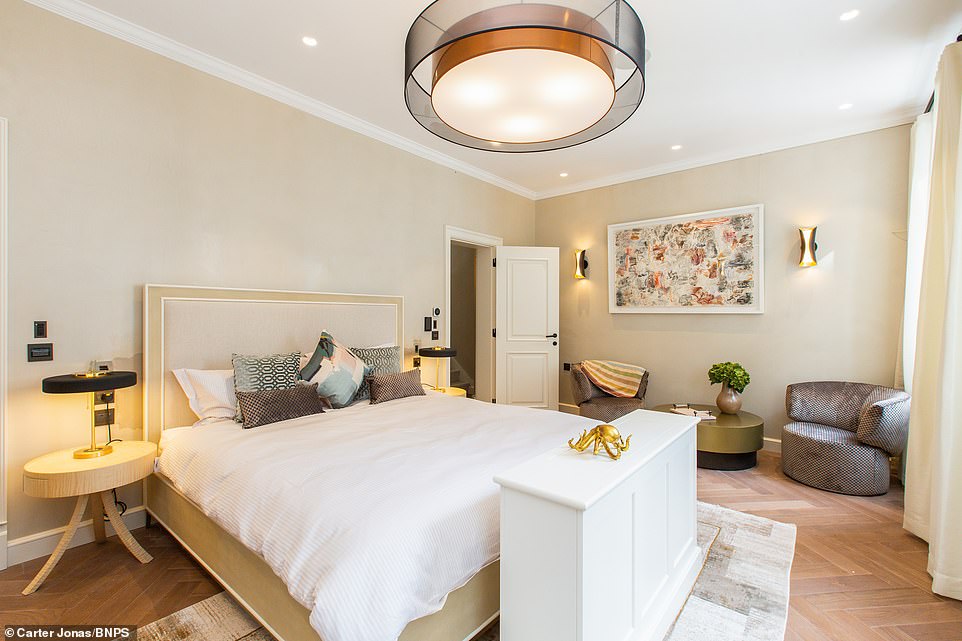 Pictured is one of the four bedrooms in the property, which is on the same road as Spencer House, home to Princess Diana’s ancestor, John Spencer

Tim Macpherson from Carter Jonas said: ‘The property is a truly stunning Mayfair residence which belonged to a London-based businessman who had to move for family reasons.

‘It’s currently rented to a tenant who fell in love with it but we think it will be sold to someone who loves this area, the closeness of Fortnum & Mason, Jermyn Street and Green Park, which you can access through a passageway at the end of the street.’ 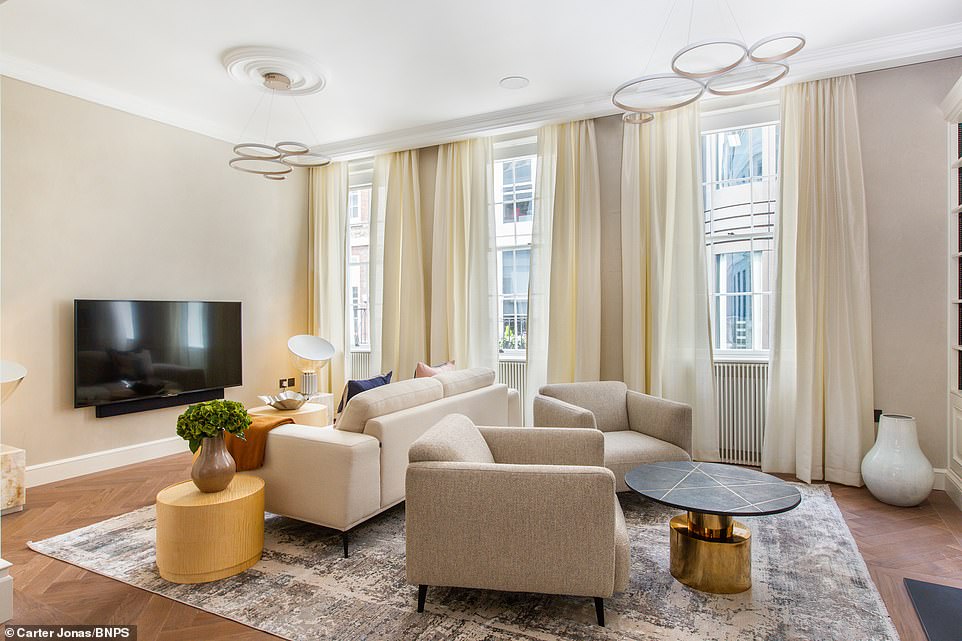 One of the reception rooms at the property. The house is within walking distance of some of London’s most iconic stores, including Fortnum & Mason and The Burlington Arcade 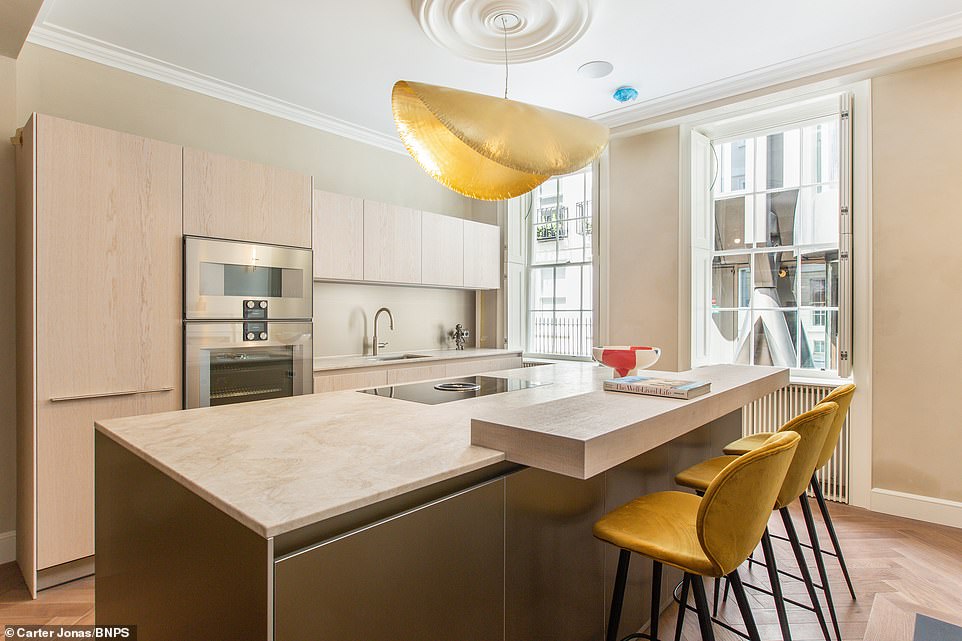 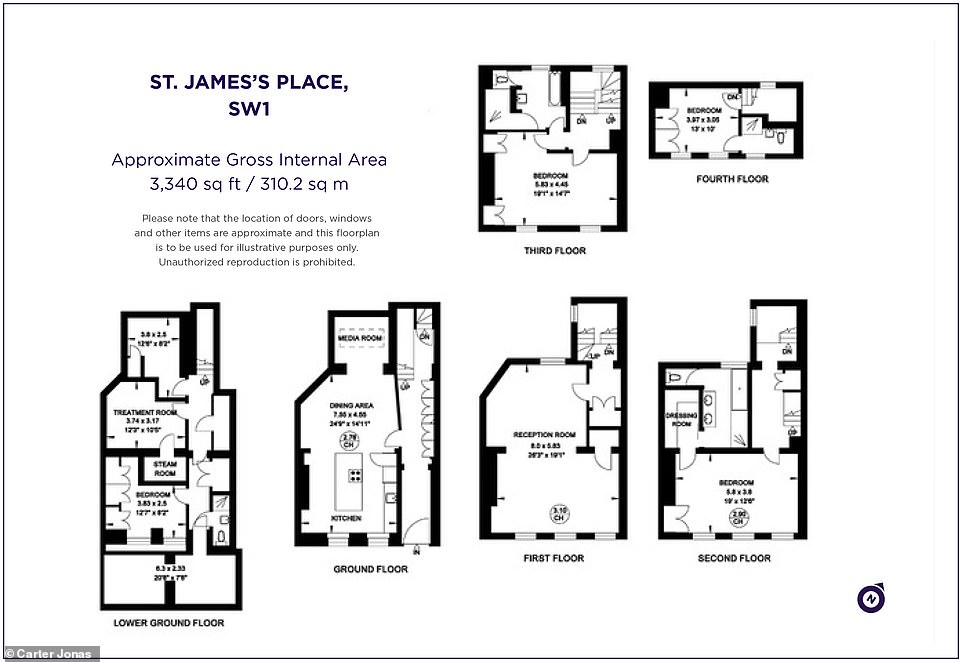 The property is split over six floors , with the top three floors each having its own bedroom and en-suite bathroom, while the bottom floor has a steam and treatment room next to one of the bedrooms 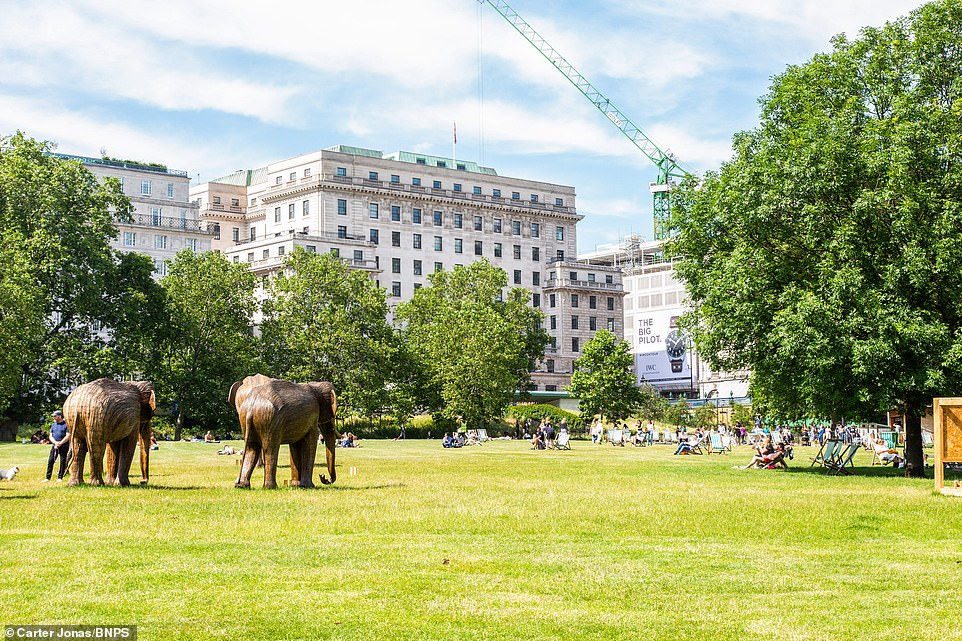 The house is a short walk away from St James’ Park and Green Park, and is in one of London’s most expensive and exclusive neighbourhoods