On Friday morning, Stephanie Bryan had her suitcases packed, ready to finally see her mother, Sylvia, who is in the final days of a lung cancer battle.

After flying to Sydney from London, she had finally received what she thought was the approval she needed to take a charter plane to Brisbane, where she would be able to visit Sylvia, 83, in hospital while she completed quarantine. 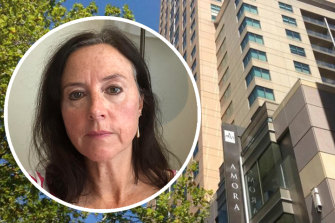 Stephanie Bryan is quarantined in Sydney’s Amora Hotel instead of visiting her dying mother in Brisbane.Credit:Suppled

By Friday evening, pictures had been published of someone in a similar predicament – Mark Kilian, the US man who travelled to Australia to see his dying father only to be denied access by Queensland – reunited with their parent at a hospital bedside.

But, that night, Ms Bryan went to bed once again in her room at Sydney’s Amora Hotel.

Like Mr Kilian, Ms Bryan, who is fully vaccinated, had received an urgent compassionate exemption from the federal government to enter Australia only to be told by the Queensland government she would need to quarantine for 14 days first.

In the ensuing confusion, during which she said it was at one point unclear if she had been cleared to fly at all, she missed her charter flight timeslot.

“Being told I could go and having the plane booked and my case packed – it was beyond cruel,” she said.

A similarly sad story is being played out in Melbourne. Anna Coffey got a call on Monday last week saying her father had suffered a serious stroke, and he was being moved into the palliative care unit of a Melbourne hospital.

Within 48 hours, the Melburnian who is fully vaccinated against COVID-19 and in New York to study was on the first plane she could get to Sydney without it costing her upwards of $10,000. 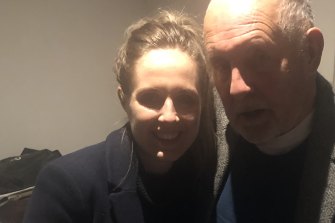 Anna Coffey and her father John, who is in a palliative care unit at a Melbourne hospital.

She figured, once she let authorities know her father John Coffey, 80, potentially had only days to live, the trip from Sydney to Melbourne would be easy – maybe take a couple of days to organise.

Instead, she’s been told by Victorian and NSW health authorities the only way she can travel to Melbourne is to charter a flight, she says at the cost of between $8000 and $10,000.

“In the past week, [my father’s] heart has stopped and they have no idea why, he’s had a stroke – at any second, he’s obviously high risk for another incident happening,” Ms Coffey said.

Prime Minister Scott Morrison has written to Ms Coffey saying he hopes a solution can be found so she can see her father. He said he hopes the Australian Health Principal Protection Committee can also find “practical solutions that balance compassion with the need to keep Australians safe”.

On Tuesday morning, NSW Health Minister Brad Hazzard said he has spoken to his Victorian counterpart regarding Ms Coffey’s situation.

Mr Hazzard said he had discussed the case with Martin Foley and they both wanted to find “some way to make it work”.

Ms Bryan, who has returned three negative PCR tests during her quarantine stay, said she was told the only way Queensland Health would facilitate a visit would be if Sylvia was moved into a COVID-19 ward, however the family believed she was too weak to leave her room.

“Even then I would not be allowed in the same room, but only be able to speak through an intercom,” she said.

“On top of that, the rest of my family would then never be allowed to visit her in that ward, so this was never going to be a viable solution.”

For a visit to take place between a quarantined returned traveller and patient in a Queensland hospital, the patient must be in a hospital which has a COVID-19 ward although visits have previously been facilitated elsewhere in the hospital.

Only four of Queensland’s public hospitals manage its coronavirus response. In the recent case of Mr Kilian, his father was moved from Robina Hospital to the Gold Coast University Hospital to facilitate the COVID-safe visit.

Ms Bryan’s mother is in a private hospital.

A Queensland Health spokeswoman referred to the department’s response to questions about the situation last week: that she could not discuss individual cases but they were considered on a case-by-case basis.

Ms Bryan has a commercial flight booked to Brisbane on Thursday, when her quarantine period ends, but worried this would be too late.

She said she “almost wished” she did not ever try to apply for an exemption, due to the stress it has caused her family during their mother’s final days.

“I still believe there is a way that could be organised to see my mother if somebody could have the human grace and gumption to do this,” she said.

Stay across the most crucial developments related to the pandemic with the Coronavirus Update. Sign up to receive the weekly newsletter.