Tens of thousands of women have taken to the streets of Europe to protest against male violence against women.

Huge crowds of protestors were seen in Munich and Rome on Saturday as marchers held up signs reading: ‘Be free from violence’ and ‘Love has no bruises.’

The marches were planned to commemorate the International Day for the Elimination of Violence against Women, which occurred on Thursday.

The day is celebrated on November 25 each year after it was first made official by the United Nations (UN) in 1999.

In Munich, Germany, signs declared: ‘A woman’s place is in the revolution’, while another said: ‘Stop violence against women.’

Meanwhile, the house of the far-right nationalist fraternity Sudetia was attacked with paint as ‘Nazis and sexists! ‘ was scribbled on the wall.

In the Italian capital, the huge march, attended by tens of thousands of supporters, was organised by the Non una di meno (Not one more) feminist movement.

One placard read: ‘Violence is structural, the root is cultural, the problem is patriarchal.’

Flares were set off in both cities while drummers and music spurred the marchers on.

Some 736 million women worldwide – almost one in three – have been subjected to intimate partner violence, non-partner sexual violence, or both at least once in their life, according to statistics from the UN.

Thousands take part in a demonstration organised by ‘Non una di meno’ feminist movement, as part of the Commemoration of the International Day for the Elimination of Violence against Women, on November 27, 2021 in Rome, Italy 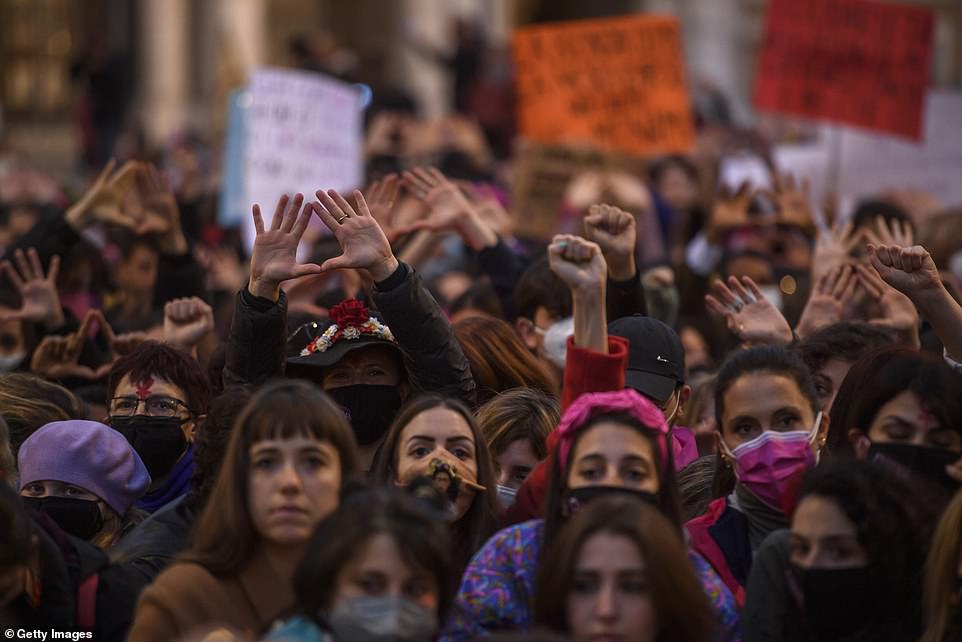 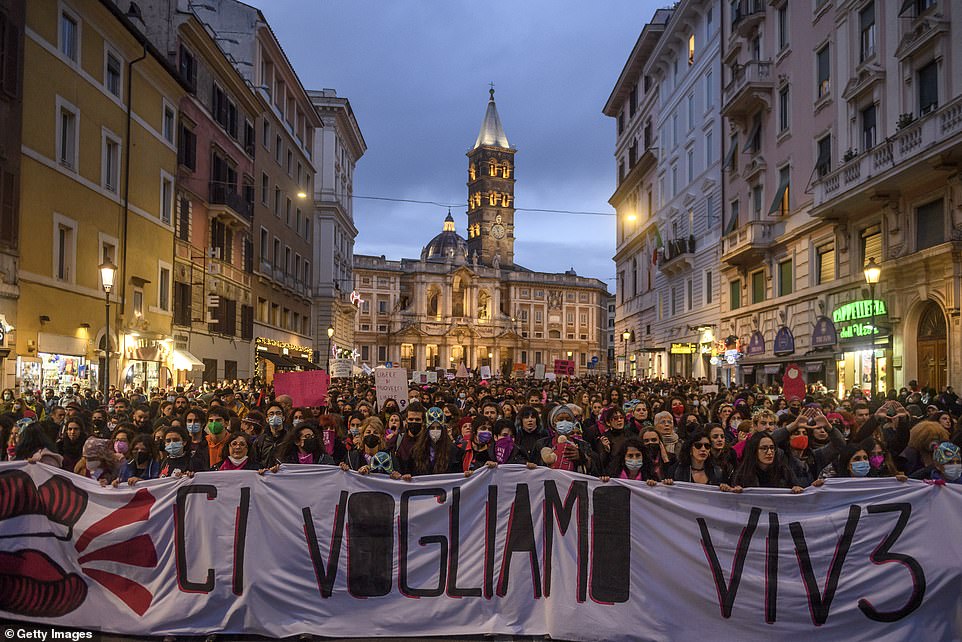 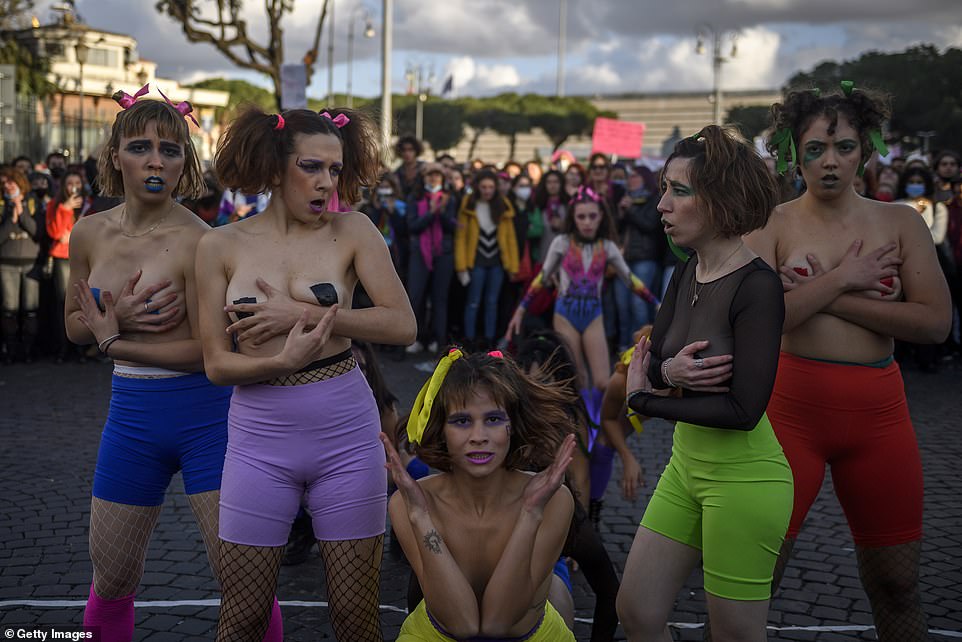 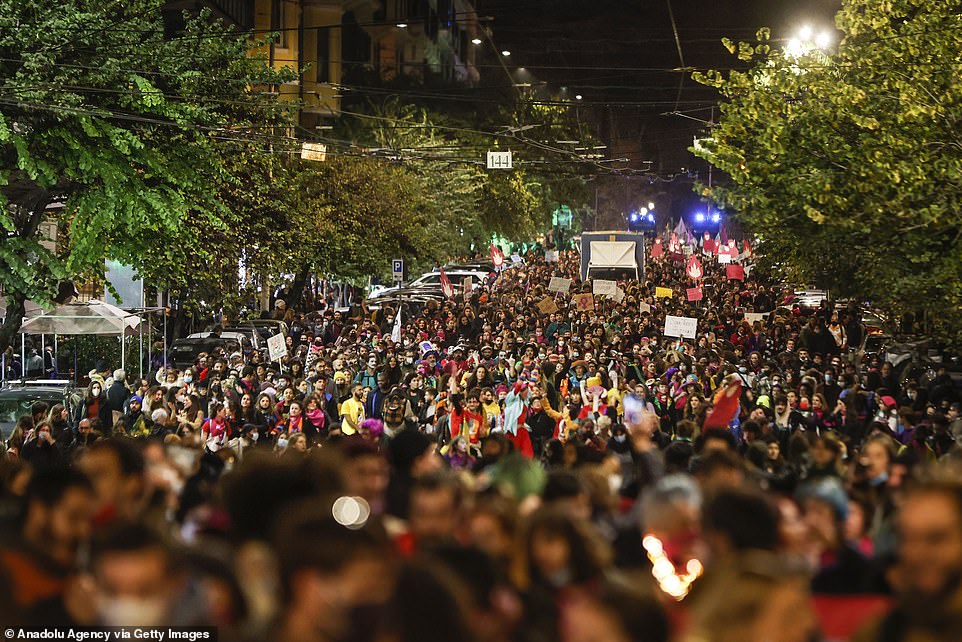 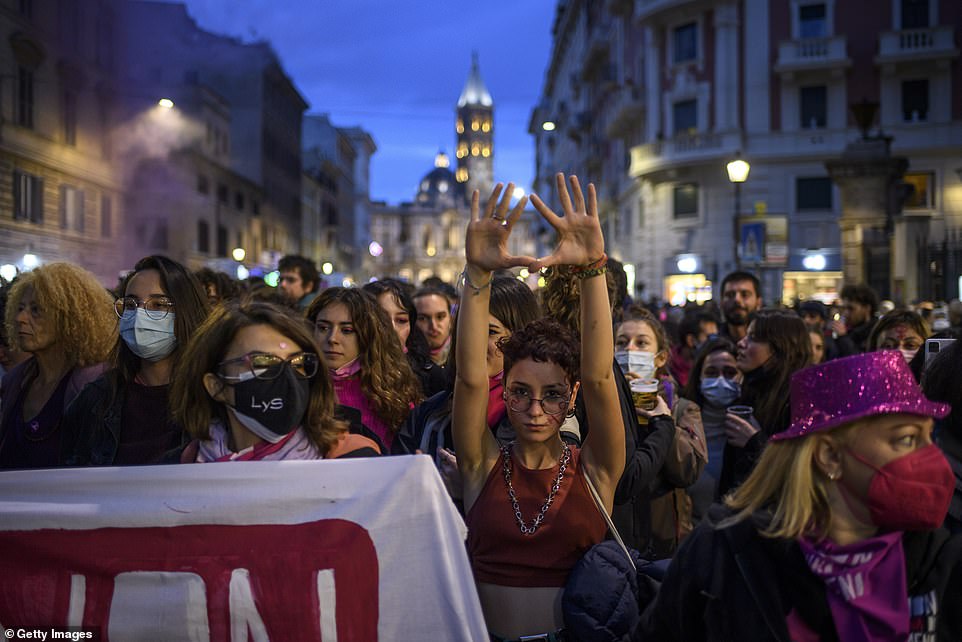 It came as hundreds of women also filled the streets of London Saturday – also in protest against rape and male violence against women.

Demonstrators held up placards and chanted slogans as they marched from near Marble Arch to Golden Square in Piccadilly Circus on Saturday night.

Anneliese Dodds, Shadow Secretary of State for Women and Equalities, joined the protestors, as she urged them to ‘shut down’ the capital in a rousing speech via a megaphone.

The women-only march was part of the annual Reclaim The Night event, which first began in 1977, at the height of the Yorkshire Ripper killings.

The event has taken on a new meaning this year following a spate of attacks on women after dark.

These include Sarah Everard, who was abducted and killed by Metropolitan Police officer Wayne Couzens, as she walked home in Clapham earlier this year.

And in September Sabina Nessa, 28, was attacked and murdered as she walked through Cator Park in Kidbrooke, in another crime which shocked the nation.

Women marching on Saturday night held up signs reading: ‘When will I be able to walk myself home?’

One said: ‘We will not be silenced’, while another read: ‘Blame the system not the victim.’