‘The Holy Land is turning into Disneyland’: Christians are being driven out of Jerusalem by hate crimes and economic hardship which will leave the site nothing more than a ‘tourist theme park’

At Easter the Little Petra guesthouse in the heart of Jerusalem’s Christian quarter should be bustling with pilgrims. Instead, the only ‘guests’ are a group of Jewish settlers who, judging by the charred double doors leading to what was the hotel’s souvenir shop, look like they checked in with cutting equipment.

But this is not just an unholy squabble over expensive real estate between Christian and Jewish communities in the old city. It’s part of what Jerusalem’s church leaders believe is an existential threat to all Christians in the cradle of the faith.

Within a generation they fear, Christian Jerusalem will be no more than a theme park for tourists, its residents and shopkeepers gone, its churches reduced to museums.

‘An exodus of Christians will turn us into Disneyland,’ says the Anglican Archbishop of the city, Hosam Naoum. ‘As Christian leaders we educate people about peace and reconciliation and living together, about sharing the beauty of the Holy Land. We expect others to do the same but today we are hearing more and more radical voices and seeing fertile grounds for groups to create a different reality in the city.

‘There is a big part of me seeing that this [a potential collapse of the Christian community] might happen because we are so small, so tiny, but we believe the Lord will provide.’ 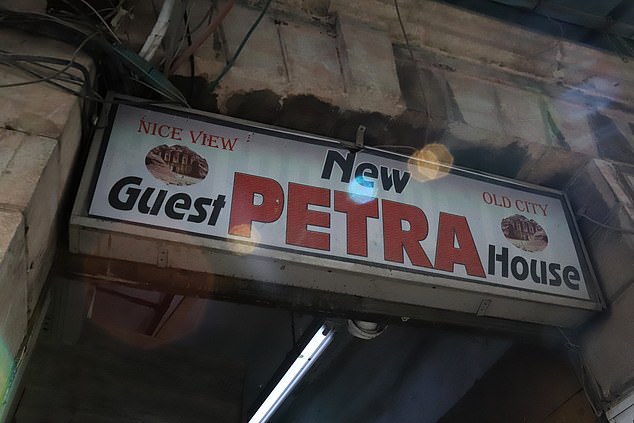 Christian leaders in Jerusalem (pictured: a guesthouse in the heart of Jerusalem’s Christian quarter) are worried their churches will turn into ‘Disneyland’ for tourists as many young Christians are leaving the city due to hate crimes and economic hardship

Christians have long been a minority in Israel but today they account for a fragile 1.9pc of the population. The younger generation, especially middle class professionals, have been driven away by economic hardship and a growing anti-Christian sentiment ranging from arson attacks on churches to the intimidation of clergy to settler incursions in the Christian quarter.

At the Benedictine Abbey of the Dormition on Mount Zion, Father Nikodemus Schnabel explains how Jewish hardliners party provocatively at his gate on Saturday nights and then toss their litter and empty vodka bottles into the abbey gardens. On his way to meet me, three people have spat at him in the space of a minute.

‘That is my reality now,’ he says, ‘it’s full of hate.’ Recently a sack of rubble was tossed over a wall into a courtyard which is used as an outdoor seating area. ‘It’s getting ugly. That could have killed someone. I am German so I can ask what would happen, in Germany, if this was done to a synagogue every week?’

At the Armenian Patriarchate the Reverend Father Koryoun Baghdasaryan explains how he and his fellow priests suffer routine abuse, since their building lies smack between the Jewish quarter and the Wailing Wall. As we exit a young Jewish cyclist pedals past and drops a gob of phlegm on his doorstep. Last year, the Father adds, two of his priests were beaten up so badly one was hospitalised.

‘These are hate crimes,’ he says, sadly. ‘People are starting to hide their crosses and other Christian symbols, it doesn’t matter if they are clergy or lay, residents or pilgrims.’ 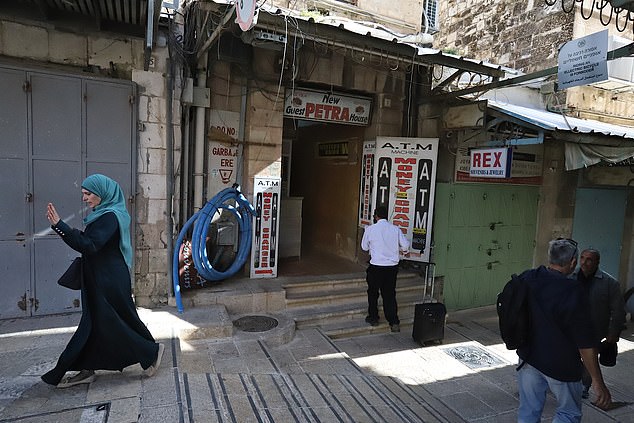 The guesthouse (pictured) would normally be busy with pilgrims this time of year, but they are nowhere to be seen

The takeover of the Little Petra at the end of last month, has raised the stakes yet further. The hostel lies in the shadow of Jerusalem’s Jaffa Gate, the great Ottoman entry to the Christian quarter. It’s been the subject of an epic legal battle between settler group Ateret Cohanim (a professional international operation run in part through shell companies in the Virgin Islands) and the Greek Orthodox Church.

In a murky deal done under a now deposed Greek Patriarch, by a church financial manager who fled to south America, a portfolio of church properties was sold in 2004. They properties were bought by Arteret Cohanim with a view to creating a strategic settler presence in the old city. One of them was the Little Petra, another was the historic Imperial Hotel. (It was from an Imperial Hotel balcony that General Edmund Allenby gave his victory address after the Battle of Jerusalem in December 1917.)

The Imperial remains – for now – in the hands of its protected tenant, hotelier Walid Dajani. In an office which smells beguilingly of cinnamon and vanilla, he shows me the 800-page eviction notice on his desk. It runs contrary to the deal his father made in 1949 securing the right to run the hotel for three generations of the Dajani family. He is fighting to stay but is under intense financial and emotional strain.

‘I feel that 50 years from now there will be no Christians on Jaffa Gate, no Christians in Jerusalem. If this hotel goes, 15 shops will go in no time too. They (Ateret Cohanim) have an army [of settlers] and money, as much as you want. They are trying to Judaise Jaffa Gate stone by stone.’ 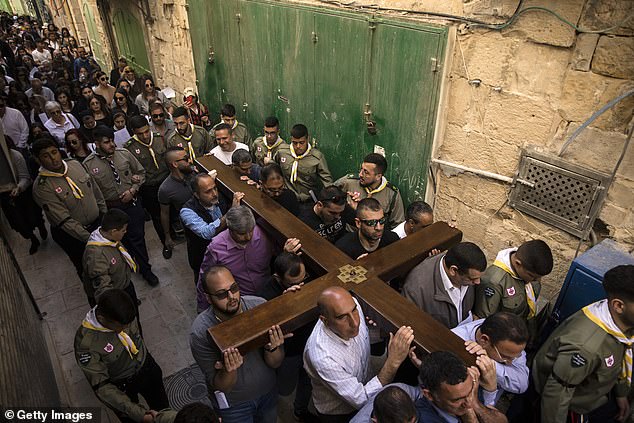 He worries about impact this would have on the religious processions which start at Jaffa Gate, part of the traditional Christian calendar, and on the sanctity of the Church of the Holy Sepulchre nearby. The church is the site of both Calvary where Christ was crucified, and the tomb in which he was buried and resurrected. It is one of the centres of the Christian world.

Beyond the narrow context of the legal tussle over these property – which Arteret Cohanim is currently winning – there is a broader assault on the Christian faith here. As well as Christian clergy being abused, there was an arson attack on the Church of all Nations in Gethsemane in 2020 (Gethsemane is the garden where Christ was arrested the night before his Crucifixion), and there has been repeated vandalism of Christian gravestones, statuary and stained glass windows elsewhere.

There’s also a now controversial plan to expand an Israeli national park onto church-owned land, including a section of the Mount of Olives. ‘A pincer movement,’ as it was described to me by a Jerusalem attorney who declined to be named.

What’s striking is that while Jerusalem’s Christian leaders could hardly be more different, their perception of the threat to their faith is the same.

His Beatitude Patriarch Theophilos III sitting in the chandelier-ed and gilded splendour of the Greek Patriarchy, is the most senior member of the city’s clergy. He’s a cheerful host – trays of shot glasses, chocolates and coffees appear – but the septuagenarian is desperately worried about his dwindling flock. ‘We have survived much throughout the ages. We are the church of resurrection after all,’ he smiles. ‘But the settlers, they are working day and night.’

She says: ‘People think ‘why should I put up with this when I can go to the USA or Europe and have a life. When I first got here you could go to Jaffa Gate and Christmas trees were free for Christians. That doesn’t happen any more.

You used to have Christmas decorations there too, now we only see menorahs. [The seven branched Jewish candle.] This isn’t about one family moving in, this is about changing the nature of the neighbourhood. Completely. It’s systematic, taking it over bit by bit by bit.’

She is just about to leave Jerusalem to become chaplain at Harvard University in her native America, so she can afford to speak her mind. ‘What’s the thing about putting a frog in boiling water and it not realising the danger until it is too late? Jerusalem without Christian culture? It’d be a museum of Christianity, that’s all.’

The Revered Ballenger describes going on what she calls ‘a patriarchal pub crawl,’ where church leaders visit each other’s patriarchates to pay their respects. Once this act of unity was just good manners. Now it’s matter of necessity as they fear they are fighting for their survival.

They were backed by the Archbishop of Canterbury The Most Reverend Justin Welby who spoke of the diminishing Christian community in the Holy Land as a ‘historic tragedy unfolding in real time’. 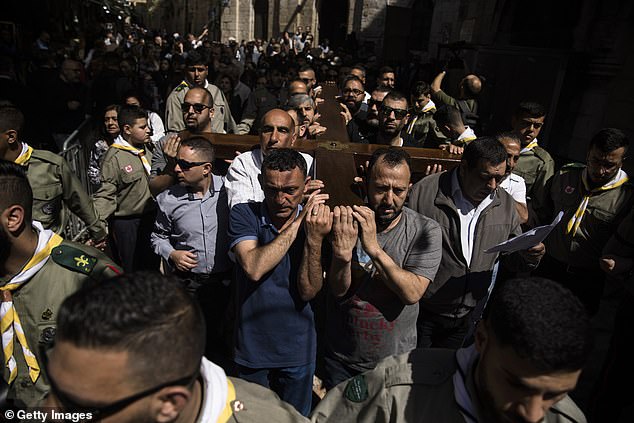 The overlapping religious holidays Ramadan for Muslims, Passover for Jews and Easter for Christians in Jerusalem has increased tensions around contested sacred sites

His intercession did not please the Israeli government which, without specifically naming the Archbishop, warned: ‘Religious leaders have a critical role to play in education for tolerance and coexistence, and Church leaders should be expected to understand their responsibility and the consequences of what they have published, which could lead to violence and bring harm to innocent people’.

But the churches are not backing down and the Greek patriarchy is set to return to court in June for another battle with Ateret Cohanim over the disputed property deal. The church says it has enough new evidence from a whistleblower for the previous verdict in favour of the settlers to be overturned, and for there to be a retrial.

‘If the court does not find in favour of justice, in favour of the Patriarchy, then I think that will be the beginning of even darker times,’ warns Archbishop Hosam.

And Israel has just endured a very dark month indeed. The once in a decade convergence of western Easter, Orthodox Easter (celebrated next weekend), the Muslim holy month of Ramadan and the Jewish festival of Passover has proved turbulent. Fourteen people have died in terror attacks in Israel since the end of March and Good Friday saw 150 Palestinians injured in clashes with the Israeli police at the al-Aqsa Mosque in Jerusalem.

The settlers locked inside Little Petra did not wish to speak, directing all calls to Ateret Cohanim chairman Mati Dan who lives in another former church building, St John’s Hospice, where now Israeli flags hang on each side of the double doors. He didn’t respond to requests to talk. Historically however, Ateret Cohanim say they operate legitimately, even as they move to re-arrange the four familiar quarters of the old city.

Some things in Jerusalem have not changed – yet. Deep inside the market, a baker is making flat breads which glisten with olive oil and give off the aroma of Za’atar. You can eat them warm and fragrant as you walk along stones dating from the time of Jesus, and feel the solidity of the history under your feet.

The future however, is far less certain. ‘You can have hope without optimism,’ says Carrie Ballinger, ‘and that’s what we’re practising here

For more information go to www.protectingholylandchristians.org