Hundreds of Britain’s arts venues forced to close during the coronavirus crackdown may never re-open, it was claimed last night.

Cinemas, galleries and West End theatres yesterday announced they will shut their doors after Boris Johnson told the nation to avoid public venues.

Among the biggest names were the Tate galleries – closed until May – the National Gallery and the Royal Albert Hall, while cinema chains including Odeon, Cineworld, Vue and Picturehouse also shut down. 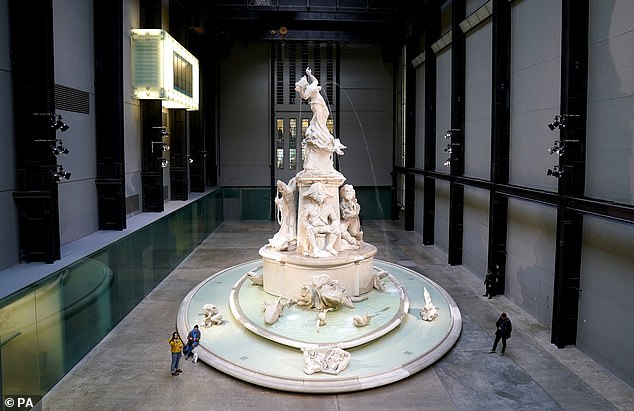 The Fons Americanus water fountain is mostly deserted in the Tate Modern’s Turbine Room on Tuesday after Boris Johnson advised people to stay away from public places. Both Tate galleries are now expected to stay shut until May 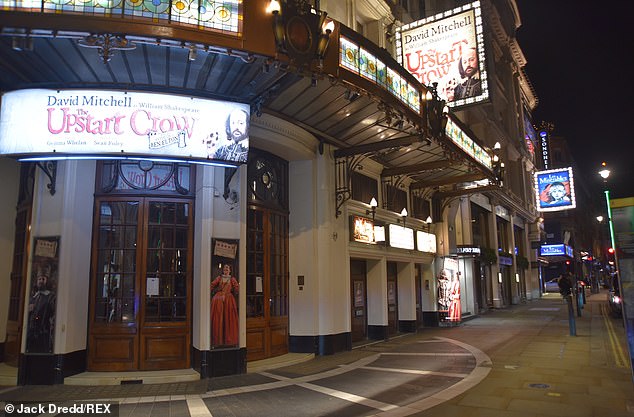 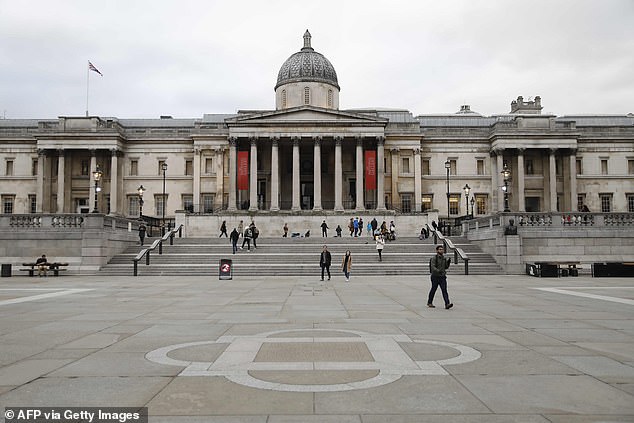 Trafalgar Square looked empty on Tuesday as the public’s avoided travelling to London. The National Gallery is following suit with other venues and will close its doors on Wednesday until further notice

The British Museum, Victoria and Albert and the Natural History Museum also announced closures, as did the Science Museum Group, which has branches in Manchester, Bradford, York and Shildon, County Durham, as well as London’s Science Museum.

Mary Archer, the group’s chairman, said the decision was not an easy one, but added: ‘As a scientist, I know that closing our museums is the right thing to do for both our visitors, our staff and our volunteers at this stage in the Covid-19 outbreak.’

Lady Archer said the gravity of the situation was brought home to her earlier this month when one trustee, Professor Ajit Lalvani, who is a distinguished infectious disease scientist, tested positive for the virus. She added that he is making a good recovery.

Meanwhile the Society Of London Theatre, which represents hundreds of theatres, and UK Theatre said the decision to shut down premises was ‘not taken lightly’. Roughly 290,000 people work in the theatre industry, many who are self-employed and now without an income. 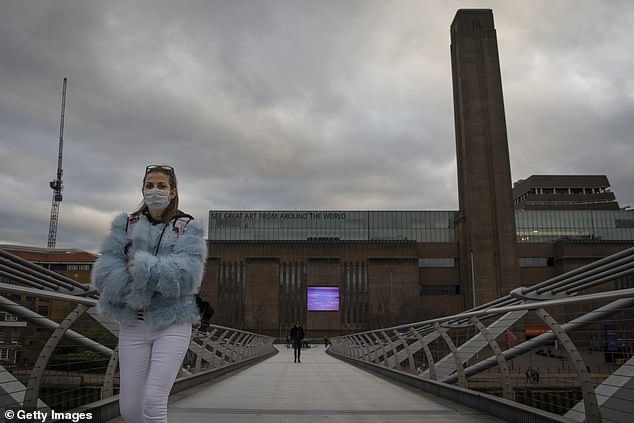 A woman wears a facemask to protect from coronavirus as she crosses the Millennium Bridge, near the Tate Modern on Tuesday. Museums, galleries and venues are all closing in light of the global pandemic

Naomi Pohl, of the Musicians’ Union, warned some performers could end up being made homeless and added ‘hundreds of venues, theatres and grass roots music venues and comedy clubs above pubs’ may never re-open.

As the Tate Modern put the brakes on its new major Andy Warhol retrospective, London’s Saatchi gallery, which is showing a Tutankhamun exhibition, pledged to stay open and step up frequency of cleaning.

The National Gallery, which hopes to re-open on May 4, said: ‘We have been open to the public for almost 200 years… so we are all upset about this closure, but it is the right thing to do.’

Bafta announced it will postpone its Television Awards, scheduled for May 17, while the Olivier Awards have been cancelled.

In the new Medicine Galleries in London’s Science Museum, there is a large display on infectious diseases, including malaria, TB, polio and influenza.

When this coronavirus outbreak finally comes to an end, I suspect we’re going to have to add a new window – on COVID-19. 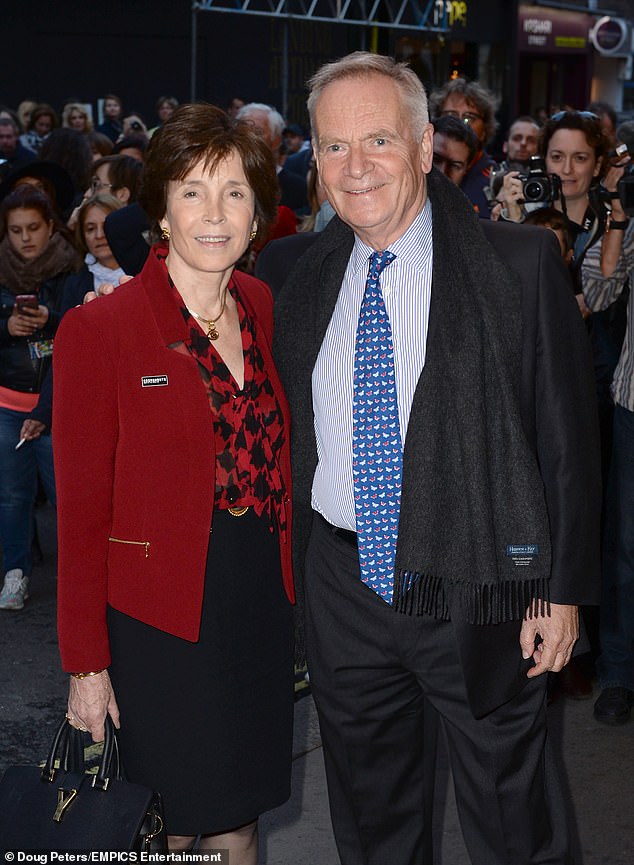 Mary Archer with husband Jeffery Archer at the Noel Coward Theatre, London, in 2016. Lady Archer says the world must ‘go to war’ against the coronavirus pandemic, which led to her to close science museums across the country

It was our painful duty this week to close all five of them.

It’s not a decision we have taken lightly because we are used to opening every day to show the wonders of science, engineering, technology to over five million of people every year.

But, as a scientist, I know that closing our museums is the right thing to do for both our visitors, our staff and our volunteers at this stage in the Covid-19 outbreak.

After all, the number of infected people is increasing rapidly. As of March 16, there have been 164,837 cases and 6,470 deaths confirmed worldwide. Global spread has been rapid, with 146 countries now having reported at least one case.

And we are not alone, of course, in having to choose between the importance of keeping the wonders of our scientific, cultural and artistic heritage accessible to everyone and the duty of care we owe our staff and visitors.

Yesterday Tate announced that all four of its galleries, including Tate Britain and Tate Modern, will be closed until at least May 1 and other big-name museums such as the Natural History Museum, The National Portrait Gallery, and the Ashmolean in Oxford will also be off-limits.

Meanwhile, all V&A sites will also be closed as of Wednesday, including its main gallery in South Kensington, the Museum of Childhood, Blythe House and the V&A Dundee, and the National Gallery will close on Thursday.

The gravity of the situation was brought home to me personally earlier this month when one of my SMG trustees, Professor Ajit Lalvani, tested positive for Covid-19.

Fortunately, he is making a good recovery. But his position is all the more poignant because he is – ironically – one of the most distinguished infectious disease scientists in the world.

In hospitals such as Cambridge University Hospitals – where I was once chair of the NHS Foundation Trust – they are emptying beds as far as is possible to cope with the coming influx of people who need hospital treatment or intensive care, while doing all they can to protect their staff.

My husband Jeffrey is now nearly 80, and I’m no spring chicken, so we are both in the high-risk group and self-isolating as far as is practical.

This may feel like you’re in a science fiction movie, but this is for real. The world must go to war against this virus.