Thousands marched in Bosnia on Saturday to protest against a Mass being held to honour Croatia’s Nazi collaborators and civilians killed after World War II.

The annual service, usually held in Austria at the site of the Croatian regime’s last stand, was moved to Sarajevo because of coronavirus restrictions in Austria.

Croatian groups gather each year for the commemorations, co-organised by the Catholic Church in Bosnia and Croatia, often brandishing Nazi memorabilia.

The Nazi-hunting Simon Wiesenthal Center urged the Bosnian government to ban the Mass, labelling it a ‘travesty of memory and justice’.

The service provoked outrage from most political parties, Jewish leaders, the Serbian Orthodox Church and anti-fascist NGOs, who held a march during the Mass in central Sarajevo. 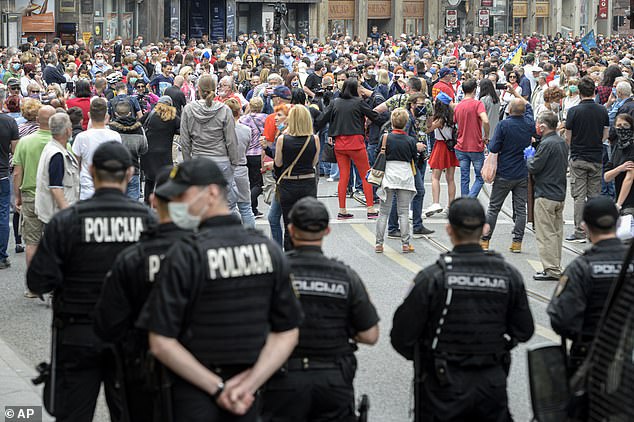 People attend an anti-Nazi protest outside the Sacred Heart Cathedral in Sarajevo, Bosnia on May 16. Protesters gathered despite the nation’s ban on mass gatherings to show their anger 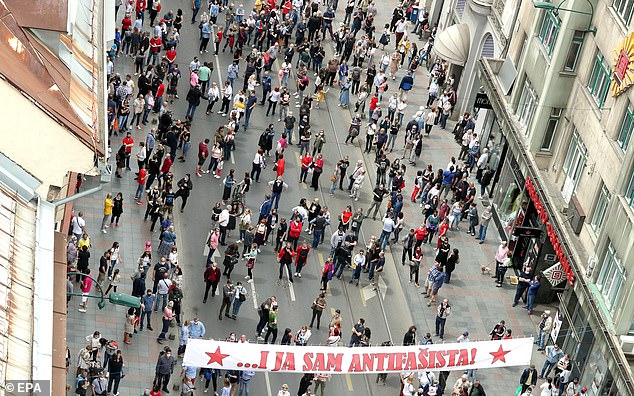 ‘In Sarajevo, a multi-ethnic and anti-fascist city, there is no room for fascism,’ local Jewish leader Boris Kozemjakin, who took part in the march, told AFP.

Sarajevo Archbishop Vinko Puljic, who held the Mass in the Bosnian capital’s cathedral, earlier rejected the accusations and said praying for victims’ souls did not mean approval of their acts.

‘No one has the right to neglect the victims for whom we pray today,’ Puljic said during the Mass.

‘We want that double standards in respecting the victims of hatred and massacre be stopped.’

Meanwhile, the marchers, who rallied despite a ban on public gatherings during the coronavirus pandemic, sang songs linked to the anti-Nazi struggle.

‘Death to Fascism, Freedom to People!’ they chanted.

Above a monument with names of 55 people from Sarajevo killed by the Croatian fascist regime known as Ustasha, the organisers of the march placed a large photo showing the hanged victims.

Also large banners reading ‘I’m an anti-fascist too’ were placed at the main Titova street. 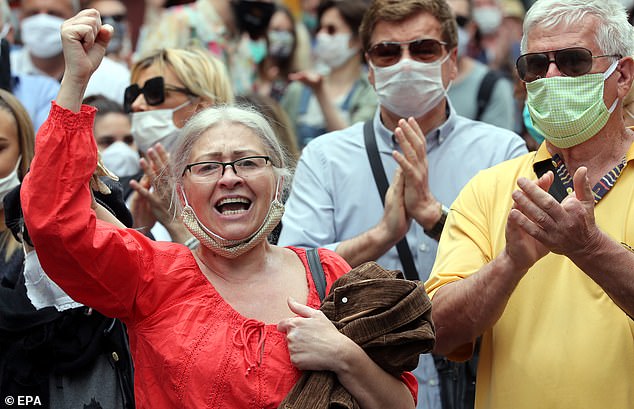 According to the cathedral’s archdiocese, only 20 people were likely to attend the service, but protesters turned up in their thousands to rally against it being held 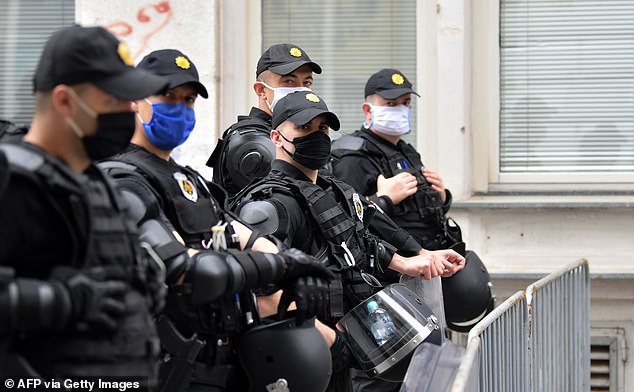 The service was held under tight security and police sealed all roads leading to the cathedral with metal fences.

What is the Ustasha annual Mass?

The Ustasha were a Croatian fascist, ultra-nationalist and terrorist organisation, active between 1929 and 1945.

Its members murdered hundreds of thousands of Serbs, Jews and Roma, as well as Yugoslavian dissidents during World War II, and became infamous for their particularly brutal methods of execution.

In what is seen as the final battle of World War II on European soil, many of the Croatian Nazi-allied soldiers and civilians were killed in the battled of Poljana, a town in Slovenia, near the Austrian border.

The battle ran from May 14 to May 15 in 1945, before the Ustasha were defeated. Many of the survivors surrendered and or were captured in Bleiburg, Austria.

Others disappeared, going underground and fleeing to other countries, notably Argentina, with the help of the Roman Catholic church.

To this day, a large annual event, sponsored by the Croatian parliament, is usually held in Bleiburg to commemorate tho Ustasha who died, 75 years ago.

Every year, thousands travel to Bleiburg for the Mass, which has been described as the  largest neo-Nazi congregation in Europe.

Catholic officials in Croatia and Austria are reportedly split over the event.

This year, due to the coronavirus, Austria could not host the Mass, so it was moved to Sarajevo, the capital of Bosnia, resulting in the protests.

Only about 20 people attended the service which, like the march, ended without incident.

The Mass, originally announced as the service for those killed at Bleiburg, was eventually presented as the one for ‘all war and post-war victims’.

The Ustasha persecuted and killed hundreds of thousands of Serbs, Jews and anti-fascist Croatians.

At the time, the so-called Independent State of Croatia (NDH) included Bosnia and parts of Serbia.

More than 10,000 Sarajevo residents – mostly Jews but also Serbs and Roma – were killed by the Ustasha regime during WWII.

Near the end of the war, the Ustasha, accompanied by civilians and Slovenian and Serbian collaborators, started to flee towards Austria hoping to surrender to British forces.

But the British refused their surrender.

The Ustasha were caught and executed by Josip Broz Tito’s partisans in the border region between Austria and Slovenia.

Croatian conservative Prime Minister Andrej Plenkovic said earlier that 75 years on ‘we remember a difficult chapter of Croatia’s history and we remember all the victims’.

The number of those killed in the Bleiburg area – where the commemorations are usually held – is still debated but independent historians put it at tens of thousands.

Short memorial ceremonies for the victims were also held in Croatia. 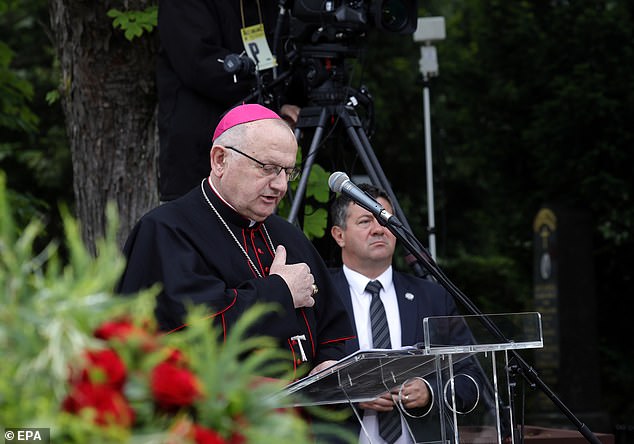