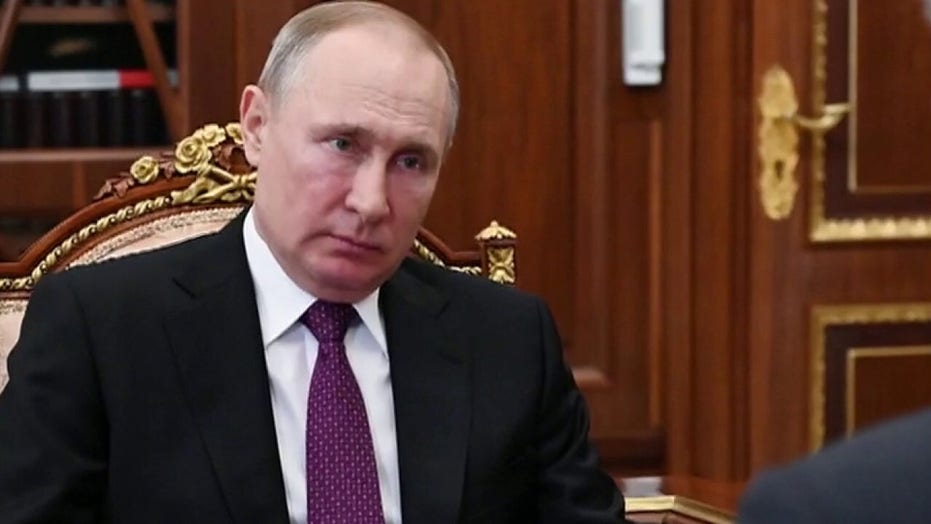 Gen. Keane lays out Russia’s ‘huge problems’ as Putin remains in power until 2036

Tens of thousands of Russians took to the streets to protest the arrest of a regional governor, demanding both his release and President Vladimir Putin’s resignation, according to reports.

Sergei Furgal, the governor of Khabarovsk, is a member of the Liberal Democratic Party, having defeated a candidate of Putin’s own United Russia party. Just days after Putin won a landslide ballot on constitutional reforms, Furgal was arrested on suspicion of multiple murders, according to the Moscow Times.

The alleged murders occurred between 2004-2005 in the Khabarovsk territory, resulting in the deaths of several businessmen while Furgal was himself involved in the timber and scrap metal trade.

TRUMP CONFIRMS HE OK'D US CYBERATTACK AGAINST RUSSIA IN 2018: REPORT

“The very fact that they could not find anything more fresh to accuse him of is a clear signal that this is an act of political repression,” Nikolai Petrov, a political analyst, told the New York Times in a telephone interview. “They are telling local elites that if they can arrest a sitting governor for crimes going back 15 or 20 years then they can arrest anyone.”

Furgal was flown to Moscow immediately after his arrest and appeared in court, where he pleaded not guilty to charges. He has been remanded in custody until Sept. 9, the Times reported. 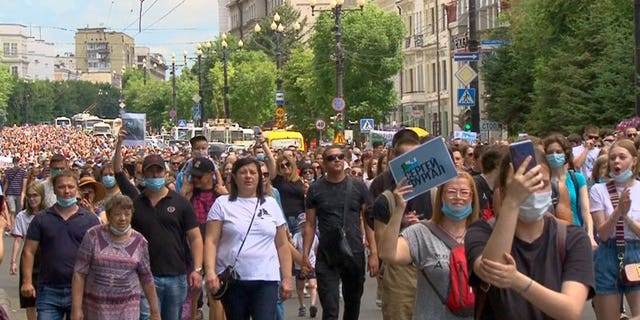 In this video grab taken from the Associated Press Television footage, people attend a protest in support of Sergei Furgal, the governor of the Khabarovsk region, who was arrested in Khabarovsk Thursday and flown to Moscow for interrogation, in Khabarovsk, Russia, Saturday, July 11, 2020. A court in Moscow ruled Friday to jail a provincial governor pending a probe on charges of his involvement in multiple murders. The arrest of Furgal, who has remained widely popular in his region, has stoked broad discontent, with a petition protesting his arrest quickly getting more than 37,000 signatures and residents of Khabarovsk staging pickets in his support.
(AP Photo)

Demonstrators took to the streets by the thousands, chanting anti-Putin slogans. As many as 35,000 people may have been protesting, according to the Associated Press.

Khabarovsk lies 4,000 miles to the east of Moscow, making it difficult for the Kremlin to actually discredit the protests and disperse them. The Moscow Times reported the local government denounced the “provocative slogans” and urged people to show “common sense,” using the coronavirus ban on gatherings to try and disperse the protests.

Such slogans include “Freedom for Furgal,” “Moscow get out” and “Putin Step down,” video of the protests shows.

While Furgal has been long accused of criminality, protesters say they are more concerned that his crimes, ignored for almost two decades, have suddenly been used to remove the governor – a leader that they say won a “real” election compared with Putin.

Aleksei A. Navalny, a Moscow-based anti-corruption campaigner and Russia’s most prominent opposition leader, tweeted a video of the protests along with the message “Far East, We Are with You!”

State-controlled media has attempted to ignore the protests, instead focusing on problems in the United States. Dimitri Alekseyev, a wealthy businessman in Khabarovsk, commented on Facebook that “it seems I am living in the U.S.A.”