I’m off! Giant tortoise climbs over boulders surrounding enclosure and makes a (very slow) break for freedom after visitors return to Twycross Zoo

A tortoise showed it had had enough of visitors returning to the zoo following the coronavirus lockdown when it tried to make a run for it.

Footage shows the tortoise climbing out of its enclosure at Twycross Zoo in Little Orton, Leicestershire, yesterday.

The Aldabra tortoise got out of its pen and walked into a crowd of children on the other side in the video uploaded to social media.

The zoo reopened to the public on June 15 with limits on the number of visitors to ensure safe social distancing and only pre-booked tickets allowed. 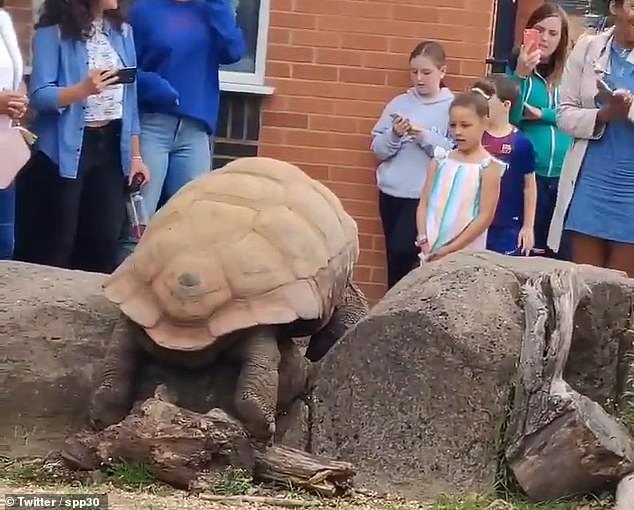 A giant tortoise tries to escape from its enclosure by climbing over a boulder at Twycross Zoo in Little Orton, Leicestershire 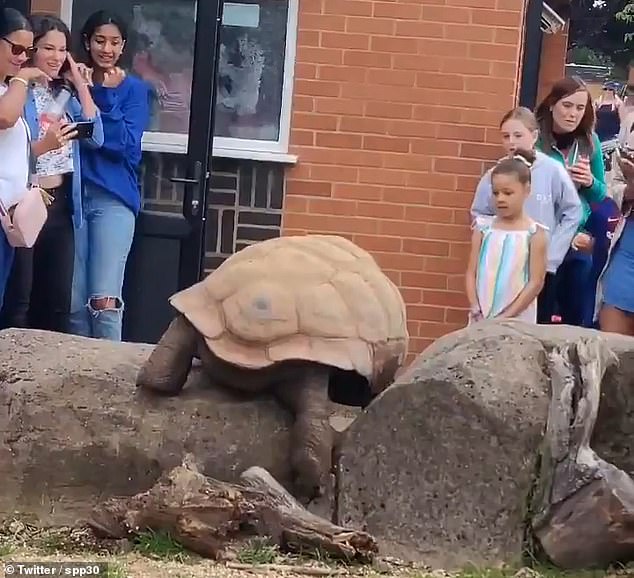 In the video, the turtle starts to climb a boulder at the edge of its enclosure as a woman says: ‘He is trying to run for it.’

Crowds standing n the other side of the boulder lean in to take pictures of the tortoise.

The woman says: ‘He’s trying to get out.’

Three girls standing by the boulder cower away as the tortoise gets to the top of the boulder and lowers itself to freedom on the other side.

It begins to walk into the crowd and the woman says: ‘It’s escaped. Just be careful please, be gentle.’ 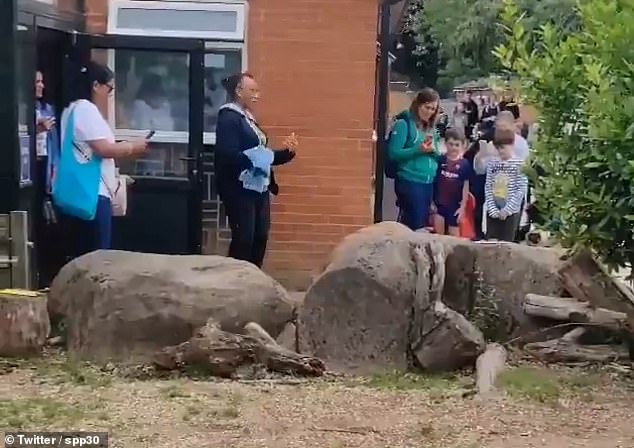 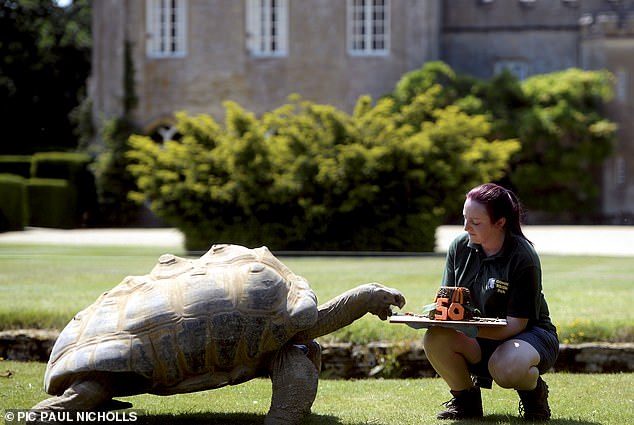 The escaped animal was an Aldabra tortoise, one of five species of tortoise living at Twycross zoo. Pictured: George the 85-year-old Aldabra Giant Tortoise, being served 50th Anniversary cake by Roxy Newton, keeper at the Cotswold Wildlife Park near Burford in Oxfordshire on June 23

The video taker uploaded the footage to social media with the caption: ‘This tortoise has had enough of lockdown too.’

Aldabra tortoises, one of five species of tortoise living at Twycross zoo, can grow to between 330 and 550 lb and live for more than 150 years.

The zoo has come under fire since its reopening, with some customers claiming they did not feel safe due to crowding on review site Trip Advisor.

Lauren Moody called the zoo a ‘social distancing hell’ on Twitter after her visit on Sunday. 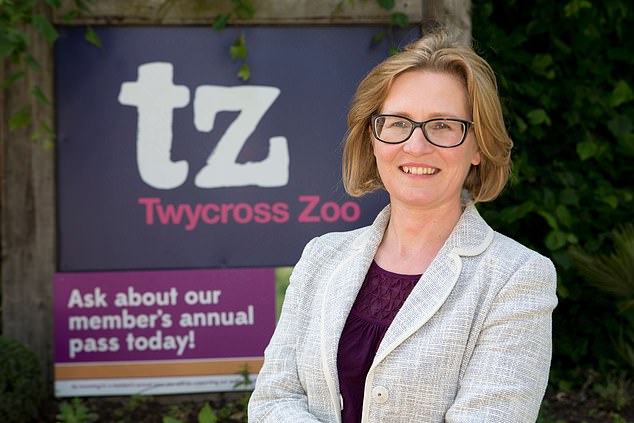 Dr Sharon Redrobe, chief executive officer at Twycross Zoo, said the zoo has been running at 35 per cent capacity and is ‘being super careful’ with crowd control

She told the BBC: ‘I knew it was going to be different but I really wanted to support the zoo knowing that they were struggling but I can honestly say at certain points I just didn’t feel safe.’

Dr Sharon Redrobe, chief executive officer at Twycross Zoo, said the zoo has been running at 35 per cent capacity and is ‘being super careful’.

The zoo, which is struggling under financial hardship, had previously said it would operate at five per cent capacity, moving up to 30 per cent as time goes on.

Dr Redrobe said: ‘We want everyone to have a good time and of course feel safe.

‘We are being super careful and putting in place all the measures that are expected of us.’