Dizzying achievement: Trampolining teenager does a record EIGHT backflips from a single bounce

A teenager has become the first person ever to complete eight backflips in a single bounce on a trampoline.

Ernest Brenchley, 15, from Canterbury, Kent, posted a video on his social media yesterday where he completed the world-first stunt.

The video shows Ernest practising ahead of the stunt both at an indoors trampoline centre in Switzerland.

The footage then cuts to his attempt which took place outdoors in the Netherlands. 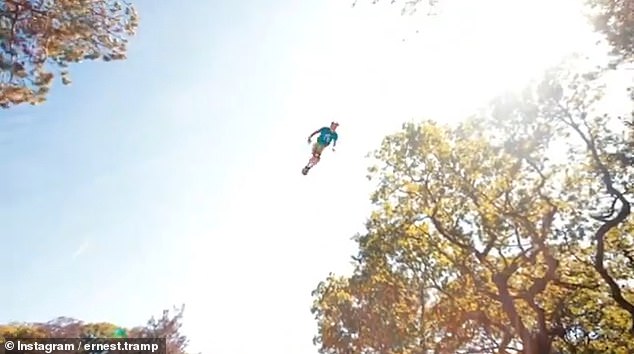 Flying high: Ernest Brenchley, 15, jumps high in the air in the Netherlands, with some help from his friends, to begin the world’s first ever eight-backflip trampoline jump 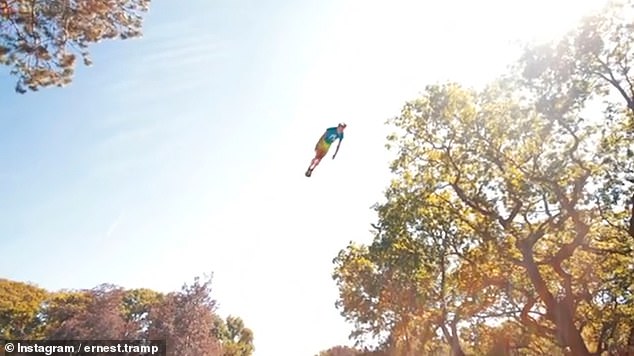 Ernest, who has been trampolining for four-and-a-half years, is seen gaining momentum as he winds up to attempt his eight-backflip jump as his friends complete smaller jumps to increase the height he is able to reach.

He then rises high into the air and begins his backflips, rotating faster and faster to try and push his limits.

As Ernest nears the bottom of his descent, one of his friends pushes a crash mat underneath him to soften his landing.

Ernest just manages to squeeze his eight rotation in before he hits the mat and his friends run onto the trampoline to bundle him in celebration of his achievement.

Speaking to MailOnline, Ernest said that the goal of reaching eight flips had been in the works for some time. 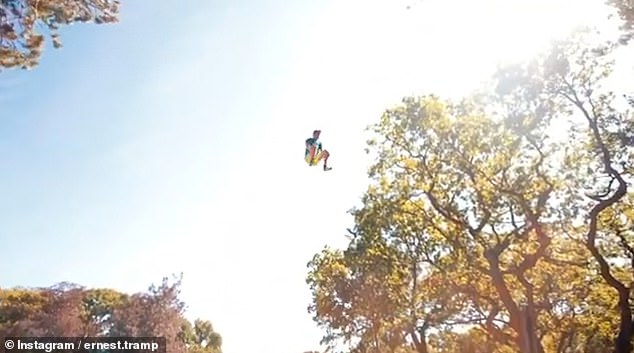 The 15-year-old from Canterbury, Kent, begins his descent by tucking his knees in tight to begin rotating 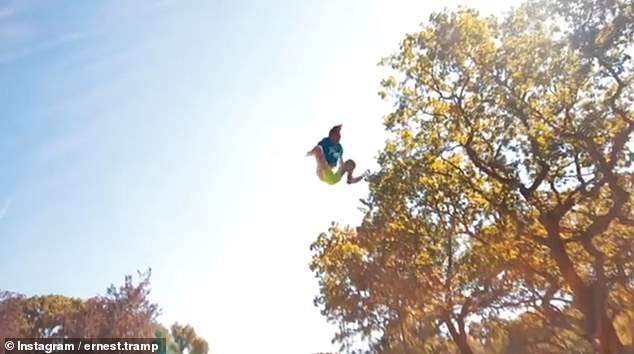 ‘About two and a half weeks ago I did another stunt which was six flips to seven flips and I did it to my back, which in my sport, is usually a sign you can add another one on, you go a little bit higher. I did seven and a half and I thought “Why don’t I go for eight?” I was in the perfect location to do it for the week.’

He also said that the key to completing so many flips is in practising to become familiar with a particular trampoline to see how it reacts and experiment to see how high he could reach.

Focusing on perfect technique and training the speed of rotation is also important.

Last year Ernest became the first person ever to complete a septuple kaboom flip at the Bouncelab Belp in Switzerland but he said that this year’s record meant much more. 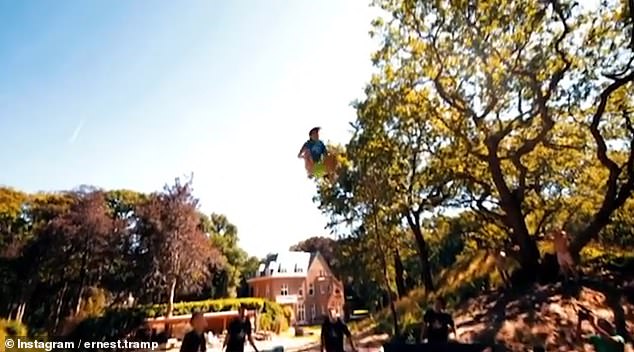 Friends cheer as Ernest nears the bottom of his descent, still rotating at a high speed 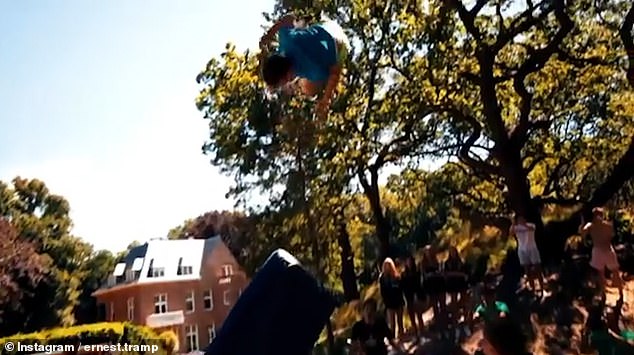 ‘It hasn’t fully registered yet in my brain but yeah it’s pretty good,’ he said. ‘It’s better than being the world’s first to do seven, that’s for sure.

‘That was a good feeling but doing eight is just ridiculous. I don’t know how long it’s going to take to register in my head – a long time.’

Despite the euphoria of achieving eight flips, Ernest has no plans to try and reach nine.

He said: ‘No not at all, not at all. Personally, I think it’s almost physically impossible to reach nine.’

Ernest, who is part of the Radial Flipz group, had been visiting friends in the Netherlands when he completed his eight-flip stunt and he says that he had to have complete faith in them to keep him safe.

‘100% trust, he said. ‘I have to trust them with my life because at that height it is pretty much life or death.

‘It’s never gone wrong. We have seen the bad side of it which is falling off, knee injuries, back injuries, neck injuries but there’s never anything serious.’

The video of Ernest completing his record stunt has already been viewed more than 44,000 on Instagram.