Santos: The recent demise of Holden’s business in Australia closed a major chapter for the company, its employees and fans, but it also closed a tome that began and ended on the other side of the world for me.

Let’s go back a year and 13,000 kilometres to the most unlikely of museums – a vintage car display at the Memorial Necropole Ecumenica, a funeral home and vertical cemetery in Santos, on the coast of Sao Paulo state, Brazil. 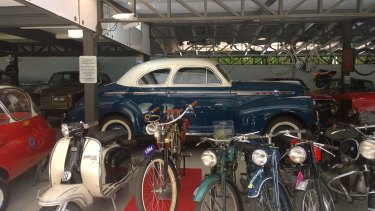 The vintage transport museum at the Memorial Necropole Ecumenica in Santos, Brazil.Credit:Lia Timson

The private complex sprawls 1.8 hectares on the foot of a hill belonging to the Atlantic Forest in the middle of the seaside city of 434,000 people. Along with the museum, there are several 10 and 14-storey vertical cemetery towers, a cafe, an auditorium complete with ''soothing water wall'', a cremation chamber, mausoleum, ossuary rooms, a glass chapel, a children’s playground and a wildlife park.

From a distance, it looks like just another apartment complex common in South America. Close by, it's a peaceful arrangement of buildings around gardens, waterfalls and fish ponds. It's hard to believe it holds 25,000 burial recesses, or tombs.

The burial plots are built into walls and are surrounded by verandahs on all sides. At the back of the walls, running vertically through the centre of each building, is space and pipe work for the proper ventilation and management of remains. My engineer dad would have marvelled at the feat. 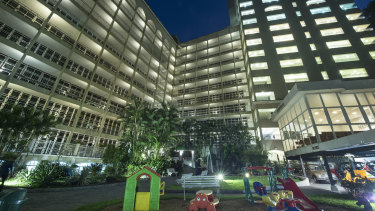 There are 25,000 vertical graveyards at the Memorial Necropole Ecumenica in Santos, Brazil. The vintage car museum sits under the glass chapel on the right.

The complex features in the Guinness World Records for tallest cemetery in the world and it is a tourist attraction on the city’s map. It also offers ''remote participation'' – meaning online video attendance – of vigils and cremation ceremonies.

On the top floors of each building are a number of private wake suites, some completely white, each with interconnected rooms to cater for families and guests as they sip fresh coffee or tea near the entrance, use the free wi-fi in the lounge, or sit quietly near their departed in vigil. In the distance, toucans and macaws sing life uninterrupted and lion monkeys scream at feeding time. 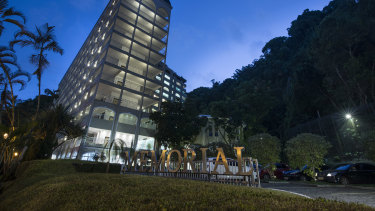 The cemetery sits at the foot of a corner of the Atlantic Forest in the city of Santos, on the coast of Sao Paulo, Brazil.

Some suites also have a hotel room, discreetly tucked around the corner on the same level, so that distressed family members or those coming from afar for the funeral can regroup or stay the night.

The complex is big, but not opulent. Grand but somewhat modestly encrusted on the hill among the lush forest. 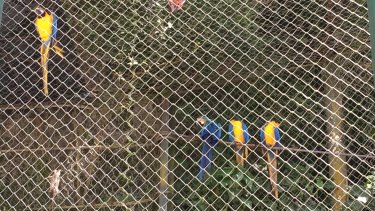 Macaws in a semi-closed forest cage at the vertical cemetery. Tucans and other animals are able to come and go.Credit:Lia Timson

On the wraparound verandahs there’s time and space for reflection. Silence but for the sounds of waterfalls and a cool gentle breeze from the forest to calm the aching heart. On the other side, for those who live for their sport, a spectacular view of the city’s beloved football stadium where Pele, still a national hero, scored the first of his record 1281 goals. (The memorial does charge a premium for plots with a view.)

My father had no idea his story would come to end in such a fitting spot. He was soccer mad, his heart belonged by the beach and his own dad kept a family of lion monkeys at home as pets.

Besides, we come from a family of GMers – people who have worked for General Motors, Holden’s parent, all their lives. Dad toiled there for 39 years, my grandfather for 42 and my mother for 12. Cars is what they did.

I remember dad being proud that engines made in the Brazilian factory were assembled into cars in Australia and later that the Holden Commodore sold in Brazil rebadged as the Chevrolet Omega. It was another lane in his proud personal bridge between the two countries.

Cars that came out of "dad’s factory", as I innocently called it while growing up, include the Chevrolets now in the cemetery’s collection. He would have loved to see how well preserved the 1957 Belair and 1936 Master are.

Jon Faine, ABC Radio Melbourne’s former presenter, as secretary of Melbourne Transport Museum Inc argued in The Age this month that Holden’s former Fishermans Bend headquarters should be turned into ''a world-class transport museum and educational drawcard, a showcase of innovation spanning from 100 years ago to the present and into the future''.

Museums do that. They are indeed capable of transporting visitors to moments where the past and future fuse with the present, where knowledge and understanding suddenly, but gently, commune. Places where we can learn more about ourselves and those dear to us.

The private car collection of an eccentric cemetery owner did that too. To me, anyway.