Trapped in paradise: UFC ring girl spills the beans on the revolutionary world-first Fight Island that’s keeping the sport alive during the pandemic – as Aussie superstar counts down to the fight of his life

Sydney Octagon girl Red Dela Cruz has been trapped in paradise for the past three weeks.

There’s five-star food available 24-7. There’s a beach, and a collection of swimming pools.

There’s even a golf course and a Formula One motor racing track on which to while away the hours of isolation. But, Dela Cruz explains, there’s also one golden rule.

If you leave Fight Island, you can’t come back. 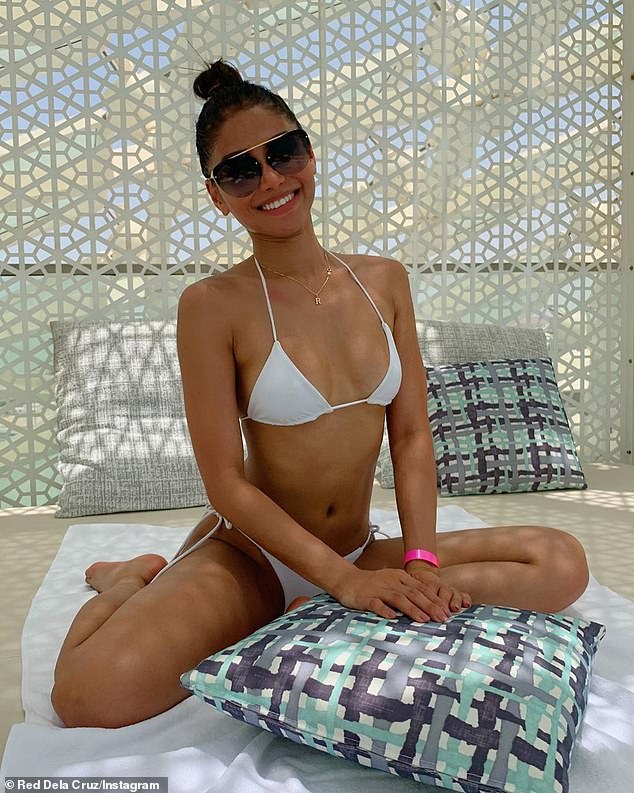 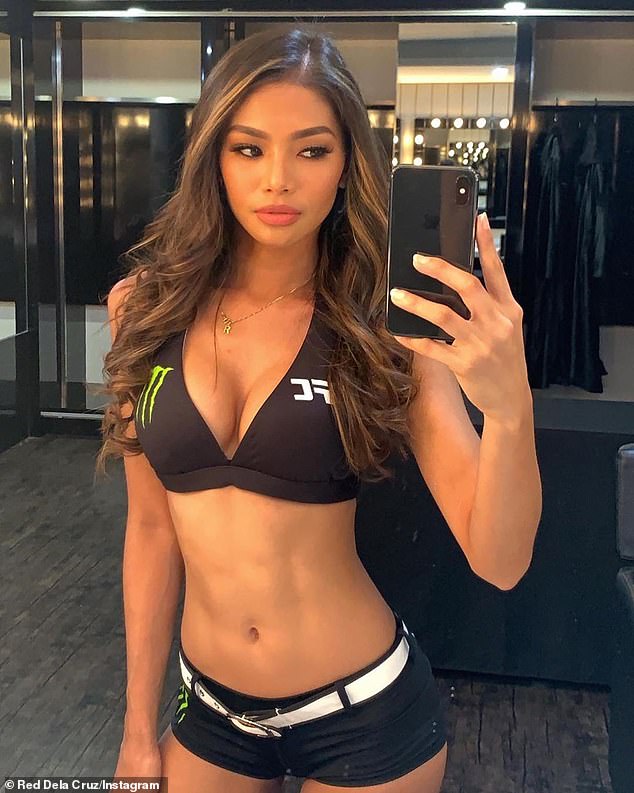 Since she won the first UFC Octagon Girl Search in Asia back in 2015, she has been living the high life 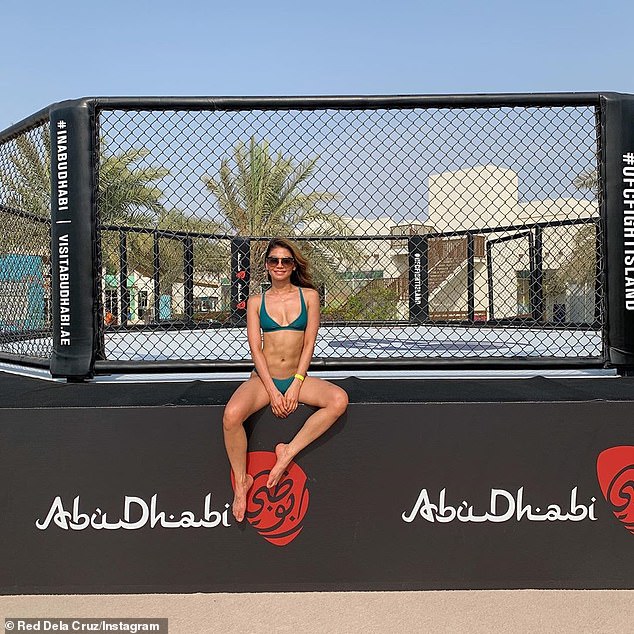 Fight Island has been set up on Yas Island in Abu Dhabi in the United Arab Emirates.

It covers 26 square kilometres and is a ‘bubble’ where competitors and UFC staff are locked down and constantly checked for coronavirus, with more than 2,000 tests carried out so far.

It took 740 workers more than 400,000 man hours to complete and is now its own little world, as Dela Cruz has discovered.

‘We’ve been getting up, using the gym, hitting the buffet breakfast, sitting around the pool, chilling for a few hours,’ she said.

‘Then there’s lunch and dinner and all this great food. It’s been like this amazing working holiday to have all these facilities. And this is probably the safest place on Earth right now, given all the testing we’ve been through to keep Fight island COVID free.’

Dela Cruz might just have a point, given the fact that the global COVID-19 pandemic continues its spread, and given the relentless testing those on Fight Island have endured before and since arriving in the United Arab Emirates for the month, part of a community of around 2,500 people living and working in splendid isolation from the outside world on ‘Fight Island’ in Abu Dhabi

‘It was two tests in Sydney, two tests on arriving in Abu Dhabi, and then 48 hours in quarantine,’ Dela Cruz told Daily Mail Australia, tucked away safely in her Fight Island hotel room.

‘There are also more tests – seven so far, all in all. But the nurses have made it fun. The nasal swab is a bit like tickling your brain. There’s one more test before Sunday’s event and then we leave. It’s been an amazing experience and we know everyone in the world has been watching us.’ 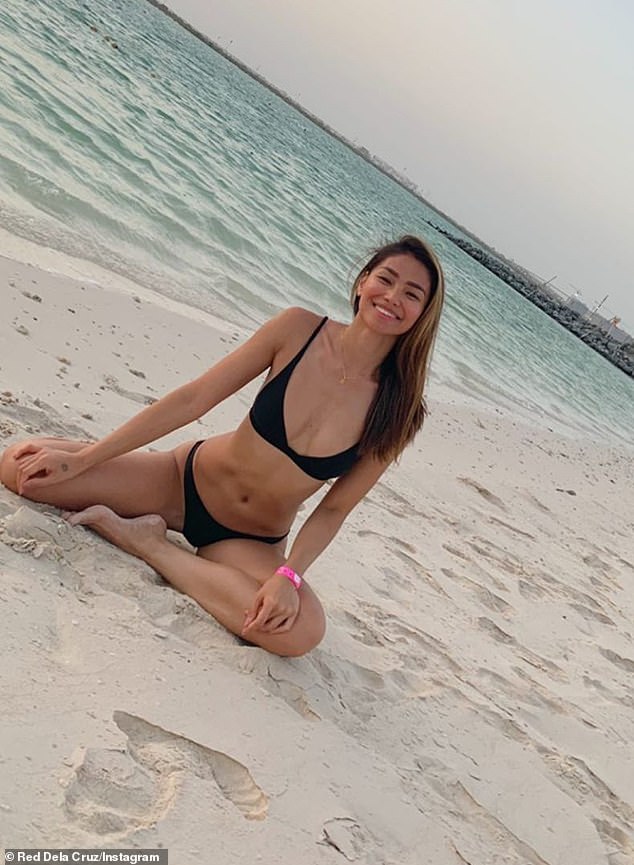 Despite being trapped on the island, Dela Cruz says she doesn’t mind living there. There’s five-star food, available 24-7, a beach, and a collection of swimming pools The Ultimate Fighting Championship’s ‘Fight Island’ concept has captured global attention ever since the Los Vegas-based mixed martial arts promotion’s boss, Dana White, announced back in April he had dreams of taking his fighters – and the action – ‘off-shore’ to escape the clutches of the coronavirus.

With the backing of the Department of Culture and Tourism Abu Dhabi, the UFC has been able to commandeer around 10 square miles of the Yas Island and within the complex the use of seven luxury resorts, as well as F1’s £1 billion Yas Marina Circuit.

The goal has been to stage four fight cards, the last of which is set to kick off on Sunday morning (Australia time) with a middleweight bout between Australia’s former champ Robert ‘The Reaper’ Whittaker and the Englishman, Darren ‘The Gorilla’ Till.

The sacrifice – for all those involved – has been the sort of relentless virus testing procedures needed to keep COVID-19 at bay, and to quickly attend to anyone who might show symptoms – before they are even allowed in the gates. 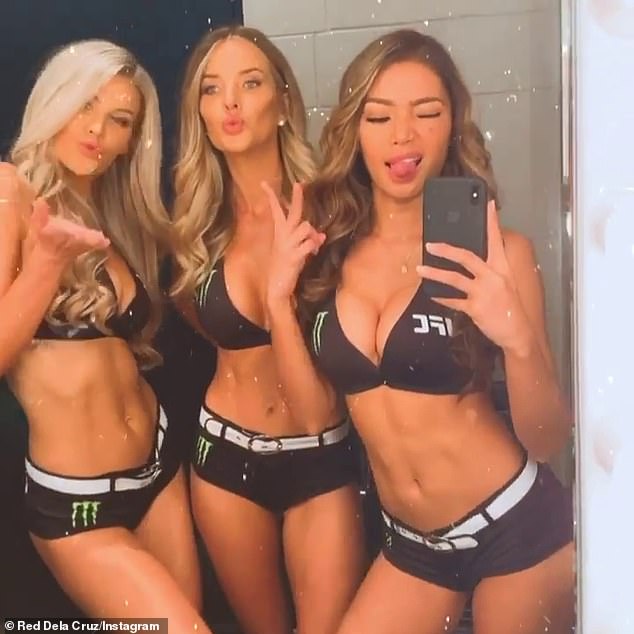 Dela Cruz quickly built up a loyal fanbase, and a social media presence that allows her millions of followers to travel with her across the globe as her career with the UFC develops 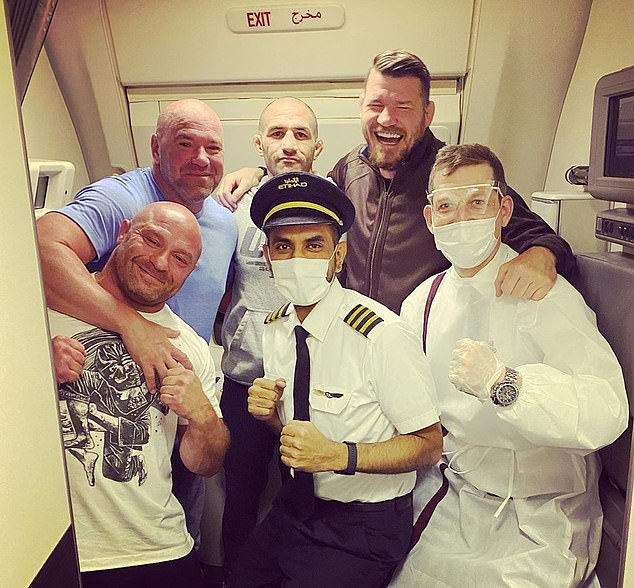 UFC president Dana White (top left, flying to Abu Dhabi) is banking on Fight Island to keep the sport alive during the pandemic

The reward is a month’s work – ‘We all feel blessed in these times to be able to continue to work,’ said Dela Cruz – and the chance to make use of those five-star facilities, and the food.

‘It’s been hot – more than 45 degrees, but we are loving the experience,’ said Dela Cruz, who is working alongside fellow Octagon girl Camila Oliveira for all four UFC Fight Island events.

And then there are the fighters.

Wollongong featherweight Alexander Volkanovski flew in town to defend his belt in a rematch on July 12 against the man he took it from last December, the Hawaiian Max ‘Blessed’ Holloway.

The 31-year-old Volkanovski got that job down, grinding out a gritty split decision over five rounds. And he was quick to reveal that training had denied him his dream of being able to hoon around the F1 racetrack – and to capture the moments to share with his online community.

During their 48-hours of quarantine on arrival on Fight Island, fighters and their coaches have been able to set up training mats in their resort rooms, to limit the disruption to their fight plans, and weight cuts, before they enter the fray. 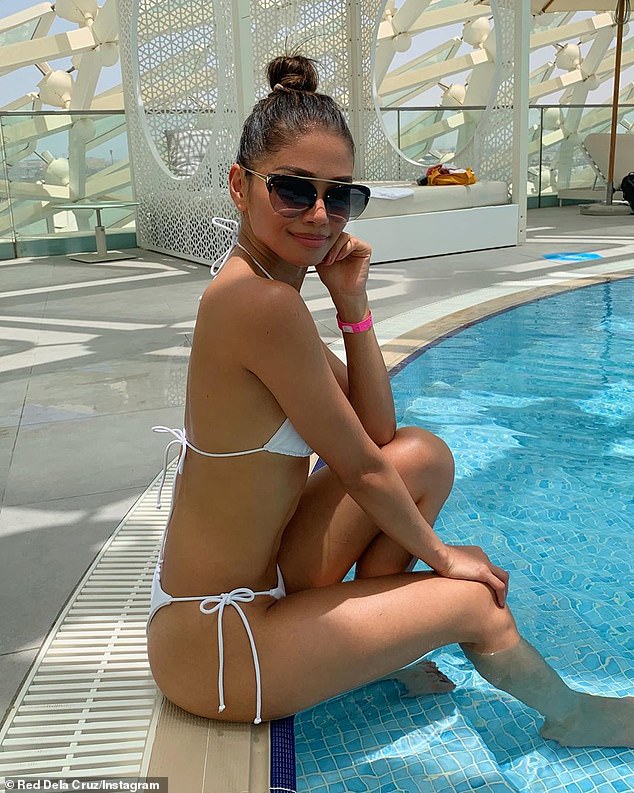 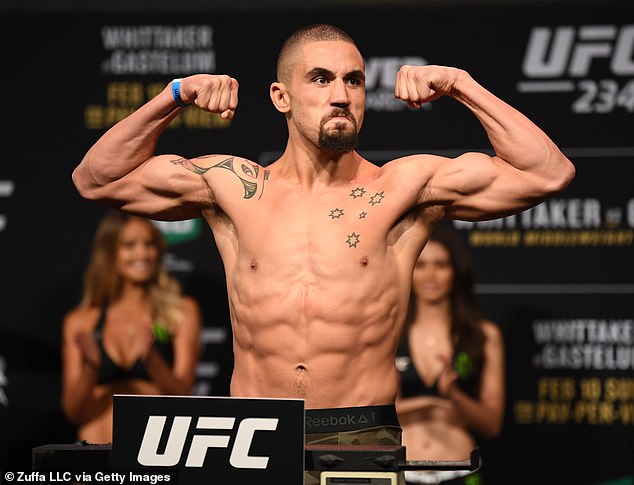 ‘There was more room in the plane,’ he told a pre-fight virtual media day. With the world the way it is and the fact that we’re not allowed to leave the island it’s a little weird but it’s good to be here. It’s been a great experience and everything has gone smoothly. The way the UFC have set things up has been been amazing.’

An avid gamer –he’s admitted in the past that Elder Scrolls is among his poisons – Whittaker has set himself up, in-room, with console at the ready.

‘I haven’t stopped playing video games,’ he told reporters. ‘This is the first time I’ve left my room in days. There’s no training time, the work’s been done.’ 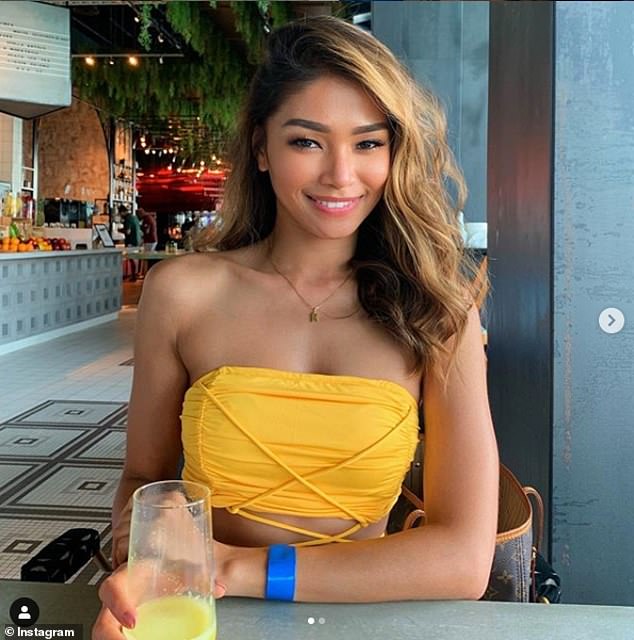 ‘We all feel blessed in these times to be able to continue to work,’ said Dela Cruz – and the chance to make use of those five-star facilities, and the food 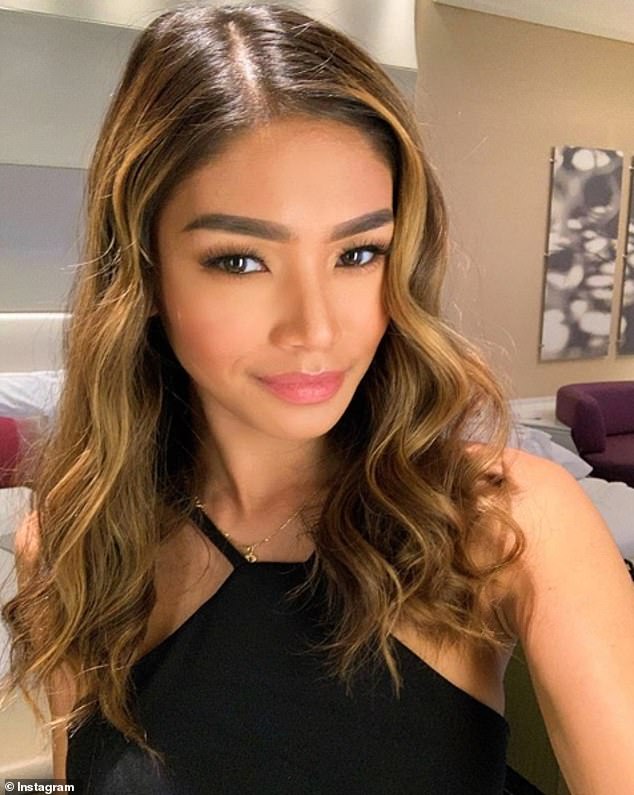 The downtime seems to have worked a trick with Whittaker, who’s returning to action after contemplating retirement just six months ago, following a knockout loss to New Zealand’s Israel Adesanya in Melbourne last October and a few years of struggling with health issues.

Fight Island beach time has been a good time, according to the fighter.

‘I want to fight Darren, eat some good food and go back to my family,’ he said. ‘The biggest secret in this game is to not get hit … and to hit him.’

What is the UFC’s Fight Island?

Forced to take drastic action by the coronavirus crisis, the UFC launched their ambitious plan to hold events on Yas Island, where 10 square miles have been set aside to to stage the shows. There’s even an octagon on the beach.

Fight Island is located in an area of Abu Dhabi which has been described as a billionaire’s playground.

Yas Marina Circuit is a sprawling race track has hosted the Formula One Abu Dhabi Grand Prix in since 2009 and there is also a world class golf course near the beach. 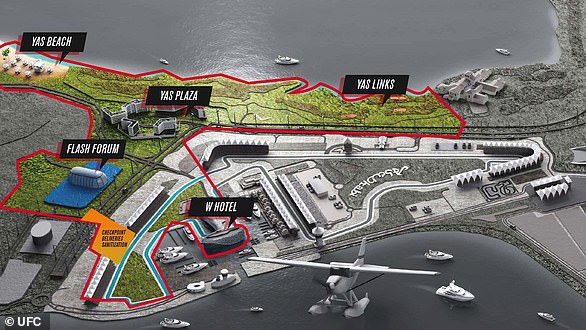 Ferrari World, Seaworld Abu Dhabi – which is a project still under construction – and a huge water park are other attractions.

And now the island is home to the UFC for four events. It seems unlikely that the octagon on the beach will be used for the fights themselves and is merely a promotional tool.

The temperature is oppressive in July and can reach highs of 42 degrees, averaging around 35 degrees, so an air conditioned arena is far safer for fighters to perform in. 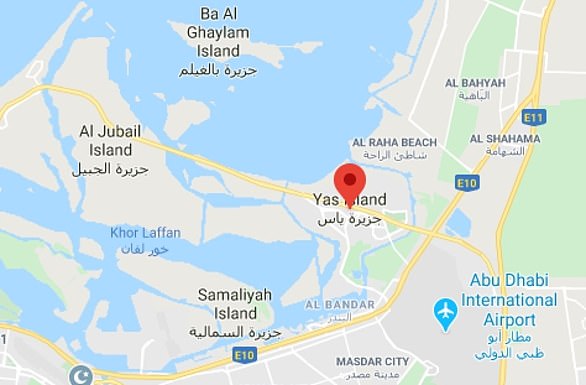