DONALD Trump says he may end the US lockdown by the end of March insisting “we cannot let the cure be worse than the problem itself.”

The US President's latest tweet comes as global stock markets plunged this morning while the Republican's stimulus package to help American businesses stalled. 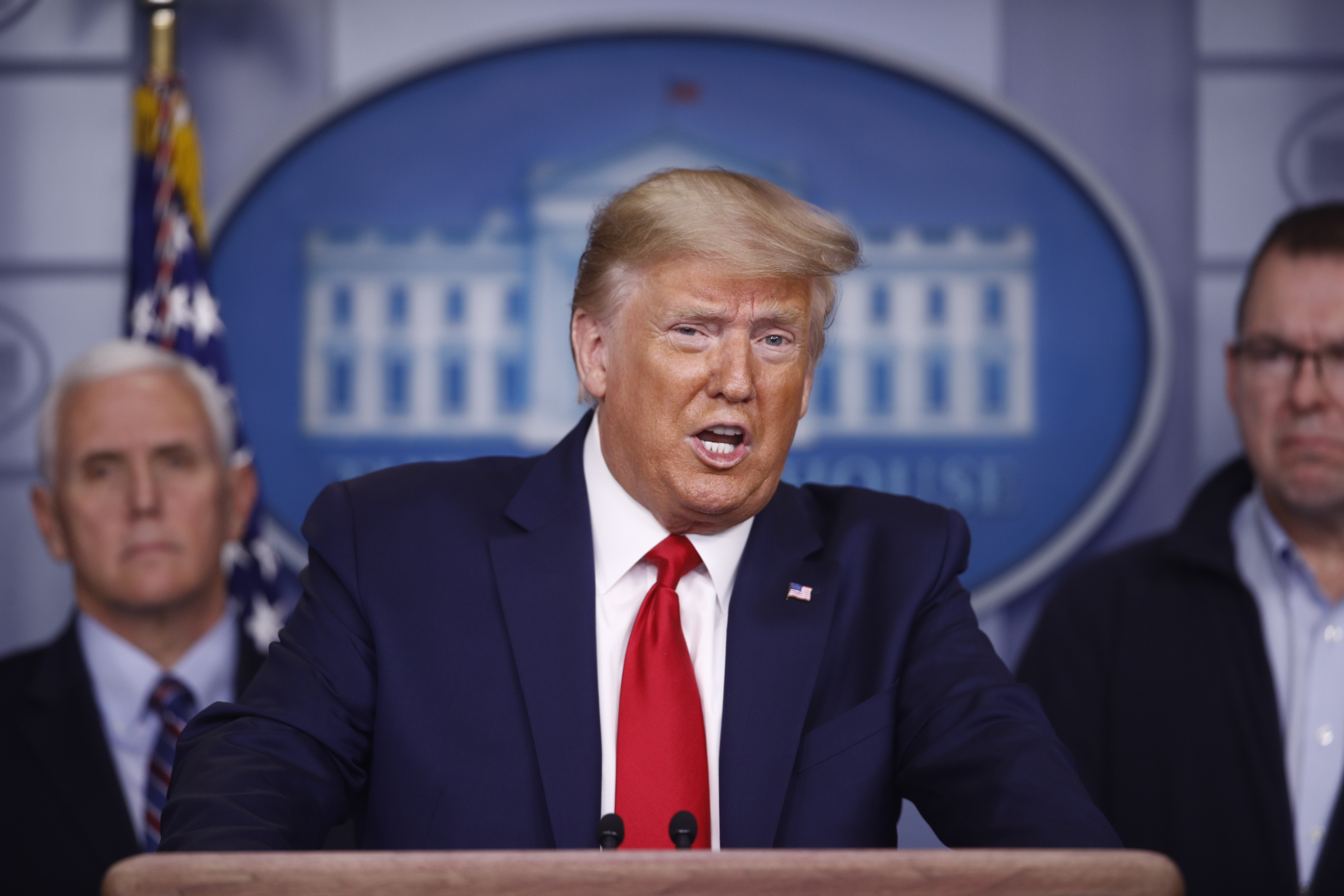 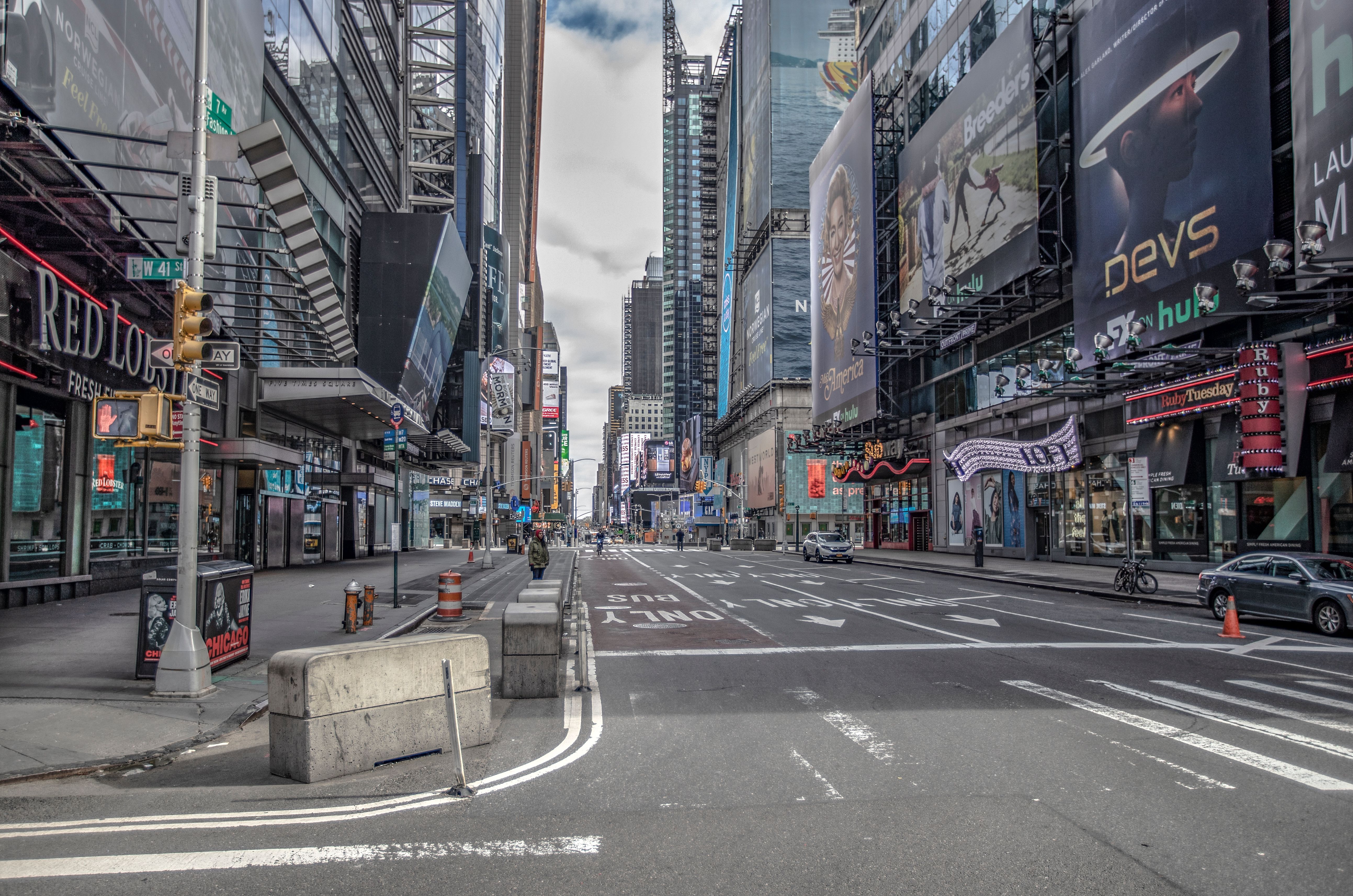 And with travel bans in place across the US and many cities locking down cafes and restaurants, the firebrand has now declared that his government will make a decision on “which way we want to go”.

Trump tweeted: “WE CANNOT LET THE CURE BE WORSE THAN THE PROBLEM ITSELF.

“AT THE END OF THE 15 DAY PERIOD, WE WILL MAKE A DECISION AS TO WHICH WAY WE WANT TO GO!”

The 15 day period refers to the new guidelines Trump issued on March 16, aimed at slowing the spread of COVID-19, which means the President could lift restrictions at the end of the month.

His tweet is contrary to his recent actions to stop the spread of coronavirus which has infected over 35,000 people and killed 471 in America.

Trump yesterday pledged to send the National Guard into Washington State, California and New York – the three hardest-hit areas of the country.

However, the US economy, which had been booming since his 2016 election win, has taken a battering since the outbreak of coronavirus.

This morning, US futures slipped more than 3 per cent and share benchmarks in many world markets logged sharp losses as governments tightened restrictions to fight the pandemic.

Top-level negotiations between Congress and the White House continued after the Senate voted against advancing a nearly $2 trillion economic rescue package. 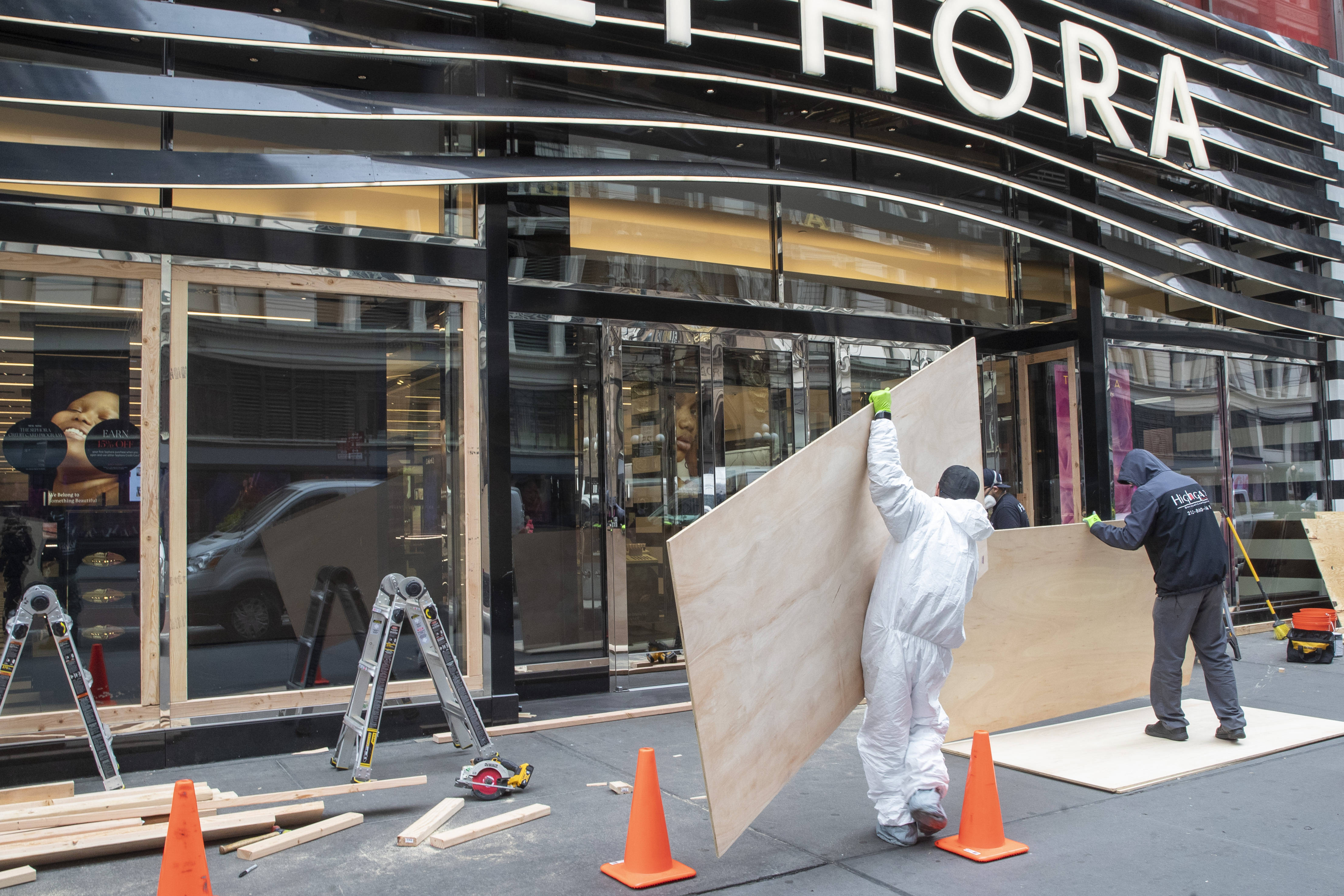 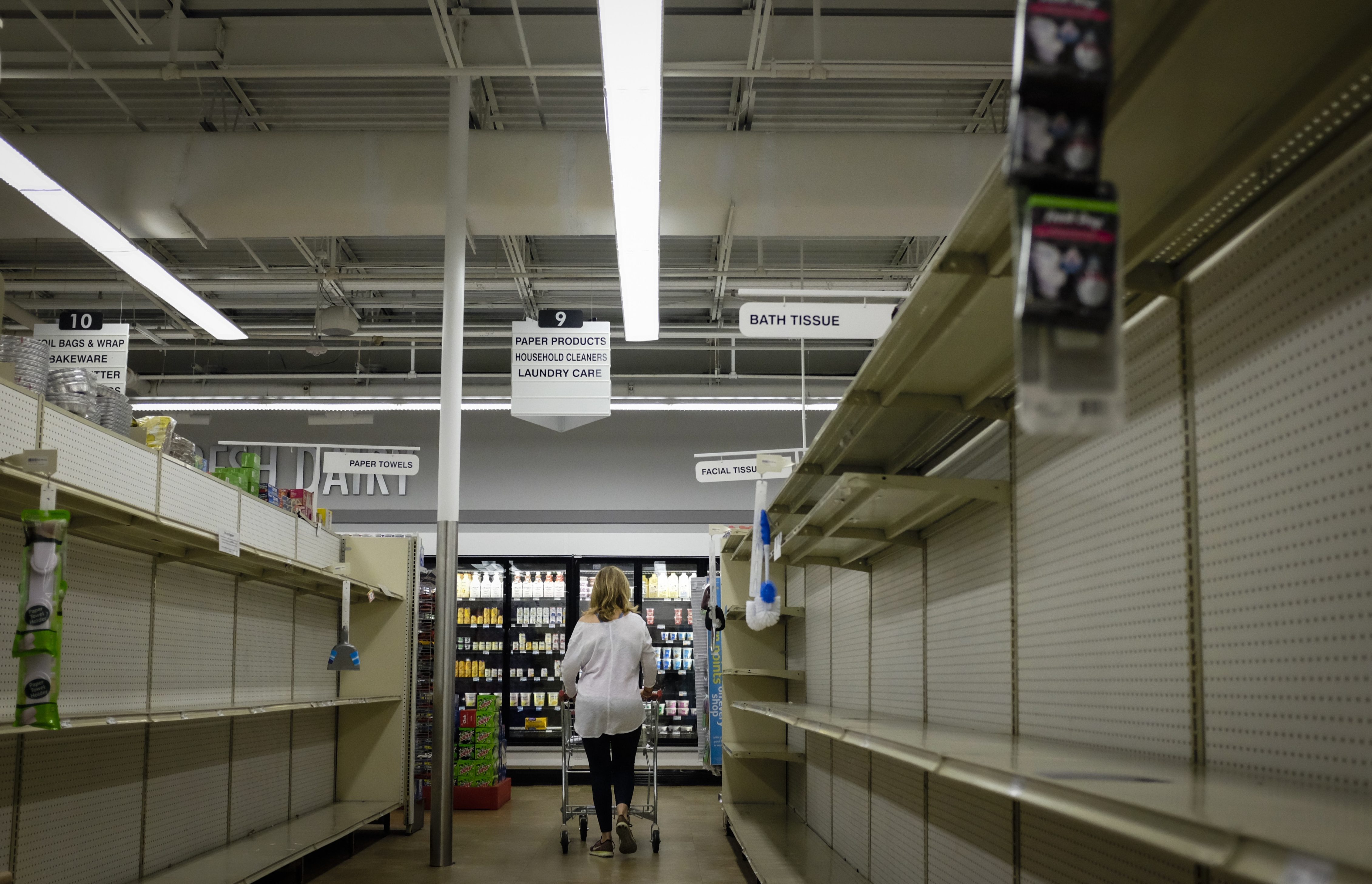 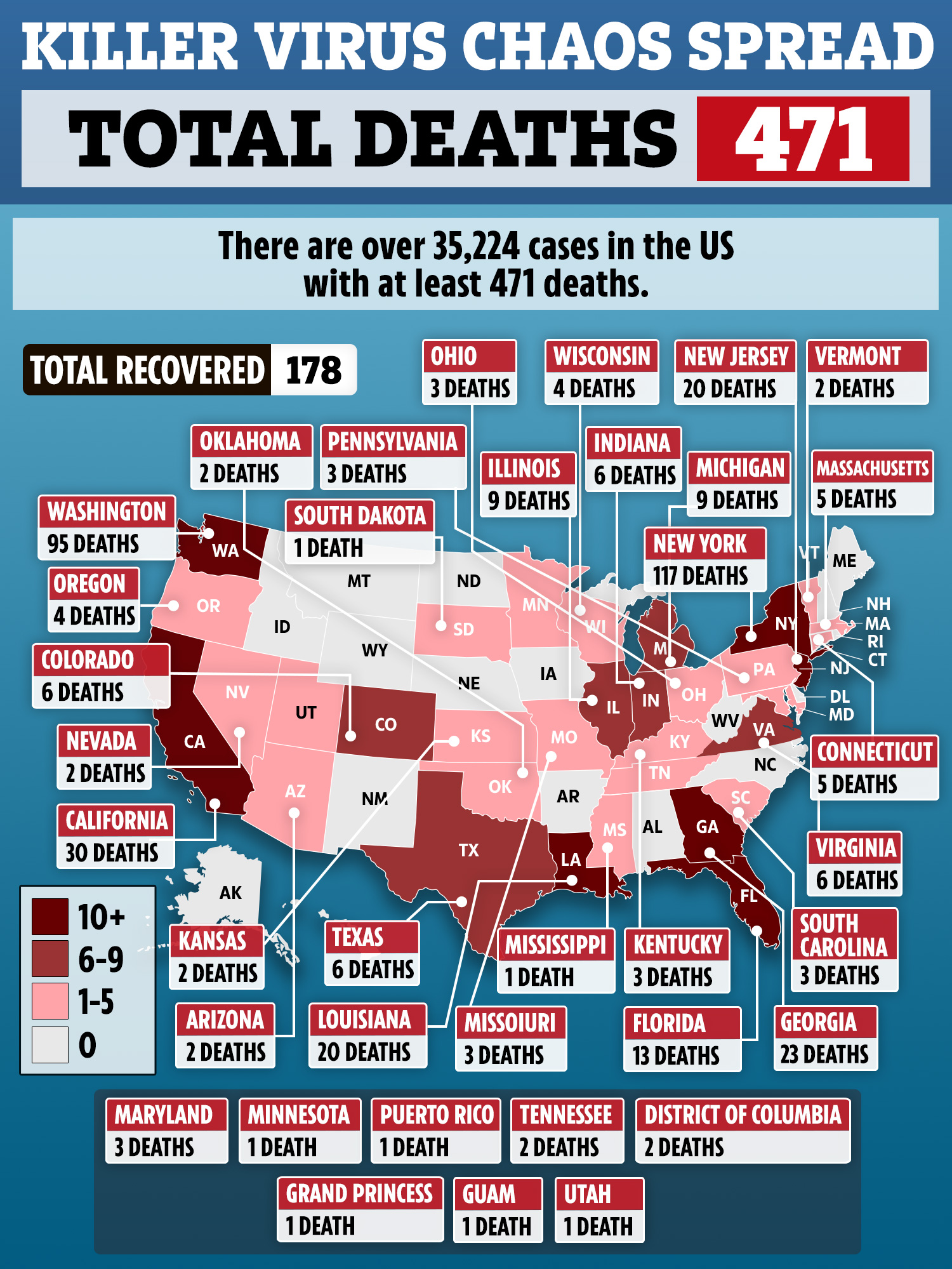 Another vote was expected Monday as the Democrats said the bill was tilted too much toward aiding corporations and would not do enough to help individuals and healthcare providers weather the crisis brought on by the pandemic.

President Trump made the announcements as Ohio, Louisiana, Delaware became the latest states to order lockdowns.

More than 7,000 National Guard soldiers were deployed across the US after the president said the country would defeat the "invisible enemy" in a press conference on Sunday.

His comments come as officials in New York, Washington state, and California scramble to stop the spread.

Trump authorized federal support for governors' use of the National Guard in all three states, confirming that FEMA would fund "100 percent of the emergency assistance activities, as per a White House press release.

During Sunday's conference, Trump reassured people who felt lonely in self-isolation, saying the country was "all joined together as one people" with a "shared national spirit."

"No American is alone as long as we are united," he told reporters, citing the emergency supplies en route to the three hard-hit states.

New York was also described as a "major disaster" zone on Friday before California was approved to declare the same declaration on Sunday.

This means more than 101 million are now living in a disaster zone.

The three declarations will help out the struggling recovery efforts in the areas and communities that have been ravaged by the killer coronavirus.

Crisis counseling will also be available through this Federal assistance funding for people who have been traumatized by the ongoing outbreak, which first emerged in Wuhan, China.

Elsewhere, Washington state and California have been similarly hard-hit during the coronavirus crisis, with 96 and 27 fatalities respectively.

The death toll is also mounting in New Jersey and Louisiana who have had 20 fatalities each this week.