Long before Ikea, Nissen huts were the original flat-pack.

Skinned in corrugated iron, and assembled in as little as two hours as temporary housing or army barracks, they ended as permanent homes to for migrants and miners living in communities dubbed silver cities and pommy towns. 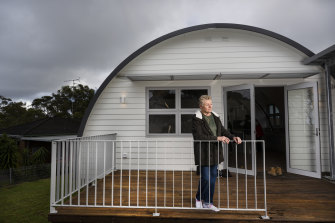 Rosemary Roberts outside the newly renovated Nissen Hut where she grew up in Belmont North.Credit:Louise Kennerley

These semi-cylindrical prefabricated homes were built for speed and ease of transport, but not for comfort, said Ian Innes, director of capital programs with Sydney Living Museums. “It was like living in a sardine tin. There was absolutely no insulation whatsoever. They were absolutely freezing in winter, and it was like being in an oven all summer.”

Aged care worker Rosemary Roberts grew up in a 90-square-metre Nissen hut near Newcastle that has been extended and restored by Sydney Living Museums. It will go on the open market for sale by July.

When it was hot, Roberts said she would lie on the cool of the lino under her bed to escape the heat. Back then, the family of seven squeezed into three small bedrooms that blocked the view from the window of the beach nearby. She would climb onto 3.2-metre-high roof. 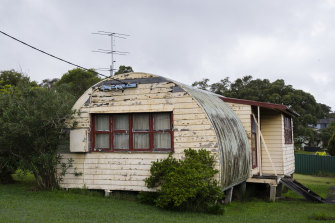 There was one bathroom. “Us kids would be fighting, ‘Get out, I am next to go’,” said Roberts.

The newly renovated home is full of light, has an unobstructed view of the sea, and a new wing with a master bedroom suite with an ensuite and walk-in robe. It also has twice the amount of insulation as required under the NSW building standards, said the builder Tom White of T. White Construction.

Surrounded by the surviving 23 out of the 50 huts built at Belmont North in the early 1950s, SLM’s Innes hopes it will inspire future buyers and owners across Australia to convert the huts into comfortable homes without losing their architectural integrity or history.

“That was the original motivation … to say look, ‘You don’t have to demolish them. You can do it in an empathetic way, and end up with a lovely modern house that maintains the integrity’,” said Innes. 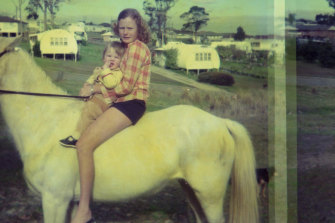 Sonia Roberts with nephew Paul in 1968 near the Nissen huts in Belmont North near Newcastle.Credit:Roberts family

More formerly known as an outdoor migrant hostel, pommy town in Belmont North was erected to house migrants and public housing for families. They were later sold to the families lived there.

When it was built, the home was a step up from the tent that the Roberts’ family had lived in earlier when the post-war housing shortage was at its worst.

Designed by British engineer Peter Nissen in 1916 to house troops, the huts also use pegs and wire to anchor the structure in the ground and hold them up.

Because the Nissen huts were designed to be transportable, they used the minimum amount of material necessary to support the structure, including the roof, which held the building together, said Innes.

Once widespread across Australia, and common as tool sheds and scout halls, these industrial relics that look like a tin of Campbell’s soup chopped in half are now disappearing or being altered beyond recognition.

“Nobody valued them,” said Innes.

Because they lacked state or federal protection, they can be razed easily. After the trust bought the house, residents campaigned against heritage listing. 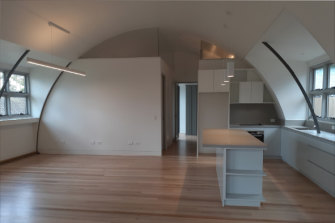 A Nissen hut under restoration. Credit:

A local told the Herald in 2009 that the huts had served their purpose and were past their use-by date: “Preserve one for heritage reasons and let the others go,”

Charlie Leggat, then 84, a Scottish migrant who twice swapped rented huts before buying his home for $2800 in 1967, wrote to the council saying conservation plans could “turn pommy town into a shantytown” littered with crumbling Nissen huts with reduced resale value.

“It’s been a good place to live, but only because I made it good. Left alone it would fall apart.”

Surrounded by suburbia today, there was nothing but bush when Roberts was a girl.

But it was a good life, she said, where everyone knew everyone else. “We were just pommy town kids, just average kids,” she said.

Her family was second-generation Australian-born. “Everyone’s wage was about the same,” said Roberts.

Innes wonders what it must have been like for new migrants. “It must have been awfully isolated if you were a migrant to Australia who had recently arrived, and shunted off up north, you would think, ‘What on earth have I come too?’,” he said.

“Things previously overlooked, or not considered heritage at all, change in their significance. The imminent threat of demolition often focuses attention on whether something is significant or not.” 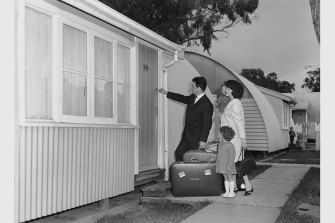 A migrant family enters their new home with hopeful faces at Maribyrnong, Victoria, 1965. Nissen huts were a common feature of life in a “silver city”.

The Endangered Houses Fund was designed to preserve existing homes without turning them into museums.