Senator Elizabeth Warren’s decision to drop out of the Democratic primaries will make many women wonder what it will take to convince the major political parties to start running more female candidates. It is not as though Senator Warren was bested by an overwhelmingly superior male candidate.

Her departure a full eight months before the US presidential election reduces the race for the Democratic nomination to a contest between two septuagenarian white guys: Joe Biden and Bernie Sanders. With her gone, it is guaranteed that voters in November will choose between one of them and Donald Trump, also a septuagenarian white guy but one with a bad record on women’s issues to boot. 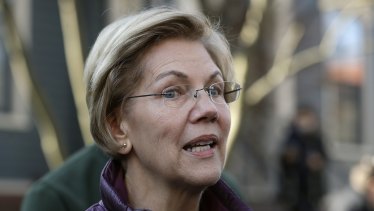 Elizabeth Warren announces her decision this week to bow out of the race.Credit:AP

There is a parallel between Senator Warren and Hillary Clinton, who came so close to being elected the first female president of the United States. Senator Warren was a plausible candidate with an impressive career in the Senate and a record of strong leadership and blazed the trail for cleaning up US banks after the global financial crisis. For many women, her departure will be a body blow. As Senator Warren said on Thursday: ‘‘One of the hardest parts of this is all those little girls who are going to have to wait four more years.”

Of course, gender was not the only reason that she did not win the Democratic nomination. She made some mistakes by adopting complicated policies on key issues like healthcare which were hard to explain. But as with Mrs Clinton’s loss in 2016, gender certainly played a role in her defeat. Mr Trump was able to attack Mrs Clinton as a nasty “mother-in-law” using blatantly sexist stereotypes.

Senator Warren did not face that sort of direct attack from her much more woke Democratic Party rivals, but some voters seem to have been reluctant to support a woman who had such a combative and forensic style. Senator Warren’s polite but brutal attacks destroyed the campaign of billionaire Michael Bloomberg, who also stepped down from the race this week.

Democrats are desperate to get rid of Mr Trump and perhaps they feared Senator Warren could not win back Middle America. Yet that might also be a result of the politics of gender. Even progressives who themselves long for a female leader sometimes have a sort of perverse prejudice against choosing women because they think other, more conservative voters will never vote for them.

We will never know, which is disappointing for the US election, if only its political theatre. It would have been interesting to see Senator Warren use her acid wit on Mr Trump.

Here in Australia, of course, we have nothing to boast about. The gender imbalance in the current cabinet is at 1950s levels. Leading Liberal women including former foreign minister Julie Bishop have spoken out about the boys’ club and while the ALP has been more successful in promoting women to winnable seats in Parliament, its leader and deputy are both men. Only two states have female premiers.

Unfortunately, it may be that at a time of global instability even progressive political parties are reverting to old ways and going with male candidates.