New Orleans: As the number of worldwide cases of coronavirus infections escalated past half a million people on Friday, Saturday AEDT, a new test promising to deliver positive results in five minutes was approved in the United States.

The US Food and Drug Administration conducted an emergency clearance of the new rapid cartridge-based test from Abbott Laboratories on Friday night, with the company announcing the test also delivers a negative result in 13 minutes. 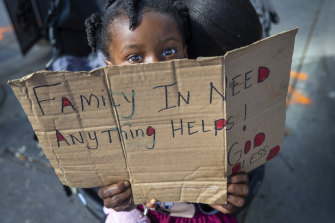 Nyla Clark, 3, accompanied by her mother, Chavonne Clark, sits in a baby stroller at a corner in New Orleans, US, hoping to get a few dollars from an occasional passerby.Credit:The Advocate/AP

While New York remained the worst hit city in the US, Americans braced for worsening conditions elsewhere, with worrisome infection numbers being reported in New Orleans, Chicago and Detroit.

"We are not through this. We're not even halfway through this," said Joseph Kanter of the Louisiana Department of Health, which has recorded more than 2700 cases, more than five times what it had a week ago. The US became the first country to surpass 100,000 infections on Friday, according to a count kept by Johns Hopkins University.

New Orleans' sprawling Ernest Morial Convention Centre, along the Mississippi River, was being converted into a massive hospital as officials prepared for thousands more patients than they could accommodate. The preparations immediately conjured images of another disaster, Hurricane Katrina in 2005, when the convention centre became a squalid shelter of last resort in a city that has braved a string of storm hits, not to mention great fires and a yellow fever epidemic in centuries past. 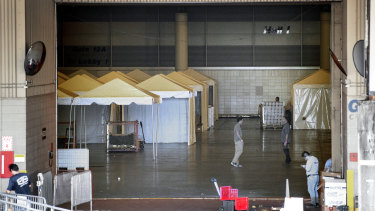 As the new health crisis loomed, economic catastrophe had already arrived in the city, where many already live in poverty and the tourism industry has screeched to a halt.

"I've never been unemployed. But now, all of a sudden: Wop!" said John Moore, the musician best known as Deacon John, who has no gigs to perform with much of the city shut down. "It ain't just me. It's everybody."

In New York, where there are more than 44,000 cases statewide, the number of people hospitalised with COVID-19 passed 6000, double what it had been three days earlier.

Governor Andrew Cuomo called for 4000 more temporary beds across New York City, where the Jacob Javits Convention Centre has already been converted into a hospital.

He also signed a $US2.2 trillion ($3.5 trillion) stimulus package, after the House approved the sweeping measure by voice vote.

More than 595,000 people have contracted the virus around the world and about 27,000 have died. While the US now leads the world in reported infections, five countries exceed its roughly 1700 deaths: Italy, Spain, China, Iran and France.

Dr John Brooks of the US Centres for Disease Control and Prevention warned Americans remained "in the acceleration phase" of the pandemic and that all corners of the country were at risk.

"There is no geographic part of the United States that is spared from this," he said.

Trump, who has repeatedly referred to the outbreak as a "Chinese virus", struck a different tone Friday, tweeting after the call that "China has been through much & has developed a strong understanding of the Virus. We are working closely together. Much respect!"

In Europe, Italy recorded its single biggest 24-hour rise in deaths, with 969 more victims, to bring its total number of fatalities to 9,134. The country now has more than 86,000 cases, surpassing China to record the grim distinction of the second-most infections in the world, behind the US.

Italian President Sergio Mattarella called it "a sad page in our history."

Spain, with the world's fourth-biggest number of cases, reported another 7800 infections for a total of more than 64,000. The country said health workers accounted for about 15 per cent of its cases.

Deaths in Spain climbed past 4900 – the world's second-highest total after Italy.