Ethiopians are bleeding from their noses and mouths before dropping dead in a mystery sickness – which has been blamed on toxic waste from Chinese oil drilling.

The sickness, which has allegedly spread through villages near a gas project in Somali, is also reported to turn its victims’ eyes yellow, before causing a fever, swelling across the body and ultimately death.

Other symptoms of the unidentified illness include yellowing palms, a lack of appetite and sleeplessness.

Officials in Addis Ababa have denied allegations of a health and environmental crisis in the region, the Guardian reported. 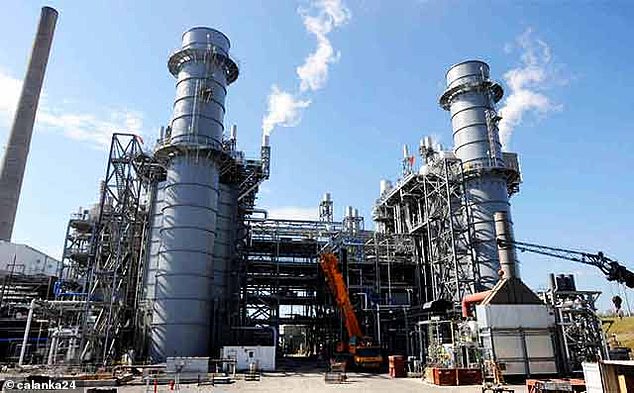 Villagers in Ethiopia are bleeding from their noses and mouths before dropping dead in a mystery sickness – which has been blamed on toxic waste from Chinese oil drilling (Pictured: an oil exploration project in Ethiopia)

It is also unclear what is causing the sickness, though many are suspicious it is caused by apparent chemical waste which has poisoned the region’s water supply.

‘It is the toxins that flow in the rainfall from Calub [gas field] that are responsible for this epidemic,’ victim Khadar Abdi Abdullahi said.

Mr Abdullahi, 23, from Jigjiga, was discharged from hospital when doctors told him there was nothing more they could do when he fell ill. He later died.

An adviser to the Somali regional government claimed there ‘are new diseases that have never been seen before in this area.’

‘Without any public health protection, it is very clear that POLY-GCL uses chemicals that are detrimental to human health,’ they added. 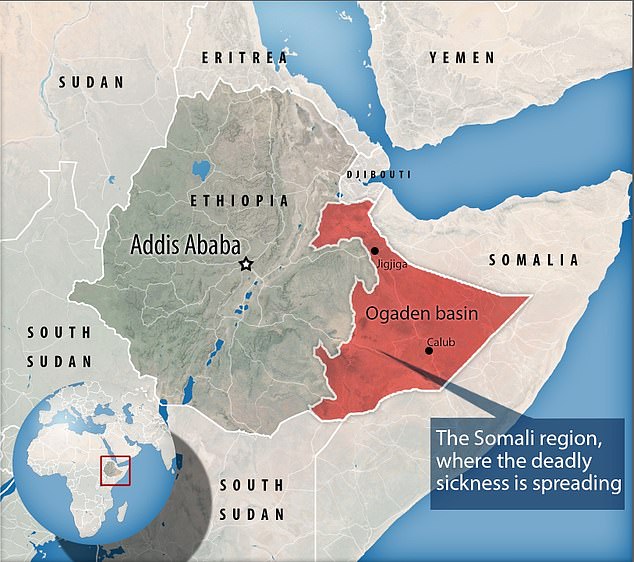 Pictured: The Somali region in Ethiopia, where the mystery illness has allegedly been spreading

The East African country found extensive gas deposits in its eastern Ogaden Basin in the 1970s.

POLY-GCL has been developing the Calub and Hilala fields there since signing a production sharing deal with Ethiopia in 2013. Calub, south-east of Jigjiga, is reportedly due to begin commercial gas production shortly.

One former engineer from the Chinese firm alleged there had been regular spillages of drilling fluids including sulphuric acid over the three years he worked onsite in Calub.

Another said ‘those indigenous to the land die from raw toxins spilled out of sheer carelessness. Operational companies in Calub have forfeited their duty to protect local people’.

But it is possible these chemical spillages may be historical, or may have been caused by the likes of Ethiopian transport firms.

Ketsela Tadesse, director of licensing at the federal ministry of mines and petroleum, said ‘all the gas wells at Calub and elsewhere in the Ogaden Basin, are sealed, safe and secured … according to international standards’. 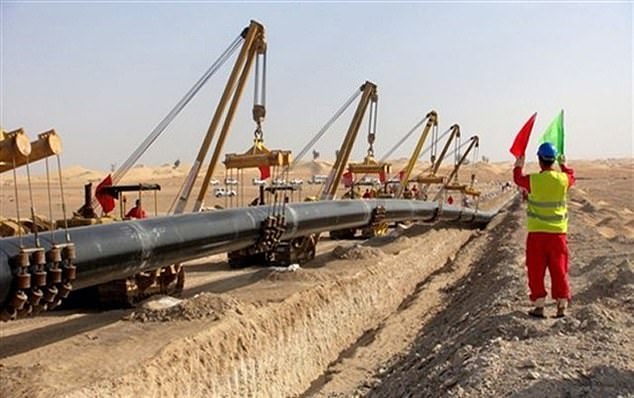 The sickness is reported to turn its victims’ eyes yellow, before causing a fever, swelling across the body and ultimately death (stock image)

Recently, POLY-GCL signed a memorandum of understanding with Djibouti to invest £3.1 billion ($4 billion) to build the natural gas pipeline, a liquefaction plant and an export terminal to be located in Damerjog, near the country’s border with Somalia.

It was envisaged that production would start in 2018, but the Ethiopian government said that was now likely to happen in 2020.

‘It is the most expensive project ever built in the Horn of Africa region,’ he said. ‘The two parties have reached an agreement in principle to allow them to benefit from the project in an equitable manner.’

Africa’s eastern seaboard could soon become a major global producer of liquefied natural gas, with other planned projects based on big gas finds made in Tanzania and Mozambique.