Vladimir Putin has signed into law changes in Russia’s constitution that will allow him to stay in power until 2036.

The Russian President, 67, put his name to an executive order on Friday which will bring the changes into force on Saturday.

It comes after he claimed victory in a referendum on the issue with 78 per cent of the vote, amid allegations of widespread vote rigging. 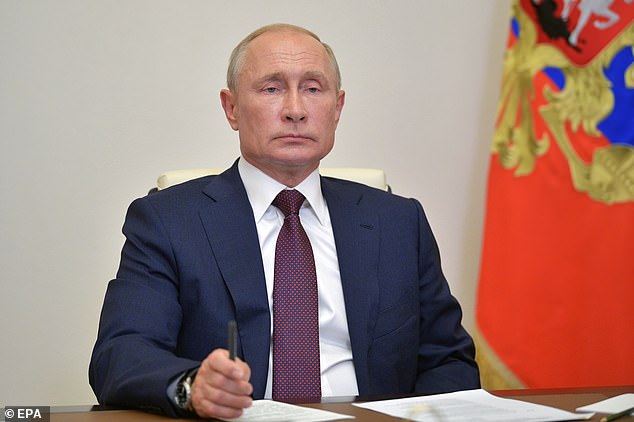 Vladimir Putin has officially signed an order changing Russia’s constitution to allow him to run for two more six-year terms, with the change to come into effect from tomorrow

Sergey Shpilkin, a renowned independent electoral researcher from Russia, estimated that as many as 20million ballots cast in Wednesday’s vote were falsified.

During the last presidential election he estimated that 10million votes were falsified, hinting at the potential scale of the operation.

‘We made this important decisions together, as a country.’

As well as extending Putin’s term limits, the alterations will outlaw same-sex marriage and mention the ‘belief in God as a core value’ in Russian society.

The new constitution will also emphasize the importance of Russian laws over all international laws.

Putin proposed amending the constitution in January and insisted on putting the language on his eligibility for office and the other topics up to a nationwide vote. 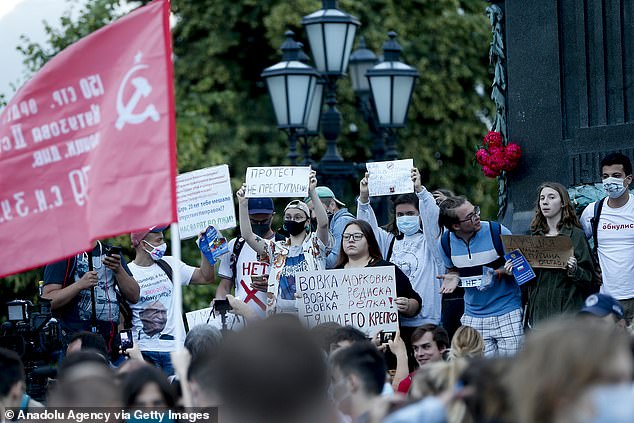 It comes after he declared victory in a referendum, widely believed to be rigged, that showed 78 per cent of Russians supported the move (pictured, people protest against the change)

The vote was not legally required because the changes had already been approved by parliament and rubber-stamped by the country’s Constitutional Court.

The citizens’ vote was initially scheduled for April 22, but postponed because of the coronavirus pandemic.

The balloting concluded on Wednesday amid widespread reports of pressure on voters and other irregularities, including ballot-stuffing.

Analysis found multiple precincts reporting close-to 100 per cent turnout. The higher the turnout, the more likely the ballots were to approve of the changes – strongly suggesting that ‘yes’ ballots were added to the boxes.

Kremlin critics denounced the results of the plebiscite as falsified and undermining the legitimacy of the amendments.

Central Election Commission Chairwoman Ella Pamfilova rejected the claims Friday, saying the results of the vote are ‘authentic’ and their legitimacy ‘indisputable.’

‘The vote was carried out with the utmost transparency,’ she said.

Russian President Vladimir Putin on Friday mocked a rainbow LGBT pride flag hung from the US embassy in Moscow, suggesting it reflected the sexual orientation of the diplomats.

During a televised video conference, a lawmaker told Putin that the US embassy had hung a rainbow flag on its facade for the first time to celebrate Pride month in June.

‘Who works in this building?’ Putin asked the speaker, Senator Alexei Pushkov, to be told ‘Americans.’ 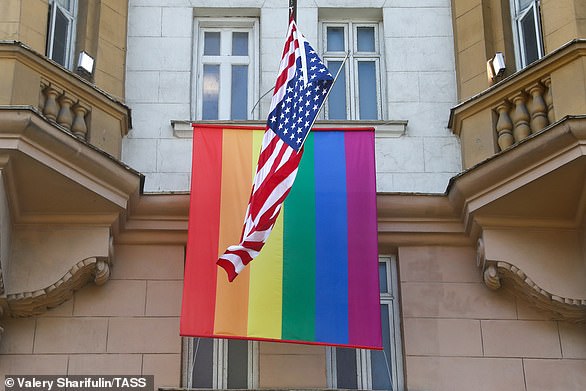 ‘Let them celebrate. They’ve shown a certain something about the people who work there,’ he added with a smile.

Putin on Friday signed amendments to the constitution backed by a national vote that include a clause on marriage being between a man and a woman, aimed at preventing legalisation of gay unions.

The president said Friday however that Russia does not discriminate against people on the basis of sexual orientation.

He said a law banning promotion of homosexual relationships to minors, which he signed in 2013 to a storm of international condemnation aimed simply to prevent the ‘foisting’ of such relationships on children.