Afghanistan war hero, 31, suffering from PTSD reveals how he was talked down from jumping off motorway bridge by Good Samaritan who then gave him a job

A suicidal Afghan war veteran revealed how he was talked down from jumping off a motorway bridge by a Good Samaritan – who then gave him a full-time job.

Jason Verez, 31, was diagnosed with post traumatic stress disorder after seeing his comrades wounded while fighting the Taliban.

Father-of-two Mr Verez served as an infantryman in the Princess of Wales Royal Regiment for four years before leaving the military in 2012.

He said on the day he was coming home on leave he saw a friend lose his limbs to an IED – and a few hours later was eating dinner with his parents at home in Surrey.

Mr Verez found work as a manager of a dog kennels but was made redundant last December, sparking his spiral into depression, and days before Christmas he climbed on top of a bridge above the M23.

He was about to jump to his death before logistics managing director Gary Knight drove past on his way home – and spent an hour persuading Mr Verez to come down before offering him a full-time driving job.

Mr Verez said: ‘It was the strangest day of my life. One minute I was about to jump off a bridge and then it turned into a job interview. 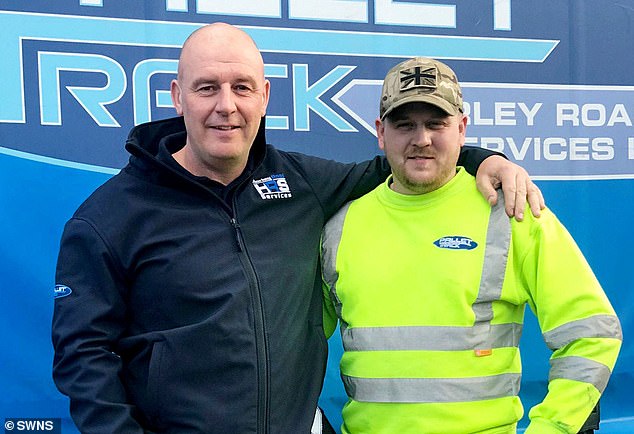 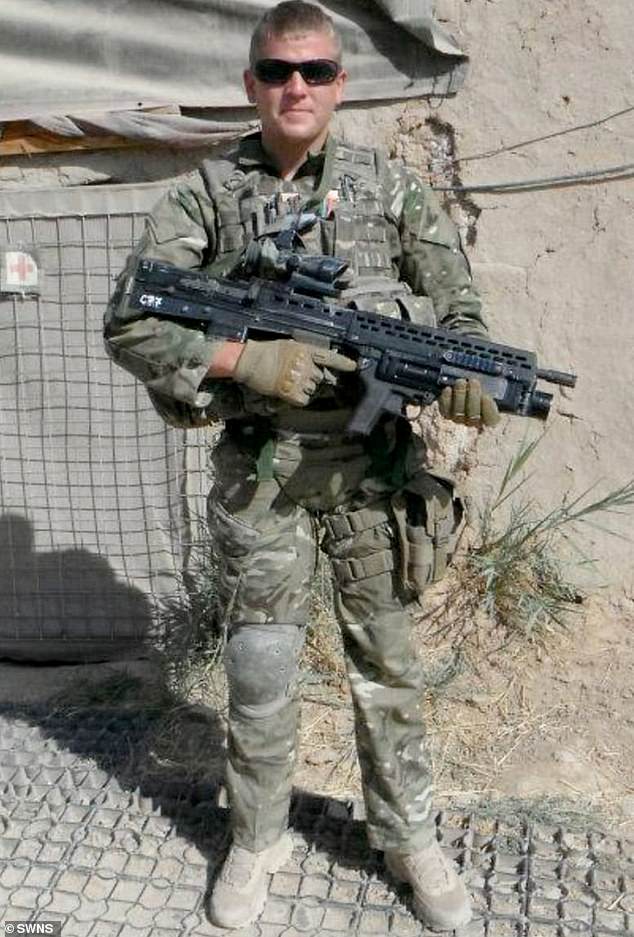 ‘I’m incredibly grateful to Gary. It’s turned my life around.

‘I found civilian life very hard, trying to get a job and I suffered from PTSD at the same time.

‘I would have nightmares every day, where I wake up screaming. I would not able to do things, even be a father to my children.

‘It puts you down and you feel quite depressed about things.

‘That day I was feeling very down, everything was sort of going wrong. I had got made redundant and I ended up going to a motorway bridge.

‘I was there for about an hour. Gary drove past and ended up turning around.

‘He got out the car was trying to talk me down. He phoned the police and they sent their negotiator.

‘Gary was even crying because I told him what was wrong and we go to chatting about my problems.

‘We talked about when I was in the army, how old I was, my family and it made him quite upset because he’s got kids too.

‘After I came down, he left his card and I contacted him after I got out of the hospital.

‘He said he would give me a job and I didn’t even have to interview. He asked me to turn up at eight the next morning, and I did.

‘I felt lucky that someone was out there and cares about other people.’

His said: ‘When I saw him standing on the bridge, I stopped the car and went over.

‘When I asked him if he was planning to do what I thought he was going to do, he said ”yes” and asked me not to come any closer.

‘However, we got chatting and I told him this was not the solution, especially when he told me he had a wife and young family.

‘Talking seemed to help as we both stood there in floods of tears.

‘After a while, he allowed me to call the police who arrived very quickly and he agreed to come away from the edge of the bridge.

‘When he went with the police I gave him my business card and later on that night, he called me to say thank you. 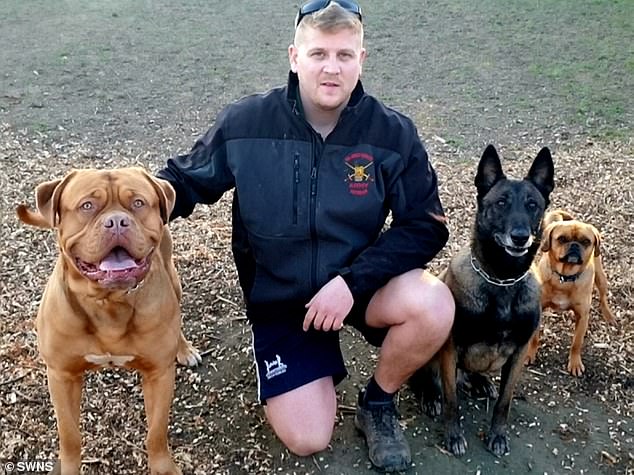 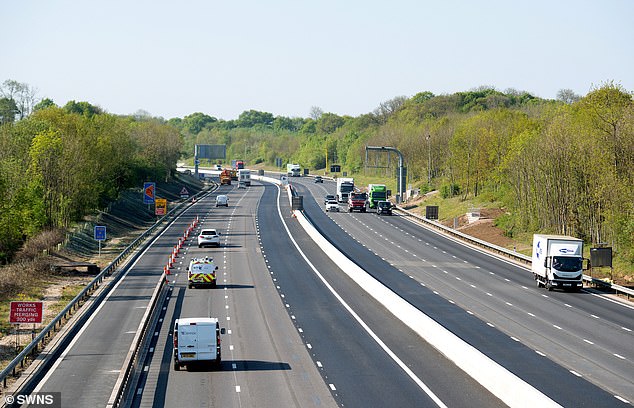 ‘I offered him a job there and then. The chat on the bridge was the interview and it was all I needed to know about Jason.

‘He is now working in the business. He’s doing really well, but he still needs help. The offer is there for time off when he needs counselling sessions.’

Mr Verez, who is married to Leanne, 28, and lives in Horley, Surrey, was left traumatised after he returned from a seven-month tour of Afghanistan in 2011.

He was a key member of an Advance Search Team which involved searching for deadly booby-traps in villages and Improvised Explosive Devices (IEDs).

He said: ‘In one instance, on the day I was coming home on leave, I saw a friend lose his limbs to an IED.

‘A few hours later I was at home in Surrey eating dinner with my parents.

‘It was a bizarre contrast and all too much for me to comprehend – it was far from normal.

‘Being a man it’s not really easy to talk. It seems to be a man thing where you have to be brave, especially the army. 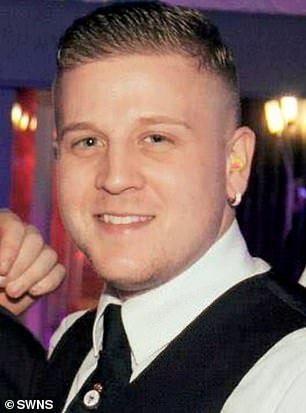 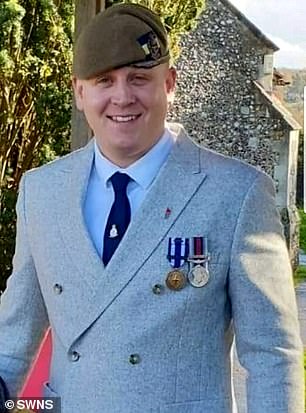 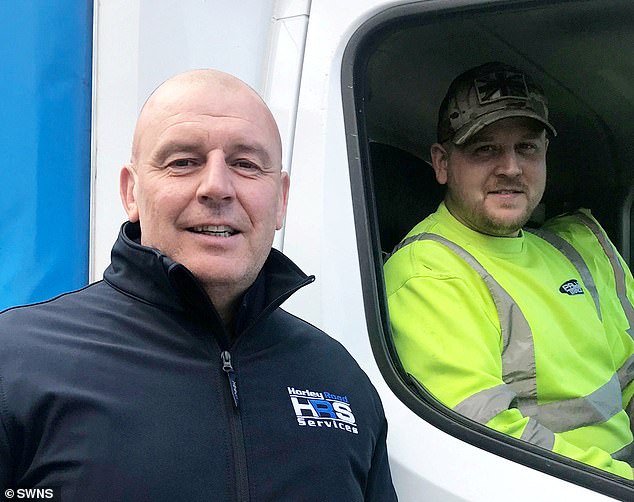 ‘I’m drilled into thinking that you can’t really show it. It’s why a lot of soldiers don’t really talk.

‘It’s really hard for civilians to understand what fighting in the army is like. I was willing to put my life on the line for this country.

‘You’re sacrificing yourself. When you get a shot at, it’s such a scary situation.

‘You see your friends get blown up next to you and then when you come back and you feel like it’s all for nothing.’

Mr Verez is now campaigning for the Ministry of Defence to improve the support given to veterans suffering from PTSD.

He added: ‘I want to help people like me to be able to return to civilian life and lead as normal a life as possible, without the threat of them taking their own lives.

‘My aim is to try and put the message out there because there is very little help supporting veterans.

‘There’s nowhere to talk, nowhere to go. So, you end up thinking I might as well kill myself. I’ve had quite a lot of friends kill themselves.

‘This has a terrible cost for families and is a damning indictment of the kind of society that we are.’

For confidential support, call the Samaritans on 116123 or visit a local Samaritans branch. See www.samaritans.org for details