Ukraine’s UN ambassador reads texts from a Russian soldier to his mother moments before he was killed: ‘Mama, I’m in Ukraine. There is a real war raging here. I’m afraid. We are bombing all of the cities, even targeting civilians’

Ukraine’s ambassador to the United Nations on Monday read out what he aid were the final text messages from a Russian soldier to his mother – describing his horror at the unfolding war before he was killed.

It came during an emergency session of the United Nations General Assembly to discuss the Russian invasion of Ukraine.

Ukraine’s representative, Sergiy Kyslytsya, made an impassioned plea for help, holding up a screenshot of the soldier’s texts.

‘Mom I’m no longer in Crimea,’ they began. ‘I’m not in training sessions.’

His mother asks: ‘Where are you then? Papa is asking whether I can send you a parcel.’

‘What kind of a parcel mama can you send me,’ he responds

‘What are you talking about? What happened?’

‘Mama, I’m in Ukraine,’ he responds, before describing the horror unfolding.

‘There is a real war raging here. I’m afraid. We are bombing all of the cities together, even targeting civilians.

‘We were told that they would welcome us and they are falling under our armored vehicles, throwing themselves under the wheels and not allowing us to pass.

‘They call us fascists. Mama. This is so hard.’ 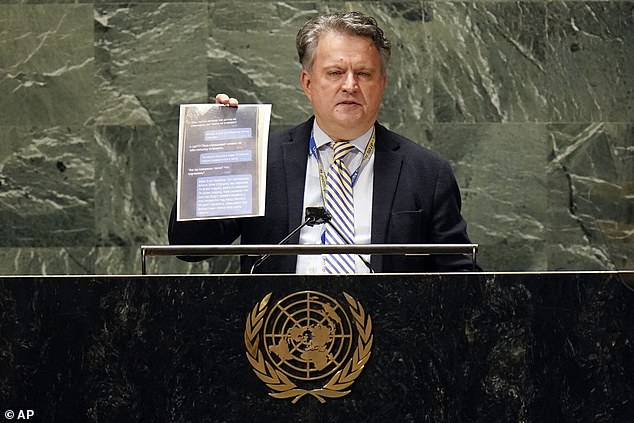 Ukraine’s ambassador to the United Nations, Sergiy Kyslytsya, on Monday read out what he said were the final text messages from a Russian soldier to his mother – describing his horror at the unfolding war before he was killed 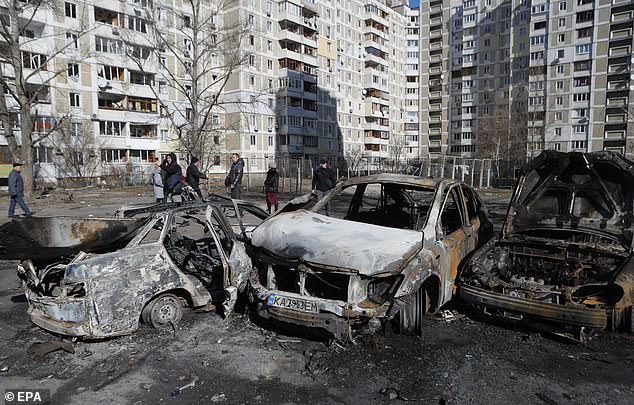 People walk past burned cars a day after a shelling on a residential area in the Ukrainian capital Kyiv. The country is enduring its fifth day of fighting after Russian invaded on Thursday 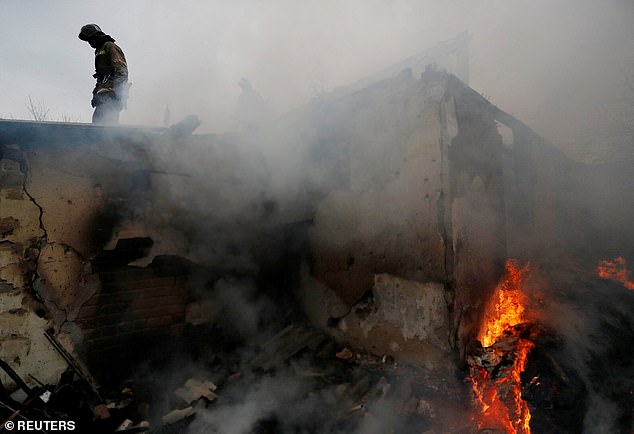 Firefighters tackle blaze at a house after recent shelling, in the separatist-controlled city of Donetsk, Ukraine, as the conflict rages into its fifth day

Kyslytsya concluded the exchange by saying the last message was sent ‘moments’ before the soldier was killed.

Details of the messages could not be immediately verified.

But Kyslytsya continued by comparing Russia’s actions with those of Nazi Germany, as he described a militarized state invading a smaller neighbor and deadly airstrikes on civilians.

‘Very clear parallels can be drawn with the beginning of the Second World War,’ he said.

‘And Russia’s course of action is very similar to what their spiritual mentors from the Third Reich employed on the Ukrainian land eight years ago.’

In 2014 Moscow annexed Crimea, beginning eight years of clashes in the eastern Donbas portion of Ukraine.

‘If he wants to kill himself he doesn’t have to use a nuclear arsenal, he has to do what the guy in Berlin did in a bunker in 1945,’ he said, in a reference to Hitler’s suicide.

Kyslytsya concluded his appeal with a warning that the international order depended on Ukraine’s survival.

‘If Ukraine does not survive… international peace will not survive,’ he said.

‘Have no illusions. If Ukraine does not survive, we cannot be surprised if democracy fails next.’

He spoke on the fifth day of fighting, during a frantic period of diplomacy.

Ukrainian and Russian officials held talks on the Belarus border, but they left without resolution.

President Joe Biden spent more than an hour on a secure call with allies and partners, discussing how to intensify pressure on Russia.

And the United Nations Security Council was due to meet to discuss ways to ease a growing humanitarian crisis.

The 193-nation General Assembly has fewer teeth than the security council and is often derided as a talking shop. However, its non-binding resolutions do carry political weight.

It will vote this week on a draft resolution demanding Russian troops withdraw.

After Ukraine’s pleas it heard a Russian rebuttal.

Russian Ambassador Vassily Nebenzia insisted his country had launched what he called a ‘special military operation’ merely to defend two breakaway regions in the east of Ukraine.

‘Russian actions are being distorted and thwarted,’ he claimed.

But earlier U.N. Secretary-General Antonio raised the alarm about the impact on civilians.