‘This situation is an emergency’: Harvey Weinstein begs judge to let him out of prison to see private dentist – fearing jail medics will pull out his rotten teeth and leave the holes unfilled

Harvey Weinstein has begged a judge to let him see a private dentist rather than have prison medics pull out his rotten teeth and leave gaping holes in his mouth.

The disgraced movie producer said his rotten molars had become a dental ’emergency’ as he pleaded with a judge at a Los Angeles courtroom.

Weinstein, serving 23 years after being convicted of sex charges in New York, said: ‘I will pay for the dentist … it will be one trip and one trip only.’

The 70-year-old is locked up ahead of an October 10 trial on charges he raped and sexually assaulted five women between 2004 and 2013. But in court Wednesday, he argued he should be allowed a bridge or fake teeth to look ‘presentable’ at the trial.

‘I’m in pain every day. I have cavities and I can’t eat because I’m missing teeth,’ Weinstein told Judge Lench, reports the New York Post. 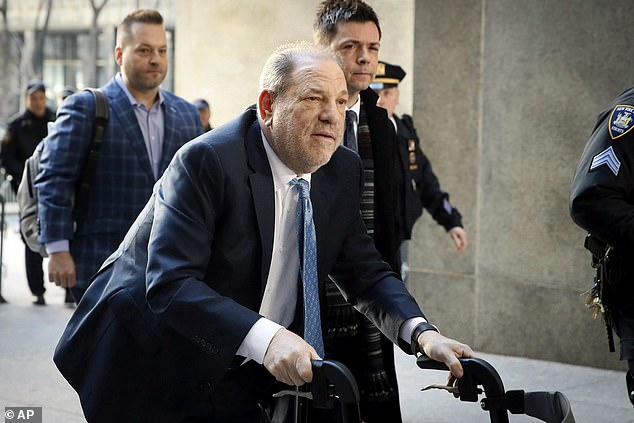 The disgraced movie producer’s lawyer, Mark Werksman, said that dentists at the Twin Towers Correctional Facility had told Weinstein he can either have his rotten teeth pulled out without any replacement, or leave them to continue decaying.

Mr Werksman claimed that if Weinstein is not allowed to visit a private dentist, it would be a violation of his constitutional rights.

The lawyer added that a gaping hole in the front of Weinstein’s mouth would make him look ‘ridiculous’ and ‘like a caricature’ ahead of his trial.

But Judge Lench told Weinstein that even though he is able to pay to transport himself to and from the private dentist, the trip would involve a number of staff from the Sheriff’s Department – meaning his request is beyond the norm.

Weinstein is awaiting his October 10 trial on charges including 11 counts of rape and sexual assault pertaining to five women in Los Angeles and Beverly Hills from 2004 and 2013.

During the hearing on Wednesday, prosecutors also asked the judge to let two witnesses who live in Italy to testify via video link rather than travel to the US for the trial.

The judge ordered witness Lubov Smirnova, who worked for one of Weinstein’s alleged victims and her family, to appear in person, reports the New York Post. But a second witness, Pascal Vicedomini, will appear via video due to medical reasons. 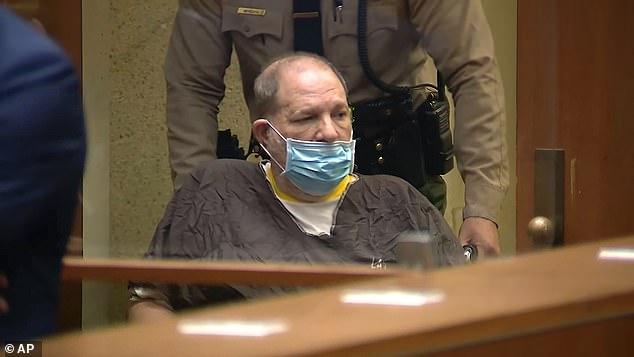 Weinstein (pictured in a LA courtroom in 2021), serving 23 years after being convicted of sex charges in New York, said: ‘I will pay for the dentist … it will be one trip and one trip only’

Meanwhile, in a separate case, New York’s highest court has agreed to hear an appeal from Weinstein over his 2020 rape conviction.

Weinstein was convicted in February 2020 in New York of forcibly performing oral sex on ‘Project Runway’ TV and film production assistant, Mimi Haley, in 2006 and raping an aspiring actress in 2013.

He was acquitted of first-degree rape and two counts of predatory sexual assault stemming from actor Annabella Sciorra’s allegations of a mid-1990s rape.

Weinstein was sentenced to 23 years in prison and is currently in custody in California awaiting his October 10 trial.

In June, he was also charged in Britain with the 1996 indecent assault of a woman in London.

It’s unclear whether that case will ever come to trial, as UK officials would have to decide whether to seek his extradition while he is already serving a lengthy sentence in the US.

In total, nearly 90 women including Angelina Jolie, Gwyneth Paltrow and Salma Hayek have accused Weinstein of harassment or assault. He denies all the allegations.