Amsterdam: For tulip growers in the Netherlands, Friday March 13 was a true horror show. When tulip stems came up at the country's largest flower market in Aalsmeer, the prices stalled over and over again at zero.

Frank Uittenbogaard, a director of JUB Holland, a 110-year-old family farm in Noordwijkerhout, made the tough decision to destroy his tulip stems — 200,000 of them.

"That hurt a lot," he said in a telephone interview. "It's very painful because you start in July with digging the bulbs and you have to give them the right treatment to plant them in October, and later move them to the greenhouse. We had very good quality tulips this year. I took my bike and went cycling when they did it because I couldn't handle it." 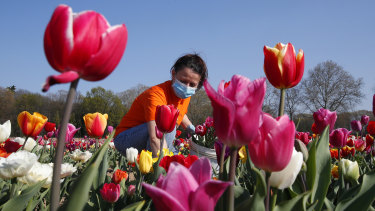 A woman wearing a sanitary mask to protect against coronavirus picks tulip flowers to be home delivered, in the “Tulipani Italiani” tulip field, planted by a Dutch couple to recreate the tradition in the Netherlands where you can pick your own tulip, in Arese, near Milan, Italy.Credit:AP

He wasn't the only grower who had to dump tulips. About 400 million flowers, including 140 million tulip stems, were destroyed over the past month, estimates Fred van Tol, manager of international sales for Royal FloraHolland, the largest cooperation of flower and plant producers in the Netherlands.

Demand for tulips dropped precipitously as flower shops around the globe have shut down because of the outbreak, consumers have gone into lockdown and celebrations have been cancelled.

"This virus hit us right in the middle of the tulip sales," van Tol said. "In total, four weeks out, the turnover is still 50 per cent lower than last year." 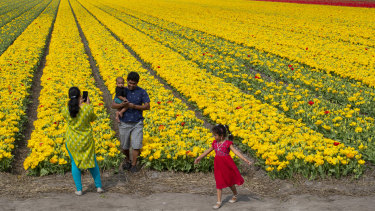 A family takes images in a field of tulips next to the main road in Lisse, Netherlands, on Sunday. Many Dutch tulip growers have destroyed their flowers this year.Credit:AP

Usually, the period from March through May — including the weeks in which International Women's Day, Easter and Mother's Day fall — is the Dutch flower industry's strongest season. It pulls in €7 billion ($12 billion), with an average of $47 million in flowers sold daily.

The Netherlands, which has recorded more than 24,400 coronavirus cases and 2643 deaths, has put in place a moderate social policy to combat the spread of the virus without going into a full lockdown. Schools, restaurants, bars, museums, sports facilities and gyms are closed until April 28. Most events of more than 30 people have been banned until June 1.