As of Friday, there were 440 active coronavirus cases in Victorian aged care facilities, involving 342 residents, and 98 staff. According to federal Health Department data, there are currently 25 different active aged care outbreaks of one case or more in facilities across the country, most of which are in Victoria. The large majority of the positive residents are vaccinated and asymptomatic, according to a federal Health Department spokeswoman. 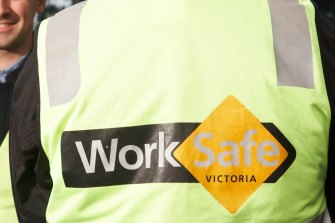 WorkSafe Victoria has issued notices to at least 30 aged care providers overseeing about 50 homes, requiring them to prove they did not breach Occupational Health and Safety laws during the deadly outbreaks.

Legal advice prepared for some of the aged care facilities which have received OH&S notices compelling them to provide information and documents – and which has been leaked to The Sunday Age – warned operators found guilty of breaching workplace laws that led to the deaths of residents could be charged under Victoria’s new workplace manslaughter laws.

The laws, which are not retrospective, came into effect on July 1 last year. Organisations face maximum fines of $16.5 million, and executives face jail terms of up to 25 years.

News of the WorkSafe investigations come at the end of the first of six weeks of coronial inquest hearings into what led to Australia’s most deadly aged care outbreak at St Basil’s Homes for the Aged in Melbourne’s north. That outbreak began last July, and finished in August with 45 residents dead.

The Age has independently confirmed those among the list of providers issued with notices include Estia Health Aged Care, Japara Healthcare and Benetas Aged Care.

Benetas St Georges in Altona Meadows has had 70 COVID-19 cases in total, including 38 staff and 32 residents. Twelve of the infected residents died. Japara has had outbreaks in eight different Victorian facilities, with the highest number of resident deaths at Japara Goonawarra in Sunbury where 20 people died.

A spokeswoman for Estia Health confirmed four of its seven facilities which have experienced outbreaks have received WorkSafe notices – including Ardeer which had 17 resident deaths, Keilor which has seen six deaths, Heidelberg West which has seen 10 deaths and Glen Waverley where there have been no deaths but six infections.

The WorkSafe notices are a precursor to a formal investigation, and require facilities to answer a list of questions related to who was responsible for infection control, contact tracing efforts, the provision of personal protective equipment and surge workforce plans. 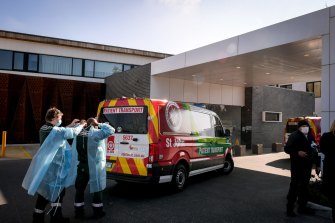 They also require the handover of documents including rosters, outbreak management plans, training materials and lists of all residents and staff.

There are already active WorkSafe investigations into St Basil’s, Kalyna Aged Care, Kirkbrae Presbyterian homes, Mecwacare and Epping Gardens which began late last year and early this year. If WorkSafe glean enough evidence to warrant charges, they must issue them within two years from when an offence occurred.

The federally funded and regulated private aged care sector has previously pointed the finger for some of the COVID-19 aged care crisis at the federal government, with more than 1500 aged care homes nationally having their requests for masks, gloves and gowns from the national medical stockpile knocked back as the pandemic spread.

As well as WorkSafe Victoria, Victorian aged care facilities are regulated by the federal Aged Care Quality and Safety Commission, which is also tasked with examining a provider’s performance against the Aged Care Quality Standards.

“It’s no secret there has been tragedy in aged care over the course of COVID-19. It’s been an extremely difficult time for everyone, including older people, families separated from their loved ones and not least our workers who have been stretched to the limits,” he said.

“The sector’s response to this deadly pandemic has been a huge feat and is a testament to the hard work and passion of our workforce.

“WorkSafe Victoria must guarantee that its investigation does not distract providers and staff from the first priority of keeping residents safe. There are active COVID-19 transmission across Victoria, with outbreaks occurring in aged care homes.”

Sean Rooney, chief executive of another peak body, Leading Age Services Australia, said his organisation was aware of WorkSafe’s investigations and letters of notice but said it was inappropriate to comment further.

“We are aware of Worksafe investigations which relate to outbreaks in Victoria in 2020,” she said.

“Worksafe is an independent Victorian government body and these investigations do not involve the Commonwealth.”

Have information about this story? Email the journalist securely at [email protected]